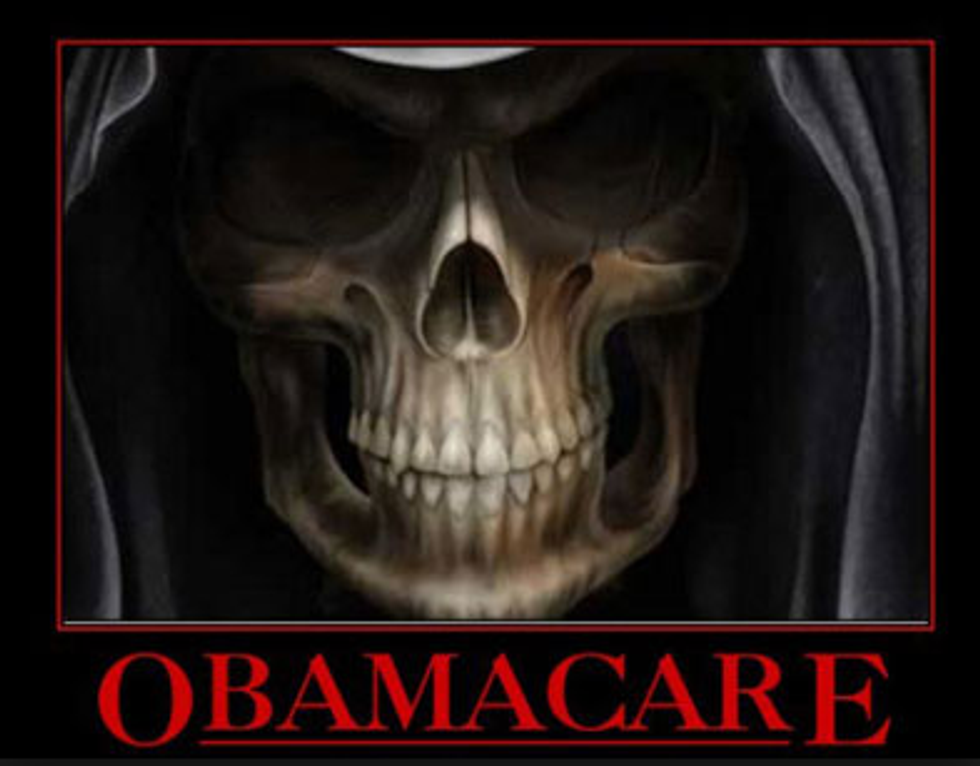 The Texas House did something gross, because it is the Texas House, try not to faint from surprise. House Bill 1514, approved by a vote of 129 to 8, would require that a special designation -- "QHP" -- be added to insurance cards for plans purchased through the Affordable Care Act's online exchanges, just so your doctor knows how gross you are. Originally, the bill included the designation QHP-S, which would have added an extra special "fuck the poors" scarlet letter to the insurance cards of people who qualified for subsidies under Obamacare, but that part was removed from the final bill that passed, which liberal blogs and mainstream newspapers would know if they READ A GODDAMNED BILL ONCE IN A WHILE:

Supporters of the bill say that the labels will help doctors understand the type of insurance coverage a patient has and remind patients to continue with their insurance payments, according to the Texas Tribune.

Neurologist Dr. Sara Austin testified on behalf of the Texas Medical Association in support of the legislation. In her written testimony, Austin said that insurance companies provide individuals with a 90-day grace period when they fall behind on their payments. Insurance companies must offer insurance for the 90 days, but if the individual does not pay at the end of the three months, insurance companies can terminate the insurance and demand a refund from doctors for the final 60 days of the grace period, according to Austin.

So, even though Obamacare plans are just private plans that happen to have been purchased through an online exchange (RUN BY THE TYRANT OBAMA), lawmakers are saying Texans need this special designation, just so your doctors can remind your stupid ass to pay your insurance premium. Because apparently nobody understands that, and surely not the poors.

This will be extra helpful, because it will let your doctor know that you are one of the America-haters -- an independent contractor or small business owner, or maybe a gross poor who finally has some goddamn health insurance -- who are spreading the santorum of Obamacare socialism all over the nice doctor's office, and worse, you are HAPPY about it.

The bill was sponsored by a certain Rep. J.D. Sheffield (R-surprise!), who obviously knows this is necessary because he is a doctor. How gross is Sheffield? Gross enough to sponsor this bill, but maybe not 100 percent gross all the time, it turns out. The Texas House passed a bill recently to get rid of a pesky exception in the state's ban on abortions past 20 weeks of gestation, that allowed for abortion in certain cases where fetal abnormalities were present, the types of things that cause fetuses to die in utero, or only survive a very short time after birth. The bill has been tossed back to committee, but during debate, Sheffield used his medical expertise for good!

Rep. J.D. Sheffield, R-Gatesville, a family physician, said forcing women to carry their pregnancies to term in these cases was “unethical.”

“Why should the heavy hand of government come into that most heart-rending decision?” Sheffield asked lawmakers before the vote.

Indeed! Oh and Sheffield believes that vaccines are good and normal, and that children should have them, so he is obviously a RINO.

But when those kids grow up healthy, due to not dying from eradicated diseases, they'd better not get any of that filthy socialist Obamacare, otherwise they're gonna need a STAMP on their dirty insurance cards.