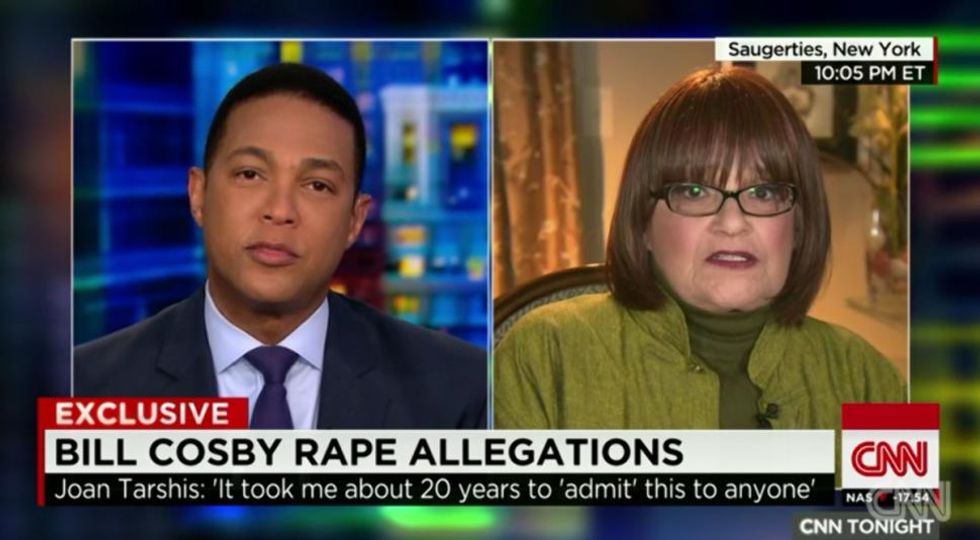 People say a lot of stupid things. And throughout all of 2014, you'd be hard-pressed to find more people saying stupider things in one place than on CNN.

From racist segments making fun of primitive natives to giving airtime to every headcase with no obvious spelling errors on their handmade cardboard signs, 2014 was the year CNN went from bad to embarrassing to just really sad. If CNN really still is "America's Most Trusted Name in News," then we are so screwed.

Here are the 10 worst times CNN really half-assed it this year.

It's hard to imagine how correspondent Jeanne Moos could have made this April segment on a royal visit by Prince Charles and Kate, the Duchess of Cambridge, to New Zealand into such an embarrassingly racist mess, but here we are. From mockingly using Maori music as an exotic backdrop to comparing tribal warriors Chippendales dancers, this clip is unbelievably hurtful:

CNN's not afraid to ask the really tough questions, like how the KKK could "rebrand" itself literally a week after one of its members shot up two Kansas Jewish institutions, murdering three people. (The headline below was lazily changed from the original, "Can the Klan Rebrand?")

Here's the unforgettably terrible opening line: "Pointy hats, white robes, crosses burning, bodies hanging from trees." To CNN, these are all P.R. problems for the Klan, which has obviously been smeared as some kind of Neo-Confederate terrorist organization instead of the friendly neighborhood ol' boys club they are now.

It even went to great lengths to let KKK leader Frank Ancona whine about how the Klan was the real victim here:

Brand expert Laura Ries suggested that the KKK should find its own Cool Pope Francis, because "Look at what that guy has done. You have to have a leader like that to make people believe a change has happened." Maybe they can swap tips on big pointy hats!

8. Crazy Misogynist Rants About How Women Should Love Catcalling

In November, CNN's Fredericka Whitfield aired a segment on the viral catcalling video that brutally exposed how often women walking alone in New York City get harassed by strangers. So far, so good -- until guest and absolutely bonkers "dating expert" Steve Santagati arrived on the scene to claim, "There is nothing more that a woman loves to hear than how pretty she is." Instead of cutting this deranged self-declared "bad boy" off, CNN let him continue for, like, seven freakin' minutes:

"It's just another example of a lot of feminists that have an a la carte attitude towards it, meaning you can do this, I want this sort of thing, but they take it too far," Santagati claimed. "It's kind of like, this thing bordered on 'The Boy Who Cried Wolf,' like where's it gonna go next?" Then he demanded that "strong women" put their money where their mouth is and confront their harassers. (Great tip!)

Later, he told co-guest comedian Amanda Seales that if she didn't like getting cat-called, well then she could just man up and buy a gun. He's just full of good ideas!

It should have been clear well in advance that Santagati was a nutjob, so why bother having him on? Because CNN does not give a fuck.

7. Bill Nye Debates Soulless Harpy On Whether Scientists Are Too Mean

Climate change is real. (Duh.) But on a May episode of Crossfire, Bill Nye was forced to debate S.E. Cupp over whether it's fair that scientists are being really mean to climate change deniers.

"Isn't it a problem when 'science guys' attempt to bully other people?" Cupp asked. "[Guest Nick Loris of the Heritage Foundation] here had to say, 'I'm not a denier.' He had to get it out: 'I'm not a denier.' Because really, the science group has tried to shame anyone who dares question this, and the point I'm trying to make is, it's not working with the public."

Nye informed Cupp that climate change reports are intentionally scary because that's the way reality works. "This third [NCA] report came out, saying it's very serious. You say no. There's the essence of the problem. The science, the researchers say yes."

Rather than bore you with a bunch of facts and figures about how the planet is literally dying, later that year CNN let crazed Weather Channel co-founder John Coleman tell the American public that "there's no question about it. Climate change is not happening." Coleman, by the way, thinks that the "global warming scam" is some kind of evil plot to take our freedoms away. Perhaps even our precious bodily fluids.

Whiskey-swilling racist Ted Nugent thinks that calling the nation's first black president a "Chicago Communist-raised, Communist-educated, Communist-nurtured subhuman mongrel" is totally A-okay because of course he does. But instead of politely ignoring or mocking him like the rest of the civilized world, CNN decided they'd better just have Ted on to debate Erin Burnett about whether he's being smeared by liberal PC thugs.

During the interview, Nugent found the time to drop a couple other deluded fictions -- like that he had conducted "federal raids with the DEA and ATF and U.S. Marshals and the FBI and Texas Rangers."

CNN reporters Don Lemon and Chris Cuomo were on the scene as Ferguson authorities announced that kid-killing Officer Darren Wilson was off the hook. Since it was obviously an extremely sensitive moment of pain for the entire community, CNN covered it with eloquence and gravitas.

Just kidding! Crotchety old geezer Lemon took the occasion to crack that "obviously there is the smell of marijuana in the air":

Later, Lemon and Cuomo were hilariously routed by tear gas. CNN apparently couldn't book an expert on chemical weapons to explain the concept of gas masks to them like they were five.

4. CNN Claims Ebola is the "ISIS Of Biological Agents"

CNN is clearly brave enough to pitch "the stupid Ebola questions." Probably the dumbest one was an attempt by CNN Legal View hostess Ashleigh Banfield to cram ISIS and Ebola into one hot viral mess.

When Banfield asked NYU infectious disease expert Amar Safdar what's stopping ISIS from injecting themselves with Ebola and spreading it to our innocent schoolchildren, it took the poor guy less than a minute to completely debunk this insane theory:

Because God forbid that Aslan got a little angry when Maher basically equated the whole Muslim world with ISIS. But in CNN's world, it's not racist to ask whether Islam is barbaric. They're just wondering, y'know?

"The Muslim world is responsible for a really big part of religious extremism right now," Cuomo continued. "And they are unusually violent. They're unusually barbaric in the places where it is happening. And it's happening there more there than it is in other places. Do you therefore want to generalize? Of course not. But you do want to call a situation what it is."

2. Don Lemon Asks Whether It's "Preposterous" That Malaysia Airlines Flight 370 Disappeared Into a Black Hole

During a wholly unnecessary March segment on the disappearance of MH370, Lemon asked "is it preposterous" to speculate whether the flight vanished into a black hole.

While any answer other than a slack-jawed stare or flipping the bird would have been giving the question too much credit, former Department of Transportation Inspector General Mary Schiavo informed Lemon that "A small black hole would suck in our entire universe, so we know it's not that." (For what it's worth, Schiavo was also wrong in her explanation of black holes, which obviously do not suck in everything.)

Elsewhere, CNN polled Americans on whether other culprits like "time travelers or beings from another dimension" could have stolen the plane for sinister purposes:

The fun didn't end there. Lemon and Brad Meltzer additionally pondered whether spooky ghosts could have stolen the plane:

If Lemon had consulted a detective agency maybe he would have found out it was Old Man Jenkins the whole time.

While interviewing alleged Bill Cosby rape victim Joan Tarshis in November, Lemon proceeded to give himself an on-air lobotomy as he humiliated his guest. First Lemon suggested that perhaps she wasn't really raped because  "there are ways not to perform oral sex if you didn't want." Perhaps sensing he was beating around the bushes a little too much, Lemon laboriously clarified that he meant "the using of the teeth, right? ... as a weapon."

A stunned Tarshis could only respond "Yeah, I didn't even think of it."

Lemon added, "I had to ask." But he really didn't.