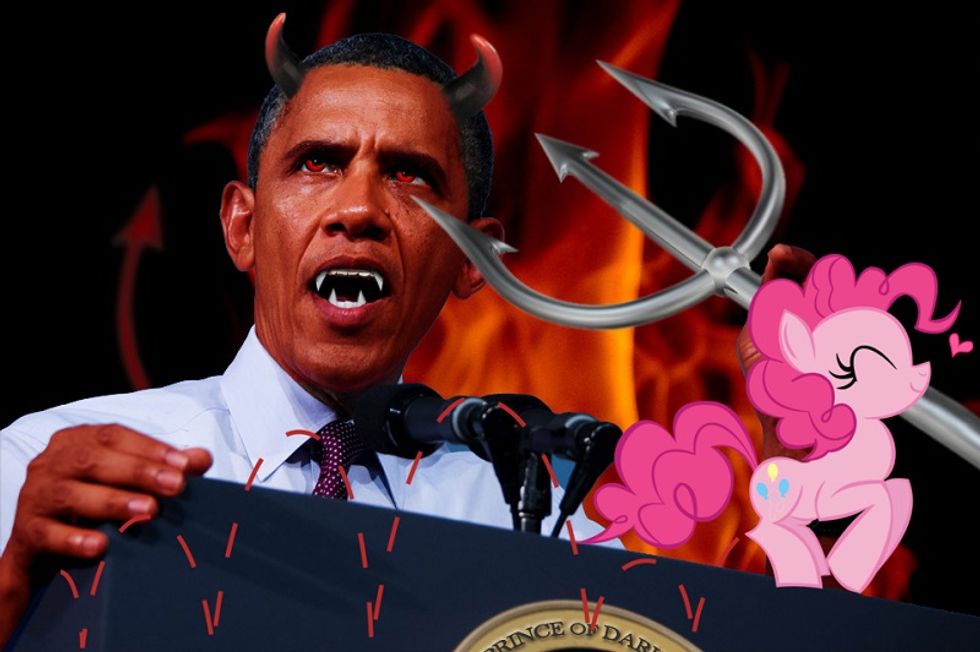 Hope you enjoyed your Blood Moon this morning -- it's a sign of the Apocalypse! So is the fact that our morning bagel showed us a vision of Satan gnawing on the bones of the damned. But that could just say more about the quality of bagels available in Boise.

In any case, you'll be delighted to know that yet another Very Serious Bible Researcher has found incontrovertible evidence that Barack Obama is The Antichrist, or -- just so all bases are covered -- a precursor to the Antichrist. Only this isn't just some wacko who looks at Obama and says, yup, tyrannical overlord, has to be the Antichrist. No, this analyst, Jonathan Wright, used the tools of science -- that is, the "Bible Code," which as we all know from website ads is an infallible means of unlocking the hidden meaning of the Bible to get rich and predict the future! Oh, sure, some people try to debunk the Bible Code, but it's totes reliable -- just ask the pastor who used it to become a millionaire! Or President Mitt Romney, whose election in 2012 was foretold by the Bible Code.

Mr. Wright explained his research on Obama's definite Antichristicality to fundagelical podcaster Rick Wiles, who has never heard a crazy idea he didn't like. For instance, it's not just the Bible Code that proves Obama's the Antichrist -- it's also his fake gay Muslim wedding ring, which is an absolutely true thing:

Wiles: So either Barack Obama is the Man of Sin, commonly known as the Antichrist, the Bible doesn’t say ‘Antichrist’ it says ‘Man of Sin.’

Wright: That’s right. Those are my only — I’ve tried to look at this as an investigation not with an agenda, by the way, but what I’ve come up with those have to be the possibilities. Let’s just face it, he’s got a ring on that says, ‘There’s no God but Allah and Mohammad is his Messenger.’ Now, by definition, that’s Antichrist.

But besides narrowing down the search for the Antichrist to the world's 1.6 billion Muslims, plus any black president one thinks might be a Muslim, Wright also searched out the Bible Code connections between the names "Obama" and satanic terms like "Beelzebub," "Lucifer," "the Beast," and "Hayley Mills in The Parent Trap," and found amazing correlations every single time! And did you know that Obama's armored limousine is nicknamed "The Beast"???? It's almost as if some smartass in the Secret Service went trolling with that one.

And if you needed any more proof, because you are some kind of skeptic who learned critical thinking even though you attended a school in Texas, this should clinch it for sure: Remember that one time a fly landed on Obama and he just cold swatted it? Well that is probably proof that Obama is connected to Satan, too!

“And there’s always the photos that you see everywhere with the flies landing on his face,” Wright told Wiles, “I can show you in the codes where he’s got a strong connection to the Lord of the Flies, Beelzebub.”

“I call him Beelze-lip,” Wiles added. “Because he had those flies stuck to his lip.”

Yr Wonkette has also received unconfirmed reports that Obama killed Piggy so he could control the conch, but we must caution that we are waiting for further analysis from Dr. Jerome Corsi, PhD.

Also, too, Mr. Wright was very careful to point out that he has “nothing against” Obama, because doing Bible Science is not a matter of injecting your personal opinion -- he's just reporting the facts as he finds them:

“I really didn’t want the American president to be ‘the AC’ or the Man of Sin, it just looks like he’s the forerunner and we’re not looking for a needle in a stack of needles by the way.”

Thank goodness for the objectivity of science! Why, if people could just look at the Bible and take out any crazy message they think is in there, that would be chaos, now wouldn't it?