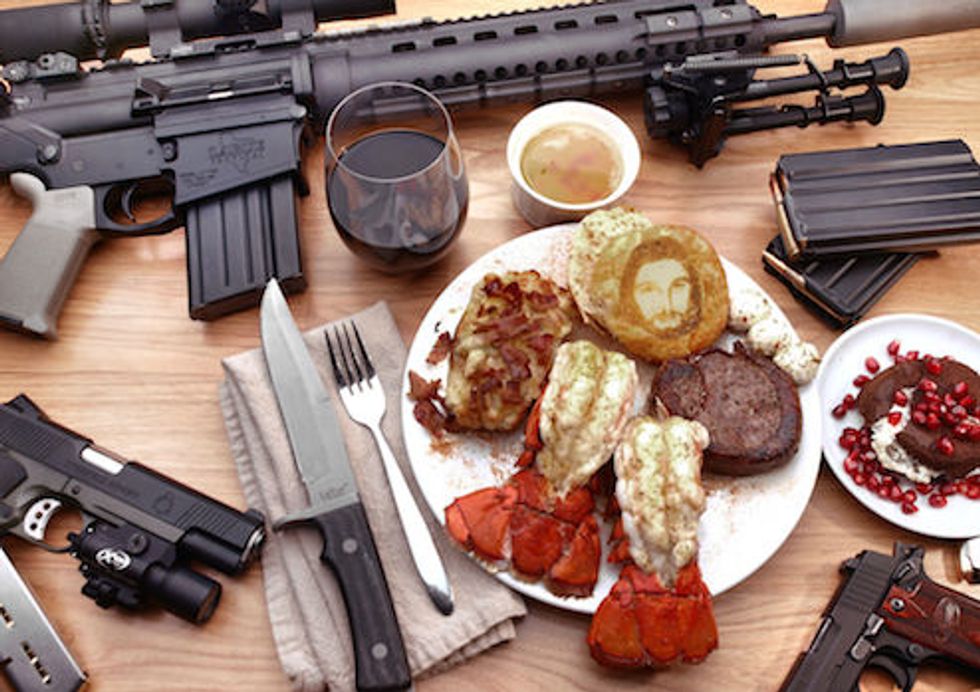 Though the gun humpers are hell-bent on humping their guns everywhere, they've recently suffered some setbacks with places like Target and Chipotle taking away their god-given Second Amendment freedoms by not letting them roll into the store on a tank or whatever. But all is not lost! The Blaze has found some completely random restaurant in Tennessee that loves them some guns, which totally proves oh good lord we have no idea what it proves. But lack of a news hook doesn't stop The Blaze from giving this rustic restaurant paradise the longest, slowest, most loving tongue bath ever.

Sharma Floyd, owner of Shiloh Brew and Chew, adopted a gun-friendly policy after she read about other restaurants banning firearms, WBIR-TV reported.

“[The other restaurant] had put up a sign that said ‘No Weapons Allowed’ and they were robbed at gunpoint two days later,” Floyd recounted. “That got me thinking.”

She posted a “Guns are Welcome” sign on the front door of her establishment about a month ago, and since then, she says business has really picked up

Is it just us, or did you at first assume that "Brew and Chew" referred to an establishment where one drank beer and also too chewed tobacco, instead of a bar and grill type place? Apparently this is not an uncommon mistake.

Floyd said Shiloh Brew and Chew is often confused as a bar or tobacco store instead of a Southern style restaurant.

"Brew is for coffee, chew is for food. So in my mind, my concept all went together. But after I made a $3,000 sign and paid for it, I realized that was not a good marketing idea," laughed Floyd. "But the 'Guns are Welcome' signs have helped boost business."

Even once we sorted out that this place was a restaurant instead of a vast collection of spittoons and kegs of Coors Light, it still didn't sound like a place we would ever want to go. Particularly since it now includes a bunch of yahoos armed to the teeth.

“There have been as many as eight people in here at one time who I know for a fact had guns,” Floyd said. “And no one would have known it except I know them personally. They’re law abiding, god fearing, Christian people. And that’s what I stand on. That’s what my restaurant is based on.”

Your restaurant is based on guns? Oh well. We've all got our thing that makes us special, and we suspect at Brew and Chew that it is not the food that makes for a standout experience. And now The Blaze has put you on blast, BrewChew, which means that literally tens of gun nuts will be knocking down your door for some homestyle gun-flavored cooking. Lucky!