The Duggar Interview: Why Won't The Liberal Media Stop Molesting Our Kids? 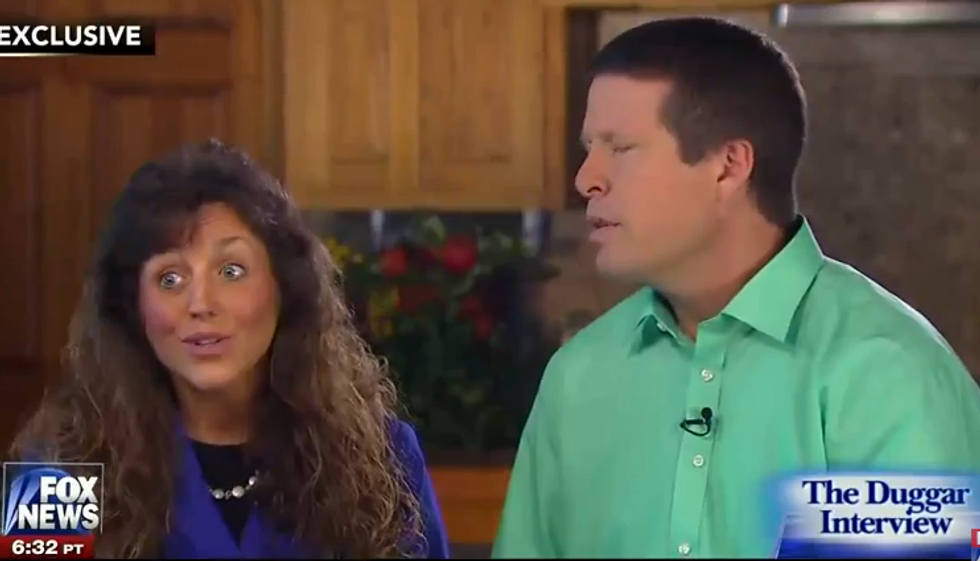 Did you watch the EXCLUSIVE Megyn Kelly interview with Jim Bob and Michelle Duggar last night? The one where Megyn Kelly said she wasn't going to give them some sort of interrogation about how their son Josh molested his sisters, because hey, look over there, Bill Clinton? If you have been living inside a rock, all you need to know is that Josh Duggar, eldest son of Jim Bob and Michelle, molested five girls, including four of his sisters, starting when he was a teenager. One of his victims was 5 years old at the time. His parents did very little in the way of reporting the crimes, and everybody has been forgiven by Jesus now, HALLELU!

So how horrible do Jim Bob and Michelle Duggar come off in this interview? Just as horrible as you expected, only worse than that. Let's watch the interview together and learn about all the other gross things:

Josh touched the kids' vaginas through their clothes, no big

Josh's mommy says he made "really bad choices" when he was a teenager, and his daddy says it was because he was "just curious about girls." In fact, according to Jim Bob, it wasn't even THAT rapey, because Josh just "touched them over their clothes while they were sleeping." Uh huh. Go on, Jim Bob:

This was not rape or anything like that, this was like, touching somebody over their clothes, there were a couple incidents when he touched them under their clothes, but it was like a few seconds, and then he came to us and was crying and told us what happened. And it was after that third time he came to us is where we really felt like, you know what, we have done everything we can as parents to handle this as parents, we need to get help.

See, it was just a few seconds, and there is a well-known Five Second Rule when it comes to how long you get to feel up your sisters.

Megyn Kelly points out that there were incidents when the girls were awake, but Jim Bob says "they didn't really understand what had happened." Besides, says Michelle, the true victim was Josh's heart, because "he knew it was wrong" and the girls "didn't even really understand it was an improper touch."

Jim Bob says that after Josh molested the 5-year-old, they realized they had to get him out of the house and to the unlicensed Christian "counselor" who "really reached his heart." ALL BETTER! (More about that counseling here.)

Jim Bob also talked to other parents -- other members of their religious cult, most likely -- and found out that "they've had similar things happen in their families." Huh! Is that normal, or is that a Christian fundamentalist Quiverfull problem?

And anyway, the Duggars sent Josh for help. In fact, Michelle says, "All of our children received professional counseling" after the molestation incidents, though we know a bit about what Duggar Counseling looks like, so color us skeptical. But the Duggars weren't skeptical! And after that "counseling, Josh was no longer a threat, says his dad, "Not at all."

Plus, they put in "safeguards" after the unfortunate incident of Josh's heart molesting his sisters. "We don't let boys babysit," Michelle says. "They don't play hide and seek together." And little girls are only allowed to sit on Daddy's lap, because otherwise, gonna get molested. Jesus, these people.

MEGYN KELLY ACTUALLY ASKED A QUESTION. Here, in toto, is one of the most uncomfortable exchanges in the history of interviews, about the evil, nasty robocalls Michelle Duggar made in opposition to a Fayetteville, Arkansas, nondiscrimination ordinance:

Michelle: I think that protecting young girls, and not allowing young men, and men in general, to go into a girls' locker room, is just common sense.

Kelly: But this is different because you injected child molestation into it.

Jim Bob: I think you actually said "pedophile" in that, and actually a pedophile is an adult that preys on children. Joshua was actually 14, and just turned 15, when he did what he did, and I think the legal definition is 16 and up, for being an adult preying on a child. So he was a child preying on a child.

See, it's okay! Josh Duggar was a full 300-something days shy of his 16th birthday the last time he did things to his sisters, and the law clearly states you have to be 16 to be considered a child molester. Good thing Josh got his diddling in right under the wire! So the Duggars are NOT hypocrites, and trannies are the real abusers.

We would like to point out now that Ma Duggar's body language is so weird, as she seems to be CONSTANTLY looking to Jim Bob for approval for what she's about to say. Back to the transcript:

Kelly: What I'm asking is, can you understand the critics' reaction to this news?

Michelle: I can understand that, but I think we've never, I know that everyone of us have done things wrong, that's why Jesus came! I feel like this is more about [HUGE PAUSE] there's an agenda, and there's people who are purposing to try to bring things out and twisting them, to, to hurt and slander.

POOR BABIES! This is a couple who have made millions of dollars promoting their fucked up, patriarchal "Christian" cult, and in the process have used their positions to do real harm to LGBT people, and it just hurts their feelings SO BAD when the truth comes out about how they shielded their child-molesting son. We're assuming that, in the Duggars' view, Satan is leading this attack.

So why did the Duggars go ahead with their big media-whore reality teevee show? Because, according to Jim Bob, all those bad things were in the past. Also, they were told that "under law, there's no way [Josh's diddling] could come out," because it was a "sealed juvenile record." Michelle Duggar says, "we'd all resolved it, it had been forgiven, we'd moved on with life." Jesus forgave them! Let's do a TLC show!

Are the Duggars in trouble because everybody hates Jesus?

Of course! According to Jim Bob, this has been an "unprecedented attack" on their family, and the REAL STORY is that Josh Duggar's juvenile record was released.

Michelle says that her girls have "been victimized more by what has happened in these last couple weeks. And they weren't twelve years ago, because they honestly, they didn't even understand or know that anything had happened, until after the fact, when they were told about it." Josh Duggar didn't victimize his victims, THE LIBERAL MEDIA victimized his victims. Got it.

Speaking of those victims, we agree that it's heartbreaking the girls have had to relive all this. Two of them will be sitting down with Megyn Kelly in an interview, which will air this Friday night on Fox.