The Duggars Will Help You Steal A Baby In Five Days Or Less, Maybe 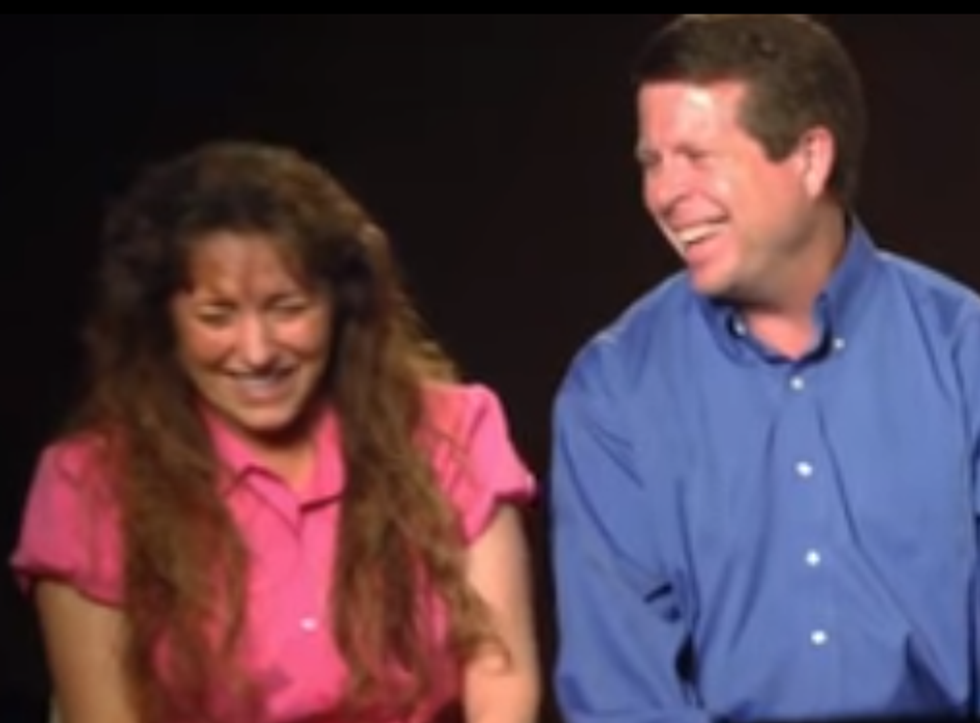 Are they giggling because they stealed a baby???

Doesn't it blow when you want a baby but you ain't got no baby, and they won't let you take home the first one you see at the baby store? That's when you have to get on your knees and say "Dear Jesus and also the thousands of Duggars who sitteth on His lap, obviously," and explain in your prayer that you want a baby, in Jesus's name, Amen.

That is apparently what happened, according to the Duggar Family Blog, for some couple named Todd and Donna McCoskey. They had an older child, but they ain't had no baby. Then the Duggars got involved and they had a baby within FIVE DAYS, according to a new documentary called "Here, Take One Of These Duggar-Squeaks, Mom And Dad Won't Notice." Just fooling, it is called "The 5 Day Adoption," and it's obviously very special:

Is it possible to carry out an adoption in less than one week? For Todd and Barbara McCoskey, stars in the new documentary The 5 Day Adoption, the answer is yes. Five days after prayerfully beginning the adoption process, the McCoskeys welcomed their newborn daughter Christina into their family.

A network of Christians around the country, including Jim Bob and Michelle Duggar, came alongside Todd and Barbara to make this adoption possible.

That's kind of lovely. Wait, no it isn't. It seems ... unsafe? inadvisable? downright fucking stupid? ... to make an adoption happen that fast.

Here, have a movie trailer, it's BALLS-OUT creepy:

Oh look who else is excited about this movie. It's the blond bigot Benham twins, those Christian supremacist dudes with fine asses who ain't got no TV show on HGTV, because they're Aryan gay-bashers (click to embiggen):

From CAT scans, FBI background checks, Home Studies, to making travel and other necessary arrangements – all in 48 hours – this family saturates all decisions with prayer and praise to God. As they obeyed, the Lord moved.

Hey, guess what ELSE you can "saturate in prayer?" Cancer, according to this book we found on Amazon called Dear God, Please Heal Mommy's Cancer, written by the very same Donna McCoskey, unless there's another Mrs. M, and she's into getting saturated on by the Lord too.

Anyway, so this couple saturated the Father, The Son and the Holy Ghost at the same time, and then He saturated them right back and also, too, the Duggars were at the foot of the bed mutually saturating each other (probably learned it at that sexxx camp they went to, where they rekindled their holy matrimonial fucking practices), and, presto chango, these people have a baby.

Of course, the quote above mentioned "a network of Christians" besides the Duggars, and this all happened in Arkansas where skeevy lady-voiced state Rep. Justin Harris (who goes to the same Cross Church where the Dug-Dugs go) "rehomed" his adoptive children with a rapist because they were supposedly possessed by the Devil. So you'll forgive us if we are JUST ASKING if all the kids in the Harris home are accounted for, or whether maybe the McCoskeys ended up with the latest Harris child what got infected with demons. (Or another child from a similar situation!) Because THAT shit could happen in five days, with virtually no paperwork. As always, please read Reuters's excellent series on "rehoming." It's pretty disgusting.

Maybe it is legit and we are just being mean, because we think the Duggars are pretty bad parents with a track record of forcing disgusting fundamentalist religion down their kids' throats and covering up their own firstborn son's sexual abuse of their own daughters. And also the thing about how anyone involved in the Duggars' particular network of homeschooling Christian fundamentalists is bound to be massively fucked up in some way or another.

Maybe it's fine and we are overreacting. Buy their moviefilm for the low price of $14.99, and maybe you will get all sticky saturated by God and the Duggars too, ew gross, goodbye.