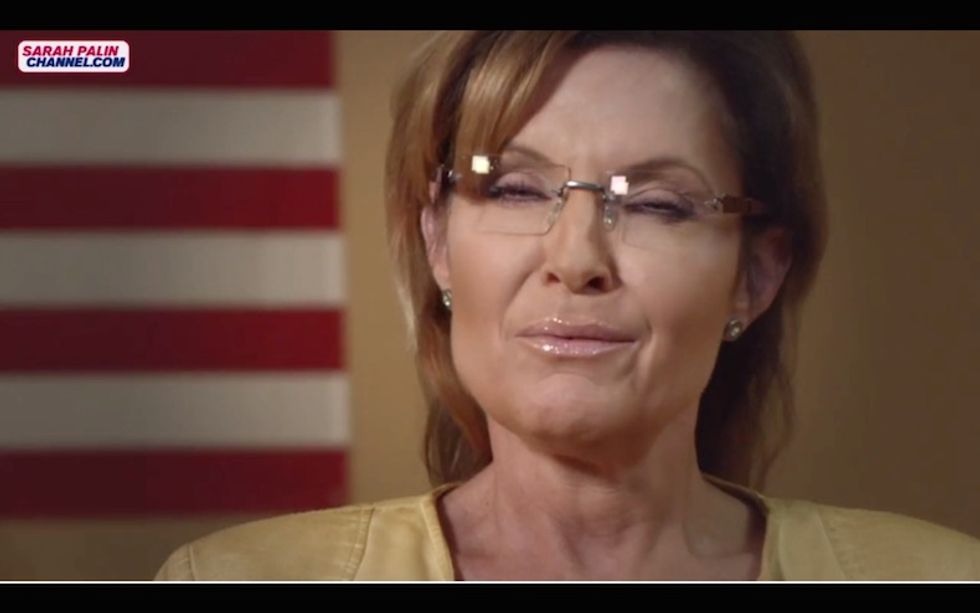 August 1 is quittin' time for the Sarah Palin Channel, so the gang up in Wasilla is scrambling to move existing inventory. We've got three videos for you this week, one on gun rights and scary home invasions, one featuring Ghost Thomas Jefferson, and one exercise in patriotic free-verse over what sounds to Yr Wonket like an old-school Casio synth track. It's a glorious day here at The Sarah Palin Fartknocker Report, Presented By Fartknocker, so let's dive in.

First up, Sarah would like to remind us that guns are good and good are guns. She will do this by recounting a story from 2010 and then both lying about the law and breaking the previous world record in the Long Jump to a Spurious Conclusion. The video is called "Criminalize Actual Crime, Not Gun Ownership," so you know we're off to a strong tautological start.

[The burglars] followed [the victim] to her room, and one man got out some duct tape when her dogs ran in, they started barking, it was all the distraction that she needed. Ahh! She shot one of the assailants, in the stomach, and the other two men, they ran away.

Here we pause to note that Palin describes the shooting of a man in the abdomen with an unsettling Szyslakian glee.

Here's the thing: the gun that she used is now illegal in New York because of its seventeen-round capacity. Had this happened in New York right now, this woman would be considered more of a criminal than the three guys who broke into her house! When you hear people talking about outlawing certain guns, remember that those restrictions put law-abiding people, the good guys like this brave woman, put them in danger.

[Jefferson] wrote his own epitaph, and he instructed that it would be etched, not a word more than what it is that he wrote, this is what it read: 'Author of the Declaration of American Independence, of the Statute of Virginia for Religious Freedom and the Father of the University of Virginia.' And that's it. No mention that he was, oh, I dunno, the President of the United States!

Jefferson described himself this way, he said, because these are the accomplishments that he wished to most be remembered. [sic; it's all sic, all the time] This is a perfect reminder of the way our founders viewed the office of the presidency. They believed that all elected officials, including the president, should play a limited role for a limited time in a very limited government.

Alexander Hamilton might wish to have a word with Ghost Mind Reader Sarah Palin about that "limited role for a limited time" thing. And if Jefferson and the rest of the founders wanted presidential term limits, they could have said so in the Constitution. Then again, the Fartknocker Report has already demonstrated that Palin will say anything to anybody regarding her position on term limits.

Also, Sally Hemings. Sorry, guys, it's basically a reflex at this point.

Sarah Palin Continues Her Post-Modern Exploration Of The English Language

Finally, Sarah Palin picks up where she left off last week, expanding the boundaries of her native tongue. She delivers searing free verse from the Land of the Midnight Sun, daring the haughty Outside literary elite to live a life as deep and full of meaning as Sarah Palin's own.

And I think about courage often, as our nation faces huge challenges, challenges like jihad abroad and cultural decay here at home and a political system that sometimes seems to just swallow up even the best of men and women. We are being tested, but I still believe that we have the courage necessary to save our nation from decline and from bankruptcy. After all, we're still a nation that produces such heroic characters and military, uh, heroes that you read about, and gosh, I wish we could read more about 'em. Heroes who face the most of  uh, the, the terrorist enemies comin' at 'em, and yet they prevailed. [...]

So long as our nation produces such men and women, I have hope, and I have hope when I see my fellow citizens taking risks to do things like start a business, and make a lot of sacrifices to raise kids, and help out families who maybe have kids with special needs and elderly parents and maybe illnesses in the families, neighbors helping neighbors, and just reaching to love and support friends in need. We have challenges, yes, but millions of Americans have courage, and courage will prevail.

Courage, men, courage. Colonel Wilberforce is in charge of the situation.