The Fartknocker Report: Sarah Palin Is Your New James Joyce Yes She Said Yes She Will Yes 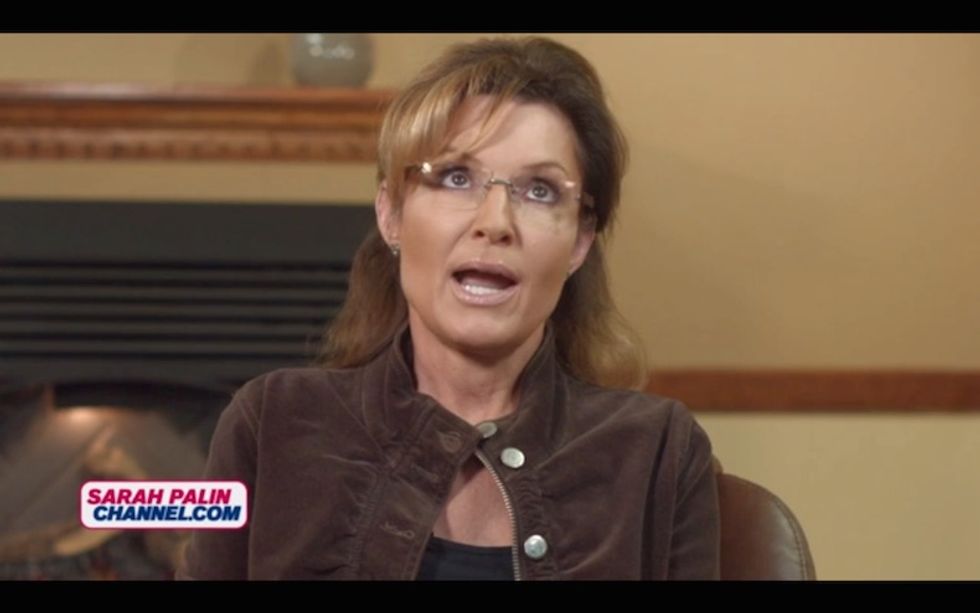 One video is about reforming the Veterans Administration, which makes sense when you consider the probable age of the typical Sarah Palin Channel subscriber. The most recent video, "Real Health Care Reform Vs. Obamacare," features the same fact-free assertions about Obamacare that Palin has maderepeatedly in the past. They are both tiresome and not worth embedding, with the second one featuring gems like this:

Oh, we warned people about this. Obamacare, it was supposed to help people get coverage, right? There will still be 31 million uninsured people by 2019. It's not helping. It's hurting.

Sarah could have avoided this factual error if she had read Yr Wonkette, but here we are, presuming that Palin isn't a willfully mendacious grifter whose sole purpose is to suck her subscribers' Social Security accounts dry. Silly us.

Instead, Sarah saved up this week's hardcore lies for a video that seems to carry water for Scott Walker's presidential campaign. As the incomparable Charlie Pierce has documented, the so-called "John Doe" investigations into Walker's campaign finance dealings highlight a new reality in today's politics, namely the winking and nodding between official campaigns and outside groups, who are legally prohibited from coordinating their activities but totally do anyway.

Echoing other voices on the right, Palin attempts to spin the Wisconsin "John Doe" investigations into a political witch hunt. She begins by showing us what James Joyce might have sounded like if he'd grown up in Wasilla:

Can armed police storm into your house and take away your laptop and walk into your bathroom while your kids are in the shower and go into your kids' rooms while you wake your kids and try to tell 'em, uh, just be calm and, uh, these guys, though, telling them don't breathe a word about any of this to your neighbors who wonder why your house is surrounded by cops, I know, that sounds surreal, sounds impossible.

Sarah Palin looked at this investigation and asked Scott Walker with her eyes to ask again yes and then he asked her would she yes to say yes his mountain flower and first she put her arms around him yes and drew him down to her so he could feel her [REDACTED BECAUSE JAMES JOYCE WAS A SMUTTY WEIRDO].

Well, they can do that for no other reason than the fact that you're a conservative or a libertarian or perhaps for whatever reason they come up with, it seems. In the state of Wisconsin, the answer to the question "Can they do that?" it's a resounding yes, and they'd rather that we all stop talking about that.

It goes on like that, with Palin reframing a campaign finance investigation into a bold defense of First and Fourth Amendment rights. But we'd like to direct your attention to the 1:17 mark, where the first line of a 2012 Milwaukee Journal-Sentinel article is briefly shown. Let's look at that article and see how it squares with Palin's narrative:

A new round of criminal charges is coming soon against at least a couple of Gov. Scott Walker's former county staffers for doing extensive campaign activity while on the taxpayers' dime, sources say. [...]

Already, the probe has led to multiple felony charges against Walker's onetime deputy chief of staff, Tim Russell, and former county veterans official Kevin Kavanaugh. They are accused of taking more than $60,000 in donations intended for Operation Freedom, an annual event at the county zoo for veterans and their families.

So does this mean that Palin's throwing her support behind Scott Walker in 2016? Maybe, we don't know, and God, we hope it doesn't matter. We have four more Fartknocker Reports left, and then we can return to mocking Sarah Palin only when she does something really stupid on Facebook.