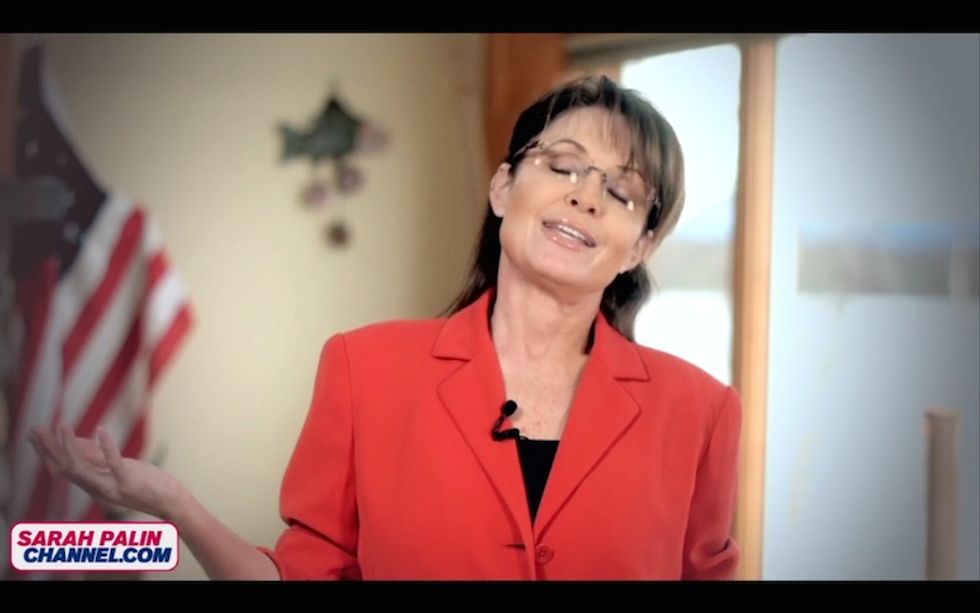 Yr Wonket has been covering the Sarah Palin Channel for the better part of a year now, and we have never, ever seen Palin say something this breathtakingly stupid. Hyperbole? Perhaps. But take a gander at this stupid, and have the number of your nearest burn unit on hand, because this is just searingly dumb:

Politicians like Darrell Issa, we presume. Also too, a former actor turned president whose anti-gun policies were a blatant affront to the Second Amendment. What was that guy's name again?

California has been suffering from a long-term drought; most people are aware of that. Governor Brown's answer, though, to that drought is to impose a 25% water reduction on California's cities and towns. His main target are [sic] those really nice landscapes and lawns on golf courses and campuses and cemeteries and private property, your yards! Well, as long as those, long showers that maybe you take. [sic]

A quick reminder: the Sarah Palin Channel does not broadcast live. She could have reshot this video and denied Yr Wonket an opportunity to drop two [sic]'s in that blockquote. But she didn't, because she has zero respect for her audience, which, come to think of it, is an attitude Palin shares with most members of Wonkette's vile little snark mob.

So let's talk about those lovely golf courses out there in Kommie-fornia! The city of Palm Desert is home to dozens of these clubs, and all of them are covered in grass. Palm Desert is, as you might imagine, a desert, and you do not need to be Carl Spackler to know that grasses native to Scotland and Bermuda do not thrive in California's Mediterranean climate unless you pump in metric shit-tons of water. Literal metric shit-tons of water, you guys.

Nearby Palm Springs is even worse. Home to 124 golf courses, the Palm Springs region receives about three inches of rain annually, and almost all of the water used to irrigate those 124 courses comes from other parts of the state. This is not a commie pinko talking point; those claims come straight from the head lobbyist of the Southern California Golf Association. And every drop of water that's used to jack up the stimpmeter at Palm Springs courses is a drop that cannot be used for drinking, bathing, or anything else in other parts of California.

Yr Wonket would not ask the first part of that question, actually, for the same reason that we would not arrive at a party that had run out of booze and suggest someone go pick up more empty bottles. Reservoirs do not come pre-filled. They are quite literally places that require you to "Just Add Water," water that California simply does not have.

Palin then goes on to explain that "the environmentalists" are against her plan to drink the sea just because desalination plants are unbelievably energy intensive, as if that's even a legitimate concern for a state that has been whipsawed by energy prices.

Then Palin says that these same environmentalists want to paint California's brown lawns green, which is not something Yr Wonket has ever heard before, but hey, that is why we watch this stupid fucking Internet teevee channel every week, is it not?

Lest you think that we are picking on Palin's weakest video this week, we remind you that Sarah Palin is all about grifting efficiency, and thus left us little choice. As of press time, Palin had published only one other video this week, and at 1:31 in run time, it is 45 seconds shorter than her deeply stupid ramblings about California's drought. The Sarah Palin Channel is the rare instance in which "she makes it look so effortless" should not be interpreted as a compliment.