The Fartknocker Report: Sarah Palin Might Have Driven Us Nuts 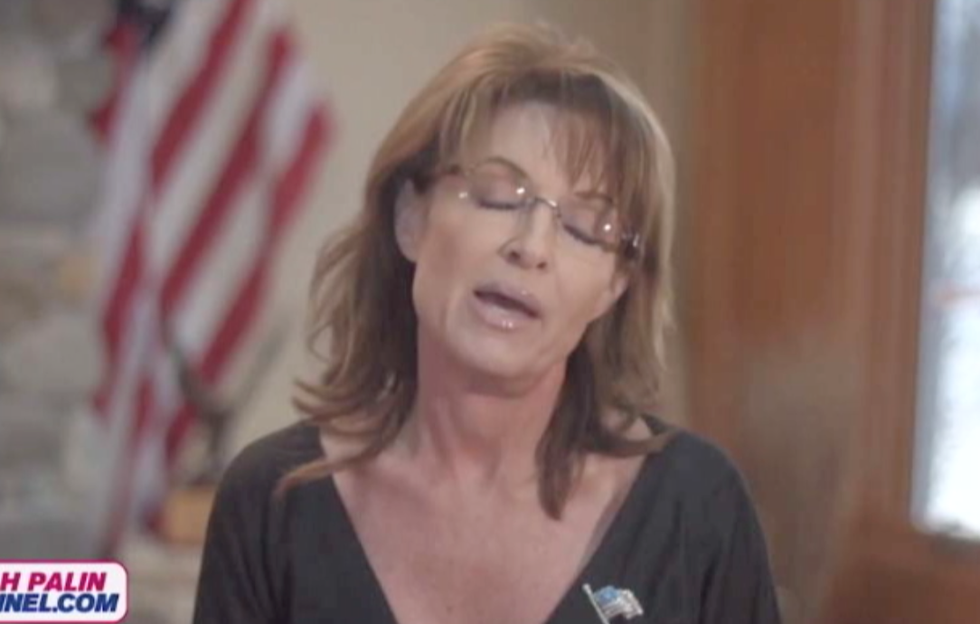 Fresh off a beating in the conservative press, Governor Quitterface might be expected to lie low. But no. Instead, she pumps out a post a day, a level of productivity we haven't seen in a while. And it's killing us.

Undeterred by her fiasco in Iowa, Palin presses ever forward, dumping word salad on the Internet's face forever and ever. And don't fool yourself, it's not like this is good word salad, either. It is word salad with olive pits in it, so when you bite down on it, you crack your molars. It is word salad made of cheese rinds and half-composted apple cores and things that have no business being in a properly constructed word salad at all. Things that could have only gotten there by dint of the salad maker's malice or apathy.

We cannot think of any reason beyond carelessness or hate for mistakes such as the following. Our first example appears about a third of the way into a screed about Sharyl Attkisson, the former CBS reporter who claims the Obama Administration attempted to hack her computer.

[...] Now Attkisson — good for her, she's suing the Obama Justice Department and accusing President Obama's administration of illegal [sic] watching her while she reported on his scandals. There are a bunch of 'em, right? From Benghazi to Fast and Furious to Obamacare, et cetera.

She misspeaks on "illegal" and she actually finishes a thought with "et cetera." If that's not reason to do a quick second take, Yr Wonket isn't sure what is. And yet Palin presses ever forward. She has to publish literally tens of minutes of ostensibly scripted footage this week, she has no time to reshoot. Her machine grinds onward, ever forward, toward a blood-soaked twilight and the dew-covered corpses of a dawn that will never break.

These tiny, bush-league production mistakes are littered throughout this week's screechfest. Hidden amid the boilerplate Tea Party howls, they dart out from behind cruel-faced rocks to attack Yr Wonket's ears, and they are driving us mad. Worse and more terrifying still are the instances in which there's a clear splicing of clips, a clear effort by the Sarah Palin Channel's editors to prevent a sentence from devolving into Palinese. There is an effort, and then there is a failing, and it is difficult to watch.

Look upon our video and know that we are not making this up, you guys. This example comes about halfway through a limp, three-minute revamp of Ted Cruz's late-2014 being wrong about the Internet.

The ability to express ourselves, it's one of the foundational principles of this nation. Reclassifying broadband as a telecommunications service would almost certainly threaten. [sic]

Well, as the President piles more taxes on all of us...

Palin is breaking us down, one tiny grammatical error at a time. There is no bottom to this pit of suffering. We curse you, Fartknocker. From hell's dark heart we stab at thee.