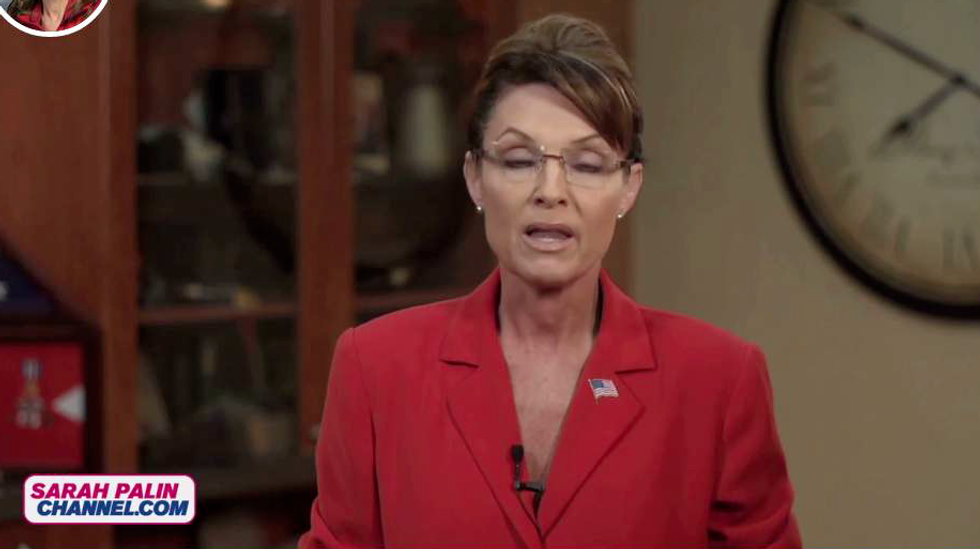 “I am. As I said yesterday, I’m really interested in the opportunity to serve at some point,” Palin said Friday, as former Pennsylvania senator Rick Santorum, a potential 2016 rival, looked on. [...]

This very same weekend, over on her EXCLUSIVE online teevee channel, Palin put on her red Presidentin' blazer to President-splain what is wrong with B. Hussein Nobummer's America — if you can even call this country America anymore, and Sarah Palin rather doubts that you can. Governor Quitterface took one look at McDonald's rebooted "I'm Lovin' It" campaign and decided that, well, that's it right there, isn't it? Everything that's wrong with Obama's America in a 60-second TV spot, because something something DEMOCRAT FAILED POLICIES.

Here's what Sarah Palin thinks the McDonald's ad should have said. Please keep in mind that this is ostensibly a scripted video.

The last screen of the McDonald's ad says 'Choose Lovin'.' Maybe it should add, 'Yeah, choose lovin', but c'mon, be smart, choose leaders that don't cripple the economy, won't penalize businesses, they can trust you, the business owner, and the worker, that you won't cause unemployment to keep skyrocketing to the degree that people can't afford Chicken McNuggets off that 99-cent menu.'

That is fucking glorious. Read that again. READ IT AGAIN, GODDAMMIT. Also, because we love you, we have mocked up Palin's new tagline. We think it's got some legs.

Yr Wonket sincerely hopes that this video is a febrile vision of the 2016 campaign. Just imagine Sarah Palin and Ted Cruz challenging Rick Santorum and Ben Carson to sign their One Take Only Pledge, restricting all campaign videos to a simple shoot-and-upload process — no city-fied star-wipes or other forms of Hollywood hijinx, just a fire hose of freedom from their mouths to our bleeding ears.

It would be incredible, you guys. Watch the full video here and imagine the possibilities.

We are truly witnessing the end of days.