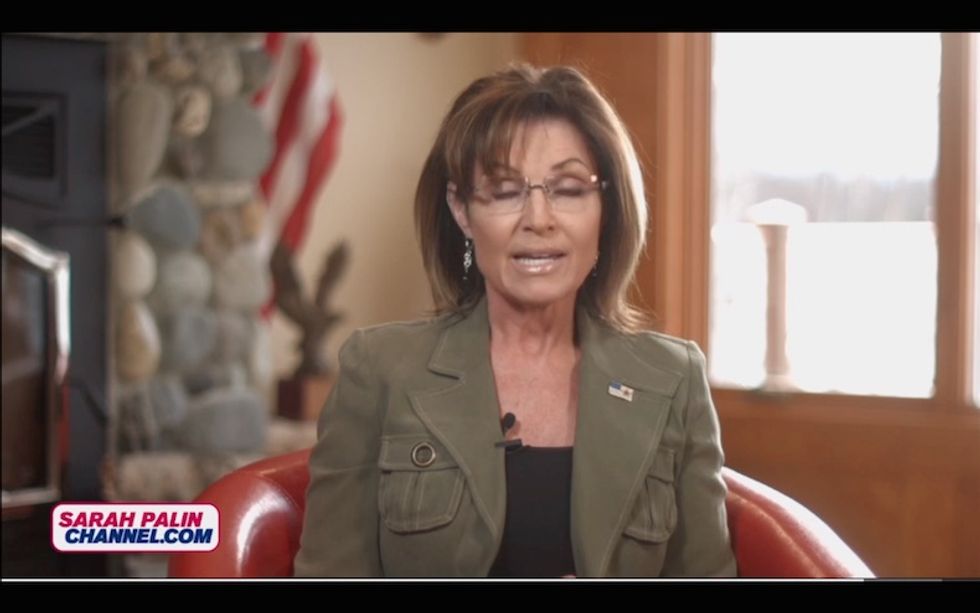 As even the paupers of the Wonketariat know, Andrew Jackson's face adorns the American $20 bill. That is, as they say in academia, "problematic," so Senator Jeanne Shaheen of New Hampshire has introduced a bill to replace Andrew Jackson's face with that of a woman. That doesn't sit so good with Sarah Palin, no sir.

Writing in the New York Times, author Roxane Gay suggested that Margaret Sanger should replace Jackson on the 20. Gay only wrote 360 words in favor of Sanger, but that was all the invitation Palin needed to pump out a two-minute hate for the rubes who continue to pay actual Andrew Jacksons for her Internet teevee channel.

[...] In fact, one feminist wrote in the New York Times that Margaret Sanger should replace Andrew Jackson on the $20 bill. Well, this must never happen. We should never admire someone whose life's work was built on racism and bigotry.

That says a lot about those who support Margaret Sanger, her beliefs, and this new drive to replace Jackson on the $20 bill with this racist.

To be fair (we keep telling you, we are nothing if not fair), Palin's complaint is that Sanger supported eugenics — an understandably sensitive subject for the mother of a special-needs child — and you know what? Sarah Palin is right!

[wakes up in puddle of own drool]

No, seriously, Palin is right about Sanger supporting eugenics. If it was, say, 1914 and you wanted to discuss the finer points of negroid musculature, Margaret Sanger was your lady! Presuming you had enough teacakes and laudanum on hand, you could get Sanger to talk for hours about mongoloid brain pans, forced sterilization of undesirables, and other fun topics.

Lots of people liked eugenics back then, including Winston Churchill, who has been featured on the Sarah Palin Channel's quote of the day eight times.

Yes, that's the same Winston Churchill who wrote that he was "strongly in favour of using poisoned gas against uncivilized tribes." (Apparently, Churchill's broad brow and pugnacious jawline are the kind of traits Palin looks for in her eugenicists.) But this week's Fartknocker Report, Presented by Fartknocker is not about a British racist — no, it is about one of our homegrown racists, one born and raised right here in U.S. America!

So let's discuss Andrew Jackson for a moment, because Yr Wonket has been waiting to write a hit piece on that long-dead sonuvabitch ever since high school history class.

Sarah Palin has vocally decried Barack Obama's tyranny, that his use of a "pen and phone" demonstrates his contempt for the balance of powers inherent in the Constitution. Let's go take a look at what Andrew Jackson had to say to a friend following the Supreme Court's decision in Worcester v. Georgia:

"... the decision of the Supreme Court has fell still born, and they find that they cannot coerce Georgia to yield to its mandate ..."

That's because the Constitution doesn't give coercive powers to the judiciary, as Jackson well knew; instead, it gives those powers to the executive branch, which Jackson headed at the time. In a move that would presage the post-war political strategies of small-government conservatives, Andrew Jackson argued that his own refusal to implement a Supreme Court order was proof that such an order could not be implemented. Fuck this guy.

Let's move on to Jackson's beloved home, the Hermitage, where he grew cotton using nothing more than grit, bootstraps, and the sweat of more than 100 slaves. Modern-day apologists for Jackson note that he introduced "manhood suffrage" into American politics, thus guaranteeing that all men could vote even if they did not own property. Of course, things were a little different if you actually were property — like so many other slave-owning fathers of this country, Jackson's high-minded principles stopped where his personal finances started. Fuck this guy.

How about the Trail of Tears, you guys? Sure, Andrew Jackson sent thousands of innocent people on a transcontinental death march, but he didn't really see them as people, so therefore let's keep this fucker's face on the 20, for freedom.

The Trail of Tears is undoubtedly the jewel in Jackson's genocidal crown, but he'd been genocidin' Injuns long before he cock-slapped the ghost of James Madison and acted like the king Sarah Palin claims Barack Obama is. Back in the War of 1812, Jackson ripped up a treaty signed by a superior officer so that he could force the harsher terms of the Treaty of Fort Jackson upon the Creek people. In the process, he confiscated tens of millions of acres of Native American-controlled land, including lands controlled by tribes that had sided with the young United States in that war. Seriously, fuck this guy.

We could go on (we have not even mentioned that time when Jackson left the nation without a central bank so he could win a personal and ideological pissing contest with a man who has become a footnote in history!), but what is the point? To recap: Sarah Palin believes that Margaret Sanger cannot be on the $20 bill because her "life's work was built on racism and bigotry." Andrew Jackson, on the other hand, was an American hero.

Poe's Law states that, absent an explicit declaration of the author's intent, it is impossible to definitively tell whether someone is a true-believing extremist or simply making fun of true-believing extremists. Sarah Palin's embrace of Andrew Jackson is a textbook example of this law in action, and Yr Wonket is beginning to wonder if Governor Quitterface isn't auditioning for our job.

Follow Dan on Twitter. He is indebted to Sister Jeanne Marie Vanderlinde, OSB for being the first person in his life to point out what a colossal asshole Andrew Jackson was.