The Fartknocker Report: Sarah Palin Will Not Pay Taxes On Soda, Not While ISIS Is Still Around 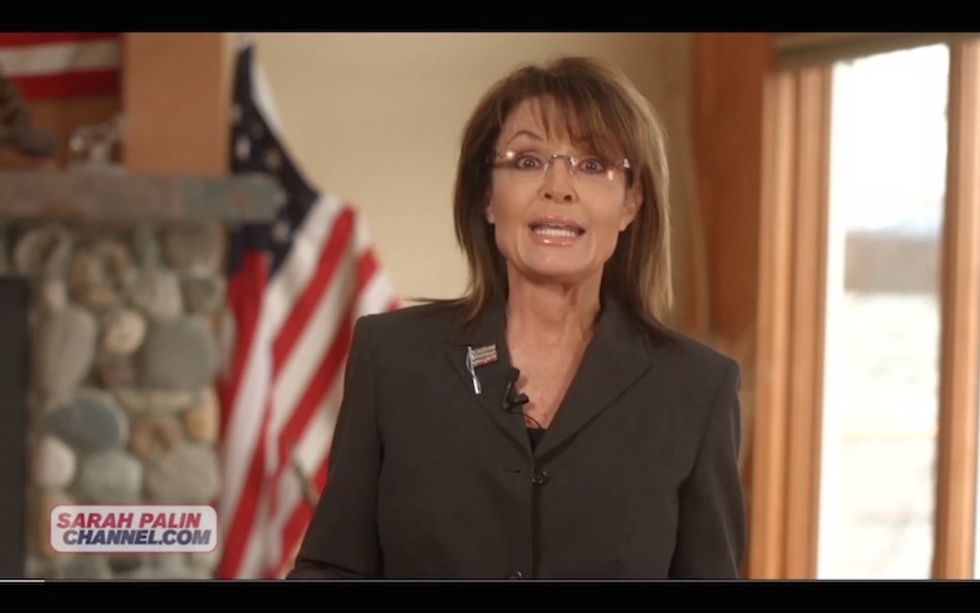 But rather than learning this Dummycrat about how taxes make all jobs die forever, Sarah Palin explains the real problem: that ISIS exists, and therefore the Connecticut General Assembly—and by extension Barack Obama, we suppose?—had better get its act together, goshdarnit.

This video is perfect, an eternal golden braid of derp, and we are going to blockquote it at length:

Get this, a Connecticut Democrat has proposed legislation to tax sugary drinks at one cent per teaspoon of sweeteners, like sugars! Theses types of taxes, they're designed to discourage certain behaviors, kinda mold the person into what some politician perceives as an ideal person, according to their own priorities.

Some taxes are indeed designed to place incentives—positive or negative—around certain behaviors. Like the way we give people free federal money just for forming babbies and popping them out of their belly buttons or however it works! By this standard, Sarah Palin has kinda molded herself into what some politician perceives as an ideal person at least five times.

Those are called 'sin taxes.' But wait a second: liberals are now all of a sudden interested in sin? Well how judgmental!

This is what political satire sounds like when you've inhaled too much methane from the melting permafrost.

During a time when Christians are being targeted and murdered by radical Islam, when the Obama administration still isn't serious about jihad, when our national debt is sky-high and growing every day, and when our borders are open and we're rewarding illegal aliens whose first act upon our soil is to break our laws—yeah our borders aren't secure—well, really, soda? That should be way down on the list of government concerns.

Rep. Candelaria's proposed sugar tax has been tabled and is currently awaiting a hearing in the Connecticut House Committee on Finance, Revenue, and Bonding. That's a pretty good indication that a tax on sugary sodas is indeed "way down on the list of government concerns," but Yr Wonket is confident that Sarah Palin's subscribers have Trusted But Verified this fact-flavored nugget from Governor Quitterface. Besides, mentioning the disposition of Rep. Candelaria's bill would take the piss out of this whole post, and what is Palin going to do, spend another three minutes shooting a different video?

Then Palin goes into the history books, which you brainwashed progressives probably haven't even read.

Prohibition didn't work well the first time around, did it? Shoot, if people want sugar, like me? We're gonna get it!

An outstanding historical comparison from "Lou Sarah," because prohibition was nothing more than a one-cent tax on alcohol. You really do learn stuff from watching her Internet teevee channel.

Hey Democrats, why don't you stop your moral preening and actually work to fix some things that are wrong in our nation?

In last week's Fartknocker Report, Presented By Fartknocker, we wondered if Palin was sincere or just trolling. This week, we believe we have our answer.