The Fartknocker Report: Sarah Palin Will Sue Obama For Stealing The Internet 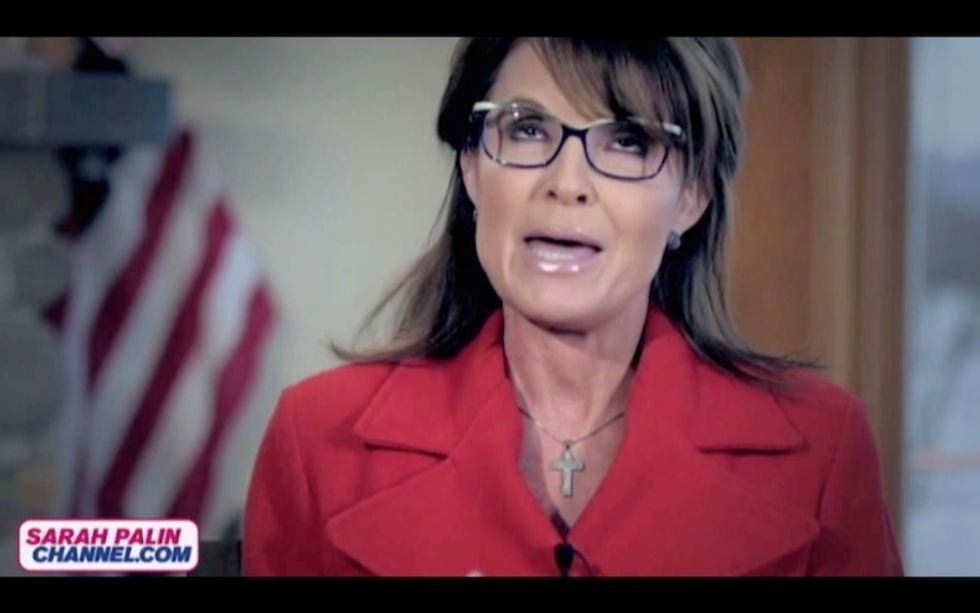 The real story of this week's Fartknocker Report (Presented By Fartknocker) is about Sarah Palin being super lazy all the way to the bank. We'll get to that in a minute. But first, let's watch a video in which Governor Quitterface boldly takes up the late Sen. Ted Stevens's mantle as Some Alaskan Person Who Doesn't Understand The Internet.

I just don't see the benefits of [net neutrality] at all, lemme know if you know of the benefits of government taking control of the Internet. Gimme your feedback on this, because I must be missin' something.

You are indeed missin' something, Sister Sarah, you are indeed! Thus far, none of the Sarah Palin Channel's commenters have told her what net neutrality is or what it does, but we'll let you know if that changes. (It will not change.)

Confident in her own ignorance, Palin presses forward to seek justice for America's beleaguered telecom companies.

Thankfully, Americans aren't taking this lying down. Now, legal challenges to these, uh, FCC power grab, they're already beginning. The Obama Administration, man, they always seem to be telling Americans that democracy doesn't matter. The administration, this president, he's imperial, he can do what he wants. And Americans continue to respond the same way we have to all the other Obama Administration attempts to restrict our liberty.

Our response, especially with this one is, eh, Mr. President, see ya in court.

Does this mean that Palin will be filing an amicus brief when the telecommunications lobby launches its anticipated lawsuit? God, we hope so. Because otherwise, we don't even know what she means by "see ya in court." Maybe she's going to just show up at the courthouse with a toy gavel and just yell, "Order in the court, order in the court!" until someone pays attention, who knows.

Our favorite part of the video is what Google says in response to Palin's typed query, "what the internet needs is more regulation." Check it out, and tell us with a straight face that the Sarah Palin Channel doesn't record its videos on a one-take-only basis.

The first search result is from Comcast corporate. The third search result is a story that explicitly answers the question Palin poses less than 90 seconds later. Those are some remarkably lazy production values, but they pale in comparison to another video Palin published this week.

Twenty percent of the Sarah Palin Channel's content this week comes from "Mama Grizzlies," a four-year-old PAC video that is exactly as dumb as it sounds. Worse, the Sarah Palin Channel already republished this PAC video in its entirety on July 27, 2014. It's part of the channel's "Sarah's Greatest Hits" series — a series of exactly three videos, two of which are "Mama Grizzlies."

Say it with me, Wonketeers: efficiency. Grifting efficiency. Publishing an old PAC video incurs no marginal costs for the Sarah Palin Channel, and we cannot even hate on this strategy because it appears to be working. Look at some of the comments on the reposted "Mama Grizzlies" video. These appear to be satisfied subscribers.

It's a glorious time to be alive.