The Female Body Has Ways To Shut That Whole 'Rep. Trent Franks' Thing Down 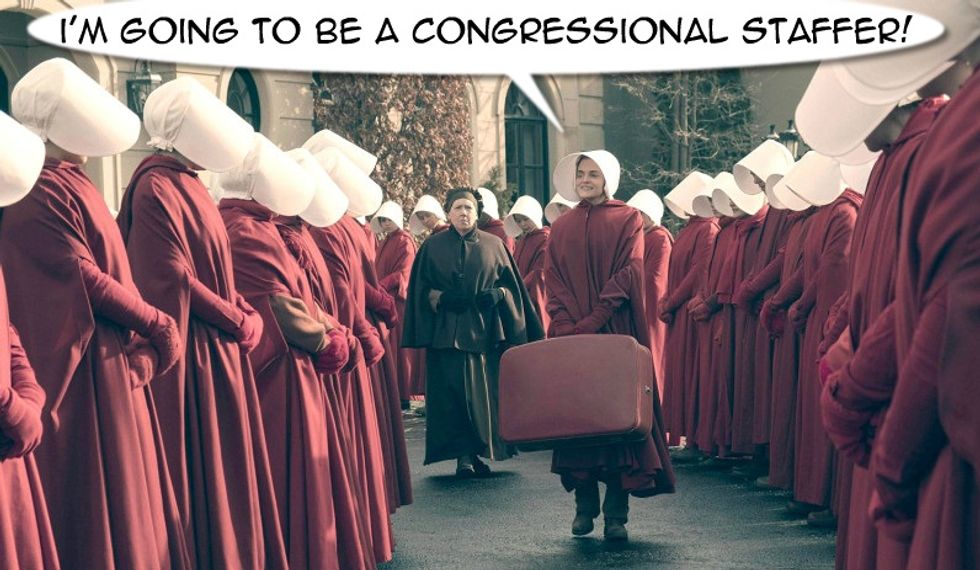 Always check the fine print in the ads

Arizona Congressman Trent Franks, one of the most prolific "pro-lifers" in the US House, announced last night that he would resign from Congress because he's under investigation by the House Ethics committee into what the committee termed conduct “that constitutes sexual harassment and/or retaliation for opposing sexual harassment" -- but which Franks said was about his "discussion of surrogacy with two previous female subordinates, making each feel uncomfortable.” You know how that can be -- you spend a lot of time in the office talking about finding an appropriate rent-a-womb for your baby batter, and some ladies just don't see that you're merely thinking out loud about how your wife's insides are a rocky place where your seed could find no purchase. Franks originally said he would leave Congress at the end of January, but announced this afternoon that he was leaving effective today:

"Last night, my wife was admitted to the hospital in Washington, DC due to an ongoing ailment," he said in a statement Friday. "After discussing options with my family, we came to the conclusion that the best thing for our family now would be for me to tender my previous resignation effective today, December 8, 2017."

In a story just published by Politico, we learn what's up here: Exactly what we expected. Franks wasn't just discussing surrogacy with the staffers, he had actually asked them to be his brood mares, and then fired one staffer for saying "ew, NO." (We assume that's what she said.) It turns out that Politico reporters asking Franks for comment on their story seems to be the reason for speeding up his departure.

The sources said Franks approached two female staffers about acting as a potential surrogate for him and his wife, who has struggled with fertility issues for years. But the aides were concerned that Franks was asking to have sexual relations with them. It was not clear to the women whether he was asking about impregnating the women through sexual intercourse or in vitro fertilization. Franks opposes abortion rights as well as procedures that discard embryos.

A former staffer also alleged that Franks tried to persuade a female aide that they were in love by having her read an article that described how a person knows they’re in love with someone, the sources said. One woman believed she was the subject of retribution after rebuffing Franks. While she enjoyed access to the congressman before the incident, that access was revoked afterward, she told Republican leaders.

"How a person knows they're in love with someone"? Was the "article" the lyrics to THIS?

Franks denied the allegations, of course.

All that certainly gives a new spin to what's certainly among the stranger resignation announcements in recent Congressional history. Franks started off by making one thing absolutely clear: Nobody saw anything nasty in his woodshed.

I have absolutely never physically intimidated, coerced, or had, or attempted to have, any sexual contact with any member of my congressional staff.

Rather, he explained, he and his wife had a long history of problems making babies, and she'd suffered three miscarriages, and they'd also had no luck adopting because they kept picking pregnant gals who decided to keep their babies, presumably after telling their Papas not to preach. Eventually, they found succor:

A wonderful and loving lady, to whom we will be forever grateful, acted as a gestational surrogate for our twins and was able to carry them successfully to live birth. The process by which they were conceived was a pro-life approach that did not discard or throw away any embryos.

Thanks to Politico's reporting, we're now pretty confident that particular "natural" method of surrogacy involved P-in-V instead of IVF or a t.u.r.k.e.y. b.a.s.t.e.r.

But once the twin boy and girl were three, the Frankses wanted to try again for another pro-life angel baby, "for which our children had made repeated requests," and how can you turn them down when they ask so cute? Turns out that's when this ethics complaint came about, and he figures maybe he just over-shared in the office, as it were:

Due to my familiarity and experience with the process of surrogacy, I clearly became insensitive as to how the discussion of such an intensely personal topic might affect others.

I have recently learned that the Ethics Committee is reviewing an inquiry regarding my discussion of surrogacy with two previous female subordinates, making each feel uncomfortable. I deeply regret that my discussion of this option and process in the workplace caused distress.

Seems gals just don't react well to a boss ranging around the office, praying tearfully and crying "Who will bear my seed? Who, Lord? What woman will be a fitting vessel for the life with which I shall glorify You?" Also, we hear the staffers weren't willing to be renamed "Oftrent."

Franks said last night he was resigning to cut short the ethics investigation, "before distorted and sensationalized versions of this story would put me, my family, my staff, and my noble colleagues in the House of Representatives through hyperbolized public excoriation."

Too late for that, Captain Horatio Spermblower.

Not surprisingly, even before the Politico story broke, Some Said there was more to Franks resigning than the surrogacy story, as if it weren't a perfectly cromulent cover for a premature withdrawal, so to speak, from public life. TPM's Josh Marshall isn't buying it:

The sudden decision to get the hell out of Dodge immediately should certainly put an end to such ugly speculation. Yr Wonkette wishes Mrs. Franks a speedy recovery, and hopes nothing but the best for her. And now Yr Doktor Zoom is just the teensiest bit sad that he's going on vacation next week and will have to sit back and watch other Wonkers write about the incredible details. Maybe something to do with Russian adoptions?

Where the hell would Franks get $5 million? Selling fetal parts, duh!

Here's the AP story The Good Parts of this Indecent Proposal read thusly:

A former aide to Republican Rep. Trent Franks has told The Associated Press the congressman repeatedly pressed her to carry his child, at one point offering her $5 million to act as a surrogate [...]

The former staffer said the congressman asked at least four times if she’d be willing to act as a surrogate in exchange for money.

The AP says it has verified the staffer's identity; the staffer wants her name withheld, not surprisingly, which means some asshole like Mike Cernovich will have it on Twitter within the next half hour. Then Jim Hoft will find a different person with the same name and publish their Facebook picture.

Are you a good Wonker who sends us money by Amazon? Well not anymore you’re not, because Amazon done fucked our payment system. Would you be so great as to re-sign with Paypal or Stripe? Yeah, that'd be great, OK?