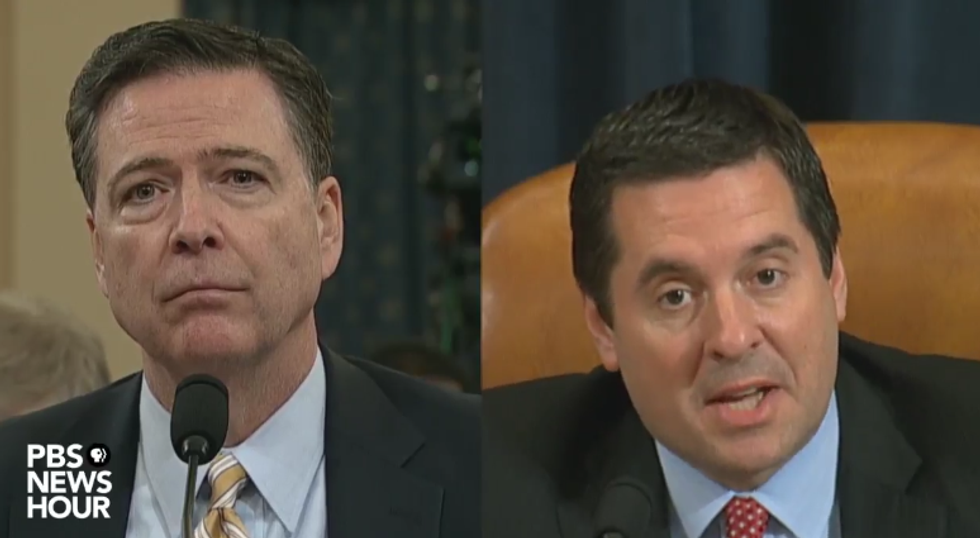 real smart guy there on the right

Did everyone have a good First Hearing On Trump's Russia Connections on Monday? It was just great! We learned ... things! James Comey said ... not much! The Trump White House didn't seem very happy! One of our favorite parts, though, and one of our main takeaways, is that the Trump-supporting Rep. Devin Nunes, chairman of the House Intelligence Committee, is A IDIOT. Like, we already knew he was a remarkably stupid man -- to support Trump that fervently you kinda have to be -- but in Monday's hearing, he was useless. Compare his performance to how Rep. Trey Gowdy did chairing the Benghazi committee. Oh sure, Gowdy is an obnoxious yokel, and he sounds like Foghorn Leghorn's simple-minded poolboy, but at least he showed up. Devin Nunes did not. Hell, he hardly talked, and when he did, it was an inane seven seconds of your life you will never get back.

Let us show you, with the handy help of the Washington Post's transcript of the hearing:

The time he grunt-begged for a Hillary investigation

If this committee or anyone else for that matter, someone from the public, comes with information to you about the Hillary Clinton campaign or their associates or someone from the Clinton Foundation, will you add that to your investigation? They have ties to Russian intelligence services, Russian agents, would that be something of interest to you?

Do you think it's possible that the Russians would not be trying to infiltrate Hillary Clinton's campaign, get information on Hillary Clinton and try to get to people that are around that campaign or the Clinton Foundation?

When he said "Clinton Foundation," a flash of excitement crossed his eyes, because the weirdest things get wingnuts hard. At that point, Comey just tried to back away slowly.

I just hope that if -- if information does surface about the other campaigns, not even just Hillary Clinton's but any other campaigns, that you would take that serious also if the Russians were trying to infiltrate those campaigns around them.

Devin Nunes are unable to words as good as you think he am.

That time he thought he did a GOTCHA! by asking whether Russians always support Republicans in America, like AS IF, BRO.

Follow along with the transcript as Nunes appears to be under the impression he is forming a clever thought, and asking questions like a REAL investigator:

Mr. Comey and Mr. Rogers, you both said that the Russians had -- they favored Donald Trump, the selection. And you made that change, from the beginning of December it was not that they were trying to help Donald Trump, but that changed by early January. Mr. Conaway talked about that. Do -- do Russians... [...] do Russians historically prefer Republicans to win over Democrats?

NAILED IT. Because if Comey says they don't always like Republicans, maybe we can ... GO AFTER HITLERY?

NUNES: Did the Russians prefer Mitt Romney over Barack Obama in 2012?

ROGERS: I don't know that we ever did -- drew a formal analytic conclusion.

NUNES: Did the Russians prefer John McCain in 2008 over Barack Obama?

NUNES: Don't you think it's ridiculous to say that -- for anyone to say that the Russians prefer Republicans over Democrats?

ROGERS: I didn't think that that's what you just heard us say, I apologize, sir.

COMEY: I hope you didn't hear us to say that. We don't know in those particular races and I'm not qualified enough...

Awwwwww yeah, he's closing on on his big reveal, which is that it's UNLOGICAL to say the Russians preferred Trump, if they have never preferred Republicans every other time in the world!

NUNES: I'm just asking a general question. Wouldn't it be a little preposterous to say that historically, going back to Ronald Reagan and all that we know about maybe who the Russians would prefer, that somehow the Russians prefer Republicans over Democrats?

James Comey responded with the magic word "classified," which, in this case, meant "STFU little boy, the grown-ups are having a hearing."

The NSA and FBI tell Congress that Russia did not influence electoral process. pic.twitter.com/d9HqkxYBt5

NUNES: So my question as of today, Admiral Rogers, do you have any evidence that Russia cyber actors changed vote tallies in the state of Michigan?

NUNES: How about the state of Pennsylvania?

NUNES: The state of Wisconsin?

NUNES: The state of North Carolina?

NUNES: The state of Ohio?

THEN WHY ARE WE EVEN HERE? Now, to be fair to Nunes, he seemed to be trying to follow orders from Donald Trump, whose White House tweeted this exchange as proof that Russia didn't affect our electoral process AT ALL, a lie Comey had to debunk in real time later in the hearing.

The time Nunes thought everybody should shut up about the Trump campaign watering down the GOP platform on Ukraine, because shut up, they made it MEANER TO RUSSIA!

Fuck the transcript, just trust us that your memory is not failing you, and the Trump campaign definitely watered down the platform to appease their Russian BFFs.

The time Nunes tried to get Kellyanne Conway implicated in the Russia probe, because COME ON YOU GUYS, THAT'S SILLY.

NUNES: I just want to make sure we get this on the record. Do you have any evidence that any current Trump White House or administration official coordinated with the Russian intelligence services?

COMEY: Not a question I can answer.

NUNES: I figured you were going to say that, but I just wanted to make sure we got it on the record. How about counselor to the president, Kellyanne Conway?

COMEY: It's the same answer. And as I said earlier, I constantly want to ask people, don't over interpret the fact that I say I can't comment. I'm not going to comment on anybody.

DID JAMES COMEY NOT JUST SAY "STFU LITTLE BOY"? Nunes replied that he understands, but he is sad because this has put a big "gray cloud" over everybody in the Trump White House, which is unfair, because shouldn't they be able to ruin the country in peace without Russian gray clouds making them sad? The gray clouds are making Devin Nunes sad.

In summary and in conclusion ...

Move over, Louie Gohmert and Jason Chaffetz and all the rest, there's a new Stupidest Republican In Congress!

Holy mother of god, what a MORAN.

Wonkette is fully reader-funded. If you liked this post, fund us, with some dollars!