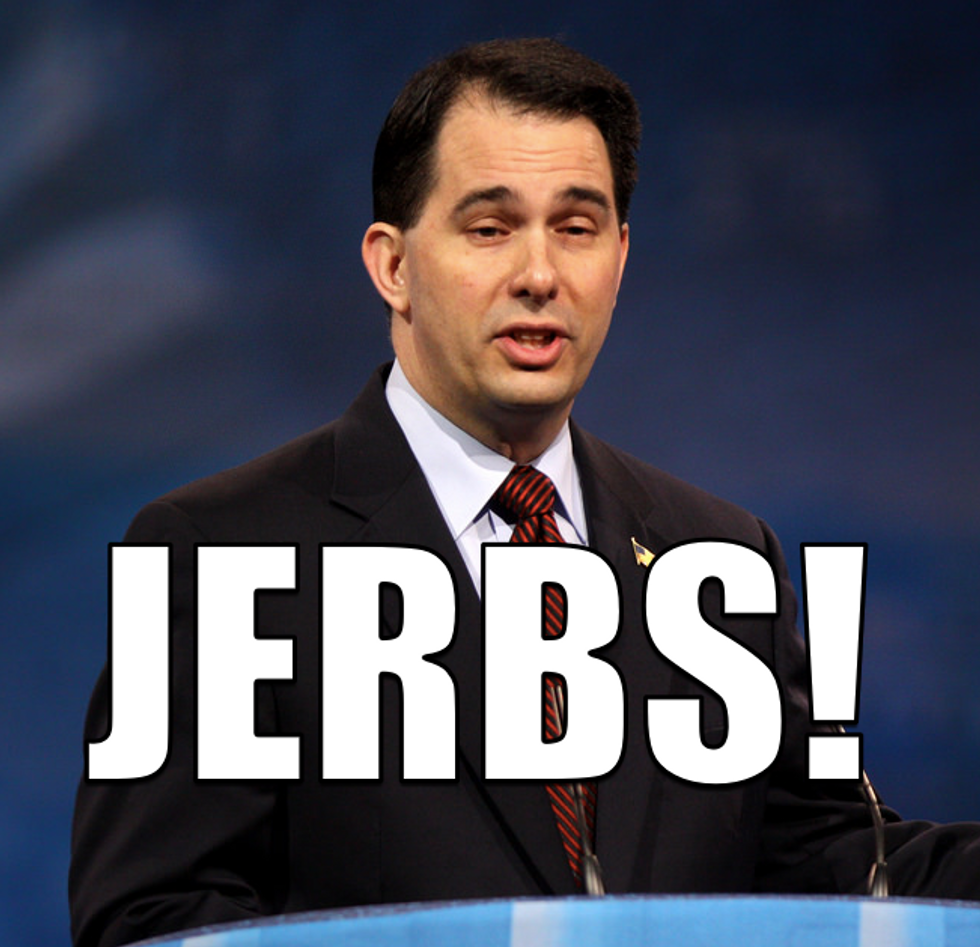 What if a Taiwanese manufacturer came to you with an offer to bring 3,000 jobs to your state. Sure it's a company best known for running sweatshops in China where they have to put anti-suicide barriers on the roof because the workers keep jumping to protest horrible working conditions and low wages! But these will be good jobs, paying an average of $54,000 each. And all you have to do is give them somewhere between $270,000 and $1 million in subsidies per job. WHAT A DEAL!!!

Which is how Donald Trump wound up on stage Wednesday with Scott Walker and Paul Ryan announcing construction of a yuuuuge new Foxconn factory in Kenosha, Wisconsin. Ten thousand construction workers will build Foxconn's ginormous new LCD screen plant. Paul Ryan's district will get 13,000 new jobs -- or maybe just 3,000. Same difference! And Scott Walker is a hero who will now sail to re-election in 2018. Hooray!

Or, maybe the state will pony up billions of dollars in tax subsidies and find itself with nothing to show for it. That would be less good.

Tim Culpan of Bloomberg Business has been criticizing the boondoggle for months, and published a withering takedown. His spoof letter from Foxconn's president Terry Gou to Donald Trump is hilarious, and also...informative. Read it!

I am a doer, Mr. Trump. I get things done. When Apple told me to start making iPhones in Brazil to get around import tariffs, I made it happen. It didn't create much employment, mind you, because I just exported pre-fabricated iPhones for the locals to slot together -- kind of like Lego -- but it got the job done. And by job, I mean kept Apple's and Brazil's leaders happy. And who do you think paid for it? Not me.

If you want iPhones to be made in America, I can make that happen, too. Heck, I can set up a production line in Trump Towers if you like, but the costs will be yuuuge. I have to cover my expenses, which include factories, labor and transport. You see, I don't manufacture in China just because it's cheaper, but because thousands of suppliers are there, within spitting distance of my factories and the one million people I employ during peak season.

It's funny 'cause it's true!

In keeping with his signature megalomaniac style, Trump got the ball rolling by taking credit for inventing the sphere.

“I would see Terry, and I would say ‘Terry, you have to give us one of these massive places you do great work with,’ ” Trump said Wednesday...

“If I didn’t get elected, he definitely would not be spending $10 billion,” Trump said. “We are going to have some very, very magnificent decades.”

Color us skeptical on anything cooked up by Trump, Walker and Ryan. In fact, to find their plan remotely credible, you have to accept Four Magical Bullshit Premises. But once you've swallowed that, it's all delicious! So eat up!

Magical Bullshit Premise #1: This factory is actually going to be built!

Foxconn's president, Terry Gou, has promised to build a 20 million square foot factory in Kenosha. That's the size of 347 football fields, or three times the size of the Pentagon.

Terry Gou has agreed to kick up $10 billion for construction. Which seems like a lot, until you remember he's theoretically building a 20 million square foot factory. Besides which, Foxconn has only spent about $9.5 billion on construction in the past five years, and it has already committed to spend an additional $17 billion for construction in India and China. But sure, Scott Walker! They're definitely going to pony up to build that "Wiscon Valley"!

Okay, they welched on agreements to build factories in Pennsylvania and Indonesia. But this time they really mean it! Youbetcha!

Magical Bullshit Premise #2: Foxconn will employ 13,000 people when the factory gets up and running!

Foxconn's Gou is reported to be modeling the plant on Elon Musk's Tesla facility in California, which has 160 high-tech robots doing much of the work. As Tim Culpan observed in Bloomberg yesterday,

There is potential for the payroll to climb to 13,000 in the future -- a figure crucial to Wisconsin justifying the expense -- but I wouldn't bet your 401(k) on it. That's because if Gou really does dish out $10 billion on this facility, the only way to make it viable is by keeping staffing low and leaning on automation to boost productivity. This LCD factory will be either labor intensive or highly automated. It can't be both.

Back in January, Gou told the Nikkei Asian Review that Apple was going to partner with him on a North American plant to make LCD screens. Apple has never confirmed this. But let's just play along for a second here, and pretend that this giant plant will staff up to capacity and start producing 90,000 sheets of LCD glass per month. As Culpan reported in January, Foxconn's monthly production would yield "72 million iPhone 7 Plus screens, or more than 868 million annually." Apple sold about 210 million iPhones in all of 2016, so unless Apple is getting back into the teevee business, they could never possibly absorb Foxconn's output.

Wisconsin is now claiming the factory will be making glass for big screen televisions and large commercial displays. Too bad those millennials watch everything on their Obamaphones and demand for television panels was down almost 4% last year!

Magical Bullshit Premise #4: Foxconn will be making products for export!

They're giant sheets of the thinnest glass! They don't ship! Stop with this foolishness!

If we were a betting man, we'd wager that this thing will quietly fade away just like the Harrisburg, Pennsylvania, plant did. It will be "in the planning stages" through Scott Walker's 2018 campaign, and then ... nothing. But don't worry, Badgers! State subsidies are tied to production, so Wisconsin will probably only be out a few hundred million by then.

Wonkette is watching the wankers. FOR YOU! Please give us a tip!