The Idiot's Guide To Gun Storage 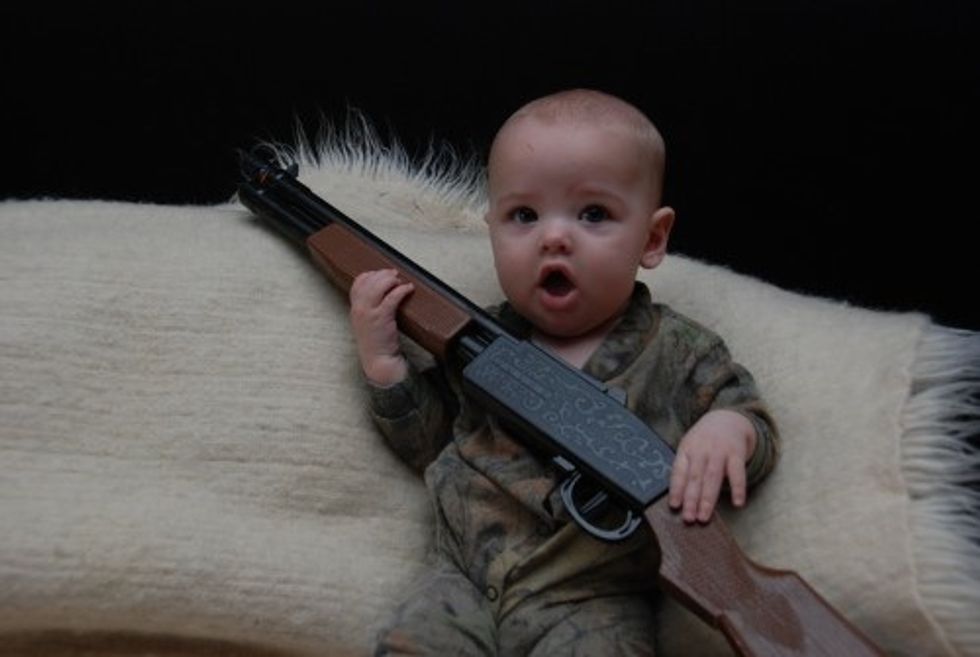 Hey Wonkette, didn’t we just talk about Idiots With Guns being Idiots With Guns? Yes we did! But since this is America and small children seemingly have greater access to guns than to decent early childhood education, we had ample opportunity to up the depressing for today's installment.

In Missouri, a five-year old found his grandfather’s gun on a shelf built into a bed  located in the same room as the crib for the boy’s nine-month-old brother. In the least Feng Shui bedroom layout possible, apparently the adults couldn't foresee that one of the four young boys in the house might be slightly curious. This is terrible and sad and now the baby boy is dead. No charges have been filed.

In Florida, a two-year old is dead after finding a gun in the family car’s glove compartment. Tragically, he shot himself instead of one of his idiot parents and died from the self-inflicted wound.  Luckily for the parents, the county sheriff won’t inconvenience them with any charges.

The sheriff said the parents won't face criminal charges — no one could punish them more than they'll punish themselves, he said.

No, that’s actually incorrect, Johnny Law. YOU could punish them for leaving their child alone in a car and within a foot of a loaded weapon. In fact, FLA. STAT. § 790.174 and § 784.05 are the money statutes about a "child accessing a carelessly stored gun" that you're looking for.  But since we don't want to punish "usually lawful" gun owners, and the deterrent value of criminal prosecution is mysteriously absent for negligent gun people, the parents are free to move on with their lives. After all, they’re not terrible guardians like this Florida mother who is facing felony charges for brazenly letting her son walk to the park by himself. That’s legitimate endangerment. Who knows? He could’ve stumbled upon a loaded gun and hurt himself.

Unlike Florida, who we (surprisingly) can not totally criticize on this issue, 23 states have no statutes specifically attributing criminal liability to a gun-owning patriot who negligently allows a child access to his 2nd Amendment Remedy Firesticks. Another 14 states will only bring charges if the gun owner intentionally, knowingly, or recklessly gives a gun to a child.

In other words, you can literally misplace your 9mm pistol in the waistband of your one-year-old’s diaper (please don’t!), and most jurisdictions in this country won’t bring criminal child neglect or endangerment charges. Which is exactly what the founders intended.

Repress your rage tears as we detour to airport security lines. Last year, 2,212 guns were discovered in the carry-on bags of American airport travelers. This is a record and a 22 percent increase from 2013. USA!  The leader was Dallas/Fort Worth Airport, which confiscated 110 firearms.

This is one I just don’t get. Are the gun toters just concerned about flying with all the Islamofascists (or Sikhs, whatever), and possibly crazed hippies who were able to sneak their demon weed onto the plane in their contact lenses cases?  Do they feel unsafe leaving home to go anywhere without Ol' Shiny Loretta? Or is everyone flying to Mogadishu and no one told us?

Finally, in Richland Township, Pennsylvania, there was a cleanup on Aisle Dipshit after a gun fell out of 59-year old Gerry Good’s fanny pack at a local grocery store. It discharged and wounded 2 fellow shoppers who were treated at the scene.

It’s not, in fact, always the ones you least expect. Sometimes it really is the yokel with the fanny pack. No details on whether his drivers license or coupons were harmed. Good, who really isn't, is now facing charges.