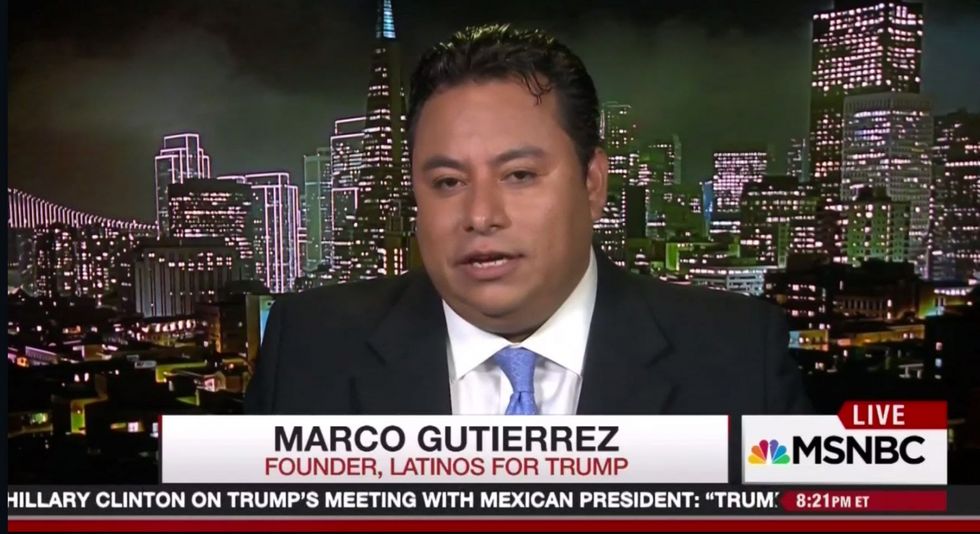 He hates things that are delicious.

Last week, Hillary Clinton -- through no effort of her own -- pretty much sealed the election for President of the United States, when Trump supporter Marco Gutierrez of Latinos for Trump promised us all that were she elected, there would be taco trucks on every corner. This was a proposition that sounded bad to exactly no one, because tacos are delicious and having them be easily accessible is a dream come true. I know, because I am living that dream:

We could fit a few more in, frankly.

I can guarantee you that my quality of life is significantly higher living in this taco-rich environment than it was when I actually had to drive to get tacos, like some kind of sucker. Hell, I could even Grubhub tacos from like 10 places right now, and it is only 10:30 in the morning here in Chicago. If that is not living the dream, I do not know what else is.

Anyway, aside from being wrong about what the American people want in terms of food -- which I think we can all agree is literally never having to go more than a block in order to procure a delicious taco -- Marco Gutierrez is also a real estate scammer who scams poor people hoping to save their houses, and then steals their money and uses it to pay his cable and phone bills! NICE!

Behold, his LinkedIn Profile, filled with many things one would consider a red flag were this a Tinder profile!

OH. He's a visionary, an ~autodidact~ and an entrepreneur? So amazing that he can be so many definitely tangible things at once! I bet you that he also loves to laugh, and that he works hard and plays harder. Also, he is the VP of Operations at THE AMERICAN DREAM HOUSING AGENCY CORP! Which is pretty interesting, considering that I have looked and looked and have not yet found a single other employee of this company, and upon googling, only came across his name in relation to it. Swipe left!

However, he vision-boards and entrepreneurs much further than simply a super shady sounding LinkedIn profile! Crooks and Liars reports that he has been in lots and lots of trouble. HERA, a non-profit housing and economic rights advocacy program, describes Gutierrez as a serial scammer. This is from their 2013-2014 annual report:

Abuses leveled at immigrants can be particularly vicious. As part of a foreclosure rescue scam, Marco Gutierrez bullied and intimidated HERA’s monolingual Spanish-Speaking homeowner client, charging over $16,000 for a loan modification. He took the homeowner’s car as partial payment but never changed registration, racking up unpaid tickets under the homeowner’s name. When HERA helped the homeowner complain to authorities, the scammer filed a meritless lawsuit against the homeowner (and against a HERA staffer). In the course of defending the case, HERA discovered that Gutierrez was a serial litigant who had filed dozens of actions against his “clients”. Gutierrez was using the court system to bully vulnerable residents across several counties into paying amounts they did not owe him and to retaliate against those who complained about his practices. After defeating Gutierrez’s claims HERA brought a successful vexatious litigant motion against Gutierrez. As a result, both HERA’s client and countless other unrepresented homeowners who might have fallen prey to Gutierrez’s tactics are now protected.

OOH! What a charmer! He has also been in trouble with the California Department of Real Estate, which wanted to revoke his license in 2011 for taking money from a homeowner under the guise of helping them keep their home, and then taking money from said homeowner's checking account to pay his own Comcast and Sprint bills. As you can imagine, he did not actually help them save their home.

Although the department didn't succeed in doing this, they did ban him and his wife from doing any dealings with individual homeowners. Though I am not sure why he's not actually in jail for doing this in the first place, because how is that even legal?

Also, much like his hero Donald Trump, Gutierrez is a serial bankruptcy filer! He's filed for bankruptcy at least 14 times (that is a LOT of times!) and does so in an extremely shady way. According to a former friend and potential creditor, this is how they do it:

During the time I was working with [Debtors] they explained to me how they were using the bankruptcy court to prevent foreclosure on their home and to prevent other collection efforts, since they had no money. Mrs. Gutierrez explained to us that the way they were preventing a foreclosure was by filing for bankruptcy and then not following up on a legal requirement and the case would be dismissed. She explained to us that sometimes there was a three month period between the filing and the dismissal and that interfered with the foreclosure.

That doesn't seem like it is the way things are supposed to work?

Anyway, with a background like this, it is hardly surprising that Gutierrez is one of the very, very few Latino people willing to come out in favor of Donald Trump. It's not like he's got much of a rep to protect anyway.

In conclusion, this guy is wrong about everything, kind of a jerk, and there should definitely be taco trucks on every corner.