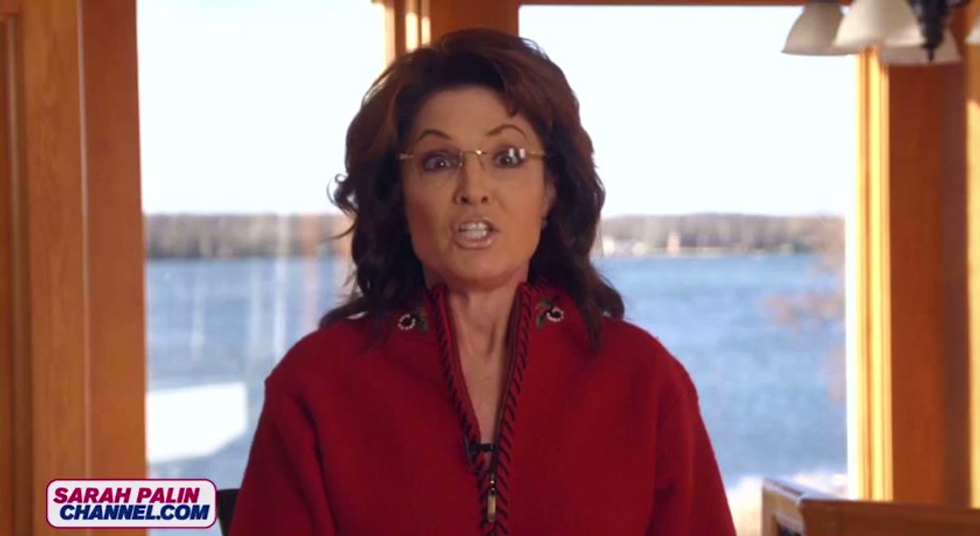 Sarah Palin is a busy former half-term governor these days. She's hit the campaign trail for Republicans no one really likes; she "wrote" a Facespace note telling us how she had a big sad about the Thrilla in Wasilla; and four days ago, she went foraging for derp berries in the Fever Swamps of Poor Historical Analogies. You guys, look what she found!

There's no convincing scientific evidence for manmade climate change. The climate has always been changing. Climate change is to this century what eugenics was to the last century. It's hysteria, and a lot of it's junk science. And when it's as discredited as eugenics, y'know a lot of people are going to look foolish and heartless.

LET US STOP YOU RIGHT THERE, FRIEND. We will give you that the Nazis were "heartless," but "foolish" is going a bit light on the ol' Holocaust there, dontcha think?

Why heartless? Because this global warming, climate change hysteria hurts the poorest among us. We hear all the time about how liberals care supposedly more for the poor than conservatives do.

Back up the snow machine, Governor. Earlier in this clip, you told us you'd seen the melting Alaskan glaciers for yourself. In what way is it appropriate to compare those glaciers with, say, forced sterilization?

But for the sake of climate change, the liberals hold back the poorest parts of the world from the kind of development that we have in America, where roads, bridges, schools, hospitals, and yes, cars and trucks have helped give all of us longer, more prosperous, healthier lives.

It's a good point, liberals. The worst part about poor foreigners and their poor foreign shantytowns is that they don't burn enough dirty fossil fuels. Prove Sarah wrong, you can't, it's a fact, look it up.

Here's the whole clip if you'd like to waste a few minutes of the precious gift of life.

Devotees of the wingnut right may remember this glib equivalence between global warming and eugenics from previous episodes, like articles from this guy, and some other jerk, and Alex Jones' Sept. 18, 2004, Infowars entry about it, which will open all of your sheeple eyes if you haven't already drunk too much Kool-Aid, or something, God it's all so tiresome...