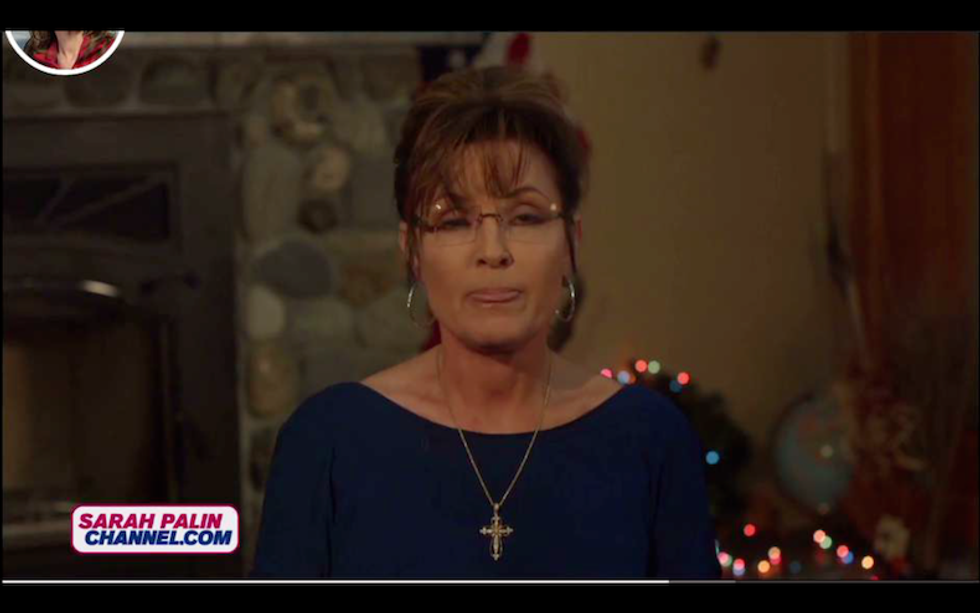 After a content-heavy end to the year, the Sarah Palin Channel has regressed to the mean. She's posted three videos in the last seven days, one of which was designed as a complement to her Faceplace screed on DogGate. And if we're being perfectly honest with ourselves, Palin's video about Jill Hadassah (yes, that is the dog's actual name) is really cute and does exactly what it's intended to do. Beware, Wonketeers, for Sarah Palin is improving in her ability to grift across multiple media channels, and she's doing it with a widdle puppy with a cute widdle puppy face.

Look at that adorable puppy. Oh our god, who's the cutest little puppy whut is trained to help special needs children, yes you are, Jill Hadassah, yes you are! Sarah Palin is going to conquer America using the Buzzfeed playbook, GIRD YR LOINS, PROGRESSIVE SCUM!

Okay, enough of that. We know that you come to bury Sarah Palin, not to praise her heart-meltingly cute puppeh. We know you're here for Palin's scalding hot takes on pressing issues of state, and say, do you think a post titled "Obama's Enemy-Centric Foreign Policy" might do the trick? We bet it will, and it had better, because Palin really didn't post much else this week.

Why oh why do liberals believe that weakness makes us safe?

Thaaaaaaaat's it, Governor Quitterface, just like that. Play the hits for us.

Let's talk about Russia. [...] Russia is going to start patrolling the Gulf of Mexico with long-range bombers. Tell me: what is there for Russia to patrol in waters that are so close to our home?

We'll stop Palin right there, because that's the money shot. In less than one minute, she has deftly demonstrated her channel's inability to report news in a timely fashion along with her own ignorance of both long-standing American military policy and the history of Cold-War saber rattling. Let's Wonksplain!

First off, if "going to start patrolling" means "Russia announced this two full months ago," then Palin is correct. Thanks for staying on top of the news for us, Sarah! Your 60-day lag time helps us understand what life must have been like for the first Alaska pioneers.

Secondly, the reason Russia wants to send bombers into the Gulf of Mexico is the same reason why American bombers have been based in Turkey and Japan for decades. Saber rattling doesn't work if it's not credible (don't tell the KCNA), and since Putin's regime was built on chest-puffing and oil revenues, he's had to step up the chest-puffing as oil prices have dropped.

Finally, Russia decided to buzz the American coast with Tu-95's, lumbering Cold War relics whose propellers break the sound barrier while the plane as a whole does not. Russia has sent much more advanced strike aircraft up to the edge of Norwegian and Swedish airspace, but heaven forfend that Palin educate her readers on the Russian navy's recent incursions into Swedish waters, or how American spy planes have violated Swedish air space as part of this deeply stupid game of cat-and-mouse.

None of those "facts" are important, because those stories are about someplace other than U.S. America and are thus, by definition, irrelevant to Sarah Palin's subscribers. The point here, in case you libs hadn't noticed, is that Barack Obama's the worst president ever, 'NUFF SAID.

If the Cold War taught us anything, it's that overreactions to perceived fears always work out well for everyone involved. Yr Wonket thanks Sarah Palin for reminding us of this lesson.