The Snake Oil Bulletin: Creationist Aliens Want To Exorcise The Witchcraft From Your 'Puter 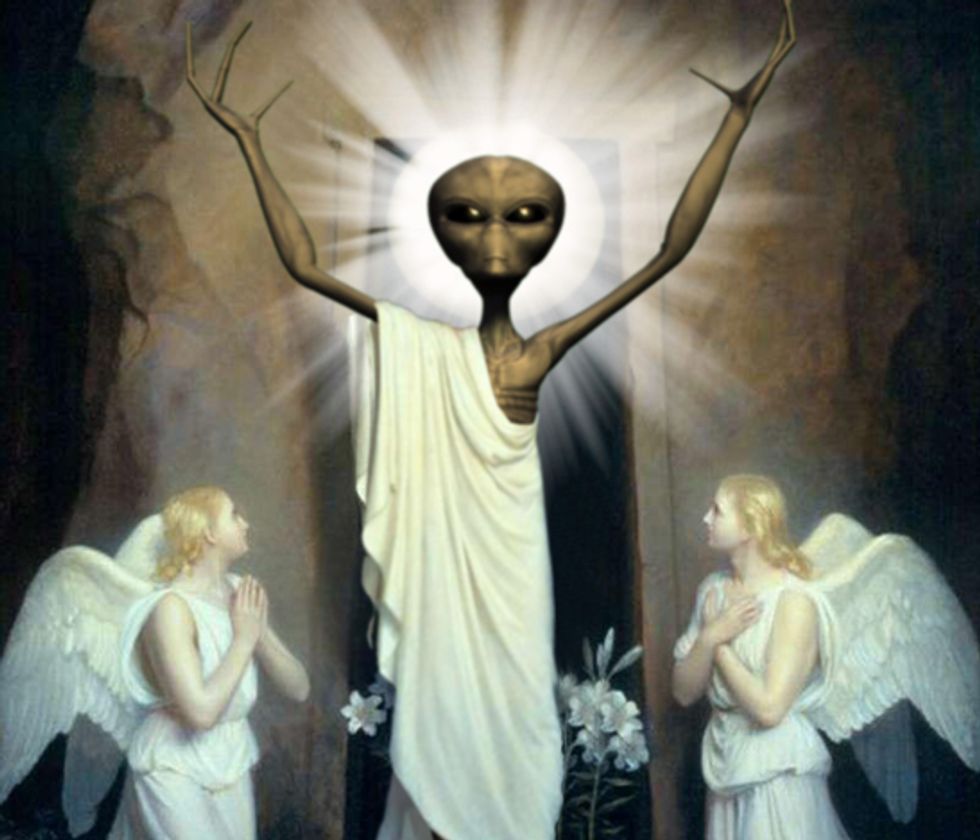 Welcome back, saints and sinners alike! It's time once again for the Snake Oil Bulletin! Are your souls in need of spiritual cleansing from our old friend Alien Jesus? Are you ready to hear the truth of God's word as revealed through the voice of a carnival barker? Are you prepared for the majesty that is a pointy-hatted witch praying over a computer to get the viruses out?

Just say yes, because it's not like we can actually hear you. Let's dive right into the woo.

Ladies and gentlemen, have you missed Ken Ham, the worst Australian export since Mel Gibson? Of course you haven't, but I'm sure you've missed laughing at his ongoingfoibles at getting the state of Kentucky to pay for his totally-not-a-church Noah's Ark theme park. But Ken's hit upon a surefire way to scam him some filthy Whore of Babylon bucks from the gubmint: steal it from those poindexters at NASA. What are they even doing with all that money anyway? Oh, "searching for aliens"? Pfft, like that's even a thing.

In a new blog posted to Answers in Genesis, Ken Ham beats his old reliable drum that NASA is just frittering away that tender, succulent money on boondoggles like increasing our understanding of the universe through scientific exploration. Excuse me? We already have all our answers in God's Holy Word, and we should never question it ever. If the Bible says pi is 3 then pi is 3, Lord dammit!

Ken has come down against NASA's quest for alien life before. But whereas in ages past Ken at least tried to seem like he was making a cogent argument unbiased by the visible greed lurking behind his beady little pig eyes, this time he minces no words and immediately launches into a plug for his Ark Encounter park in the second paragraph:

The first thing that I predict will happen is that all those non-Christians (and even some Christians) who claim Answers in Genesis should be using the money for the poor when I post articles on our life-size Noah’s Ark construction project will now be making the same comments on all these news sources reporting this—and of course they will also be contacting Stephen Hawking and Yuri Milner to make the same comment. Well . . . maybe that prediction is doomed to failure as I find it’s really the message of the Ark most critics are objecting to—not the money being spent on it! I encourage you to read a list of common questions or criticisms we hear about the Ark project and the answers to them.

Oh har har, Ken, you suh-LAY us. Kinda like how God slew all those babbies and lil childrens when he called down the rains to murder every living creature on the planet save for eight grown adults and a boatload of animals. By the way, is your family-friendly park going to feature the children's book version of the story where God saved two of every animal, or are you going to actually read your Bible and depict all the sets of seven animals Noah brought along specifically to sacrifice in blood offerings to his all-loving God? Just wanted to clear that up. For Jesus.

Ham continues his gimme gimme parade with a reminder that not only can you waste your money on his quagmire of a theme park, you can also waste it at his money-hemorrhaging Creation Science Museum:

Secondly, sometime next month, for the small amount of $7.95 per ticket, you will be able to watch our new spectacular Creation Museum Planetarium program, Aliens: Fact or Fiction? at the Creation Museum, which will address the question of aliens and UFOs in an entertaining way. So for $7.95, you can find the obvious answer that $100 million is being wasted on—all because those involved in this fruitless search for aliens reject the account of origins given to us by the God who created the universe.

All the answers to the universe for only $7.95! It's like Ken is offering the Big Mac version of science. Who can beat a deal like that?

But what is this about a planetarium presentation? The Creation Museum has a planetarium? We're kind of amazed the Museum doesn't have a big sign on the ceiling that just says stars are holes poked in the firmament covering the flat earth. Oh goodie, there's a video and everything:

Thanks for that rundown, gentleman who probably gets upset seeing women with tattoos, but a little critique. You note in your video that "When we go to scripture, we don't really find any direct mentions of extraterrestrial aliens." Uh, have you read your Old Testament? Because if it's anything like the loons on YouTube tell us it is, then these "Nephilim" beaming down from heaven and breeding with human women are exactly what you're looking for. Also, why are you completely undercutting your entire presentation, Danny? You told your audience the answer before they even saw the show, ya silly billy. Why would they want any of your Sky Cake now that they know it isn't real?  Did Ken teach you nothing in Scamming 101? Tsk tsk. You'll never get to waste your own 100 million dollars this way.

We wish Ken all the luck in his endeavors, though as Ken himself admits at the end of his blog, he doesn't need luck, he just needs your prayers. And by "prayers" he means a link to his donation page. Keep fucking that chicken, Kenny.

Is your computer running slow? Is it shutting down, blue screening, and generally acting just a mess? Can it literally not even some days? If you were one of those mindless sheep out in the flyovers, you might think your computer has a virus or something old-fashioned like that. But that kind of thinking is so Mars-energy, and it's going to disrupt your chakras long-term.

Thankfully the programming nerds out in Silicon Valley have figured out the real reason for your computer's repeated crashes and mishaps. Is it all the internet porn you downloaded from perfectly well-meaning cheating moms who want to get laid in [YOUR CITY] tonight? Is it shoddy shovelware pushed out onto a consumer market by a profit-driven corporate monolith more concerned with bottom lines than creating quality parts? Fuck no, it's bad goddamn juju, man. Thankfully some of the biggest names in the tech industry have pinpointed the answer to these problems, and they're paying local witches top dollar to come down to their corporate headquarters to light candles over their desktops. It's just a shame they can't do this through Etsy anymore.

Spiritualism in San Fran has never been a new thing. While lots of teevee shows have poked fun at the idea that many company higher-ups are just aging hippies who happened to stumble into a suit and tie by accident, it seems that employees and CEOs of real actual computer firms are soliciting the services of psychics to help them debug their products and set trajectory for their businesses, as seen in this anecdote featuring Reverend Joey Talley, a Wiccan priestess who specializes in house exorcisms and computer errors:

Despite lacking a background in computer science or IT, Talley is occasionally called on to perform cyber security miracles....

"Most people want me to protect their computers from viruses and hacks," she says, "so I'll make charms for them. I like to use flora."

Jet, a black gemstone energy-blocker, is ideal for debugging office hardware, Talley says; bigger or more vulnerable computer networks often require "a rainbow of colors to divert excess energy." If all else fails, she can cast a protection spell on the entire company, office supplies included.

We're not entirely sure how no one has jumped onto this "debug your computer with pretty rocks and flowers" gig before because it makes TOTAL SENSE. Like religion before it, computers are big, scary, confusing monstrosities on which our lives are completely dependent. No one really gets how they work, and the answer to most tech problem seems to boil down to "Did you try turning it off and on? That didn't work? ...Well, fuck." It only makes sense that someone would jump on by claiming a "spiritual" component to these electronic machines when we've been claiming a spiritual component to the meat machines we call our bodies for millennia. How do you cure rheumatism? Get your humours in balanced. How do you fix a system 32 error? Banish the Clippy demons back to the depths of hell with some wolfsbane. It wasn't too long ago that internet pranksters were spreading the meme around Facebook that a good trick to "naturally" clear your computer of viruses was to stick a slice of red onion into the CD drive. Maybe somebody took the joke seriously?

Talley's foray into tech is still fresh enough that she sometimes calls it the "techno industry." That hasn't dissuaded savvy clients in the market for spiritual counseling, hypnosis, dream therapy, moon rituals, house clearings, potion-brewing, and other niche services. Her speciality? "I really like dealing with demons," she says.

She recounts a recent episode involving a startup whose office alarm was infected by an "invasive species." After multiple electricians failed to rout whatever poltergeist was causing the alarm to shrill at odd intervals, the company contacted Reverend Talley.

"I don't know anything about electronics, but I got the spirit out," she says. It's hard to tell whether she's boasting or apologizing.

"I don't know anything about electronics" is the phrase to look for when you're hiring someone to fix your electronics. And it doesn't just stop there. Bay Area companies still retain psychics on staff when it comes to dealing with legal problems, which might be why their legal problems just seem to get worse.

If it's surprising that companies should entrust critical office maintenance to a witch, it's nearly breathtaking that they also retain her for legal counsel. Talley says that when companies are threatened with litigation, she can cast spells to "divert" (one of her pet words) the plaintiff or the plaintiff's attorney. It's all child's play for her, no more taxing than donning the floppy hats that announce her professional uniform.

We don't have time to dip into the entirety of the the SF Weekly article because Dear Mother Goddess is it long and exhaustive. However, we highly recommend you read the whole damn thing because you'll come away with some of the most brilliant pieces of self-delusion ever put in print, like this charmer from a tech astrologer named Sally Faubion: "I call myself the Dr. Phil of numerology because I'm so incredibly honest and forthright."

Honey, by that metric Dr. Phil himself isn't even the Dr. Phil of psychiatry. Next time aim your sights a little higher, like the Dr. Oz of bullshit.