The Snake Oil Bulletin: Give Us All Your Moneys, Psychic Jesus Needs A Butt Injection 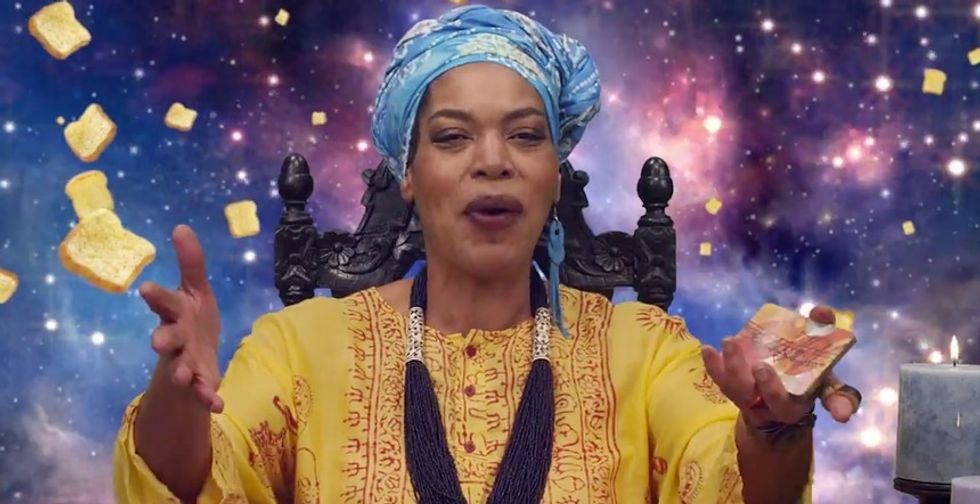 Welcome back to the Snake Oil Bulletin, your weekly compendium of swindlers, frauds, and con artists, all of them here for YOU, dear readers, with the divine guidance to help you through all the traps and pitfalls that El Diablo can throw your way. Side effects may include lightened wallets, overdraft notices, and some nasty junk in that trunk. So tuck in, pull out your credit cards, and get ready for the best that $3.99 a minute can offer! Let's get started.

Church lady figures out best line to scam friend: "It's God's Will"

First on our agenda, we have a case just begging for some divine intervention: a Pennsylvania woman has been arrested after scamming a fellow church parishioner out of close to $300,000 by claiming that visions from GOD ALMIGHTY told her to do it. Funny, usually people don't get those visions until after they found their own Christian teevee network.

Judith Ann Irvin is a resident of Turtle Creek, PA, and a member of the Greater Works Church. She met and befriended fellow church goer Kathy Sanford, an elderly victim of a post-concussion injury that left her with an addled mind and poor judgment. Right around this same time, Irvin began to have financial trouble and realized that her new friend was the perfect savior for her troubles.

COMPLETELY BY COINCIDENCE, Irvin began to have prophetic visions in her sleep, visions which told her that Kathy Sanford was chosen by God Himself to save the lost unwashed masses of the world from destitution. And wouldn't you know it? The Lord Almighty wanted her to start with Judy Irvin because why not? Who are you to question God? Exactly.

Over the span of several years, Irvin convinced Sanford to pay her rent, utilities, and car repair bills. Then, just like Jesus feeding the masses with only five loaves and a couple of Phish albums, Irvin realized what would truly help the poor of the world: some Louis Vuitton bags and a diamond ring! Gotta accessorize for salvation.

All in all, Irvin conned Sanford out of $281,928. We're honestly amazed she didn't escalate to a $65 million dollar jet, which by the way Creflo Dollar is totally getting now because the Devil can't stop him. Victory for Jesus all around!

In a related story of an emotional vampire leeching off a prime piece of victim, we have the case of Pricilla Delmaro. Delmaro, who went by Cristina Alvarez, was arrested Tuesday for scamming a distraught Brooklyn man out of over $700,000 in a classic case of New York one-upsmanship.

Delmaro first met her victim when he was having troubles with his girlfriend, and told him that their relationship was haunted by evil spirits. But when the victim's girlfriend suddenly died, Delmaro saw dollar signs a-poppin'. She immediately swooped in and convinced the man that his lover had been killed by the same evil spirits that had tormented their relationship, and that the only way to keep the spirits at bay was to pay her in jewelry. Mr. Babadook hates when he goes to Jared.

"Alvarez" convinced her distraught patsy that not only would the demons continue to torment him if he didn't pay her mega dollars for cleansing rituals, but that the demons would kill his other loved ones too if he didn't pay up, because fucking hell this woman is awful. What makes this story especially sad is that her victim was so traumatized by his girlfriend's death and subsequent financial abuse by this human leech that he didn't even realize he was being scammed until he hired private investigator Bob Nygaard to prove it. Nygaard knew "Alvarez's" husband, Bobby Evans, from a previous case of swindling down in Florida, but by the time he came to his client with the information, the couple had booked it with $713,975 in the bag.

Yet in perhaps a beautiful piece of poetic justice, Delmaro and Evans were eventually tracked down by police because the pair were dumb enough to order a luxurious dinner not far away at a 6th Avenue steakhouse, we like to imagine surrounded by piles of money and sporting brand new monocles to boot. Police charged Delmaro and Evans with second degree grand larceny and held them on $250,000 bail. Here's to the happy couple: You really have to admire them for being the absolute worst humanity has to offer. Mazel tov!

Take a seat, because last on our round-up of scam artists from down below, we have a weirdass story that is getting all the more common on the back-end of internet news. A New York "doctor" is being hunted down by police after she administered a hot silicone injection directly into her patient's butt, upon which the victim suddenly began choking and eventually died. We would ask you to contain your laughter because this story is just that shitty.

Kelly Mayhew was a Maryland woman who wanted to give her already bangin' curves a little boost, so she booked an appointment for a disturbingly common procedure in this, the Age of Beyoncé and Kim, Our Ladies of Perpetual Booty. She and her mother drove up to NYC to meet with a woman claiming to be a board-certified doctor, though perhaps their first sign things weren't on the up-and-up was that the woman asked them to meet her in a basement in Queens. You can find some wicked Broadway after-parties in a basement in Queens, but few doctors' offices.

Mayhew's mother reports that almost immediately after the quack injected her daughter's butt with a hypodermic full of what she claimed was silicone, Kelly began to choke and gurgle. When her mother begged the doctor for help, the con artist packed up her things and dashed out of the basement, leaving Mayhew's mom to call the EMT herself and try to give her dying daughter CPR until they arrived. Mayhew was pronounced dead at the hospital not long after.

Police are still hunting for Mayhew's killer, but her story is a weirdly uncommon one. Pumping parties are becoming the new Botox parties (oh yeah, those are still a thing too, so don't think you're better than this crap, white people), wherein a group of ladies get together with some raggedy quack who shoves God only knows what kind of junk into their butts to give them a lumpier appearance. But as Huffpo reports, more and more women are actually dying from this shit, because that's what happens when someone injects your body with super glue, tire-inflator, and rubber cement.

People, look, your derriere is a beautiful thing made by God Almighty himself. It doesn't need any more boost than what nature gave it already. Of course, we've been telling that to the bleach and coffee enema people for years now, and have they returned our calls? Nooooo.