The Snake Oil Bulletin: I See Bullsh*t in Your Future 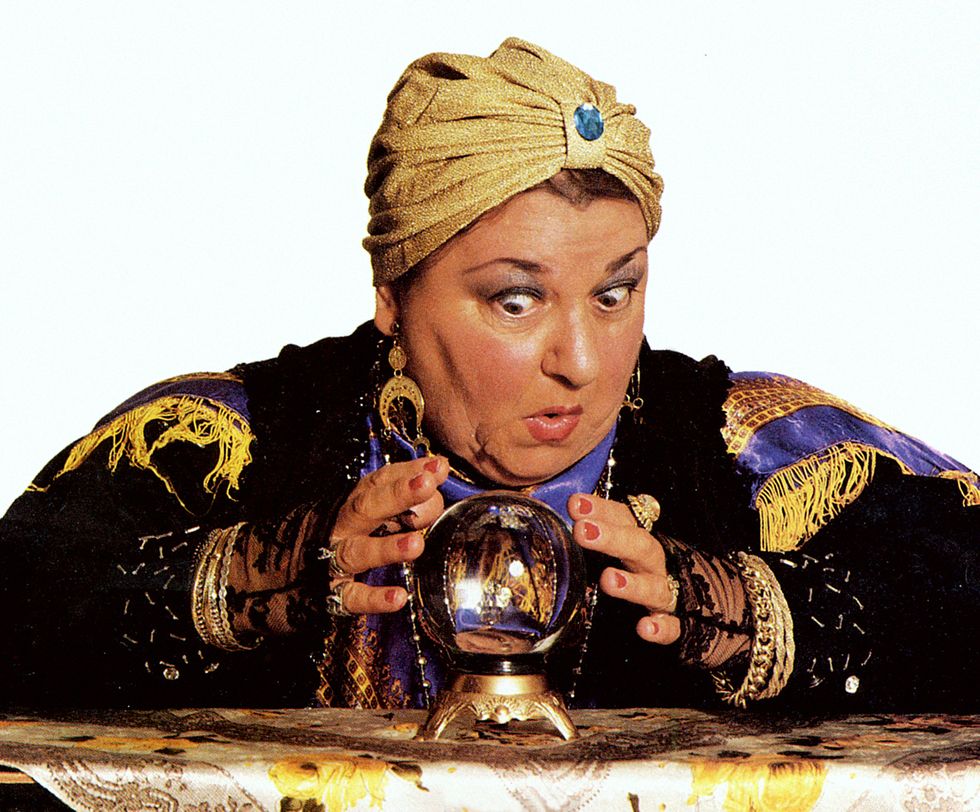 Greetings, Comrades! Welcome back to the Snake Oil Bulletin, your weekly compendium of charlatans and rapscallions just waiting to sell you health, wealth, and salvation if only you'll give them your money. We've got a full pan of bullshit to sift through if we're going to find that gold nugget of hilarity, so let's waste no time and get right down to it.

To start us down our Schadenfreude slip 'n slide, we have an anti-vaxxer getting his just desserts, namely a €100,000 bill.

For four years now, Mr. Lanka has had a challenge on his website that nobody could prove to him that measles is a virus, and he even bet €100,000 of his own money that no one could do it. Well pride cometh before a fall, and boy did that fall cometh. Doktor David Bardens answered the call of Lanka's challenge, and offered a peer-reviewed, comprehensive medical study proving the existence of the measles virus. Naturally Lanka plugged his ears and sang whatever the German version of "na-na-na-boo-boo" is, so Bardens did what any sensible man would do: took that blödes Arschloch to court.

A German regional court examined the data presented by Dr. Bardens and determined that yes huh, they do prove measles is caused by a virus, so pay up, Mutterficker. Lanka still insists that he will never pay the money and will appeal the case to a higher court, which probably says something about this scientific bona fides. When a real scientist is presented with evidence that contradicts his pet theory, he will examine it and either argue his case with more experimentation and testing, or declare that he was incorrect. A con artist will stick his head in the sand and cry until the alternative press declares him a martyr. It worked for Andrew Wakefield.

Our next story is an unfortunate rarity in the world of woo, in that someone has finally been arrested for their chicanery. A Fort Collins couple, Gina Marks and her husband Steve, have been arrested for scamming a woman out of tens of thousands of dollars for psychic readings.

Their victim (who goes unidentified in news coverage of this case) was apparently distraught over a recent break-up, and went to Gina Marks for a palm reading. Marks told her victim that if she burned orange candles (conveniently sold by Marks!) before bed time, the woman would dream about her soulmate. When that didn't happen, the woman concluded that with a track record of 0 for 1, this Gina woman must be pretty trustworthy. She went back to the Markses, who convinced her that she and her entire family were cursed, and that the only cure for said curse was by buying a bunch of crystals (also conveniently sold by Ms. Marks!) and by giving the couple hundreds of dollars in Target gift cards. They also explained that she would need to return to the Markses on the regular for additional psychic readings and rituals.

By the end of their scam, the couple had conned the woman out of more than $36,000. When the police finally arrested the Markses, they found in their possession dozens of stolen credit cards and fake IDs, and even a fake sheriff's badge. Sources could not confirm if the badge was just part of a larger policeman's costume being used for sexy psychic readings.

Apparently, this couple is part of a larger family of low-lifes. Steve's mother was a psychic named Kay Marks who was eventually murdered by her husband, John Marks. Steve's aunt and brother, Nancy and Adam, are also serving time for fraud, which means Gina and Steve will be in good company when they get convicted of class four felony theft and identity theft. The family that plays together stays together, behind bars.

Amusingly enough, the whole family still has a Merchant Circle page littered with bad Yelp reviews. Apparently, Adam's wife, April, was part of this psychic cash cow too, as she tried to convince a poor unsuspecting rube of buying three candles for the modest price of $150 each. Only an idiot would believe that scam, quoth the rube! Of course said rube finishes up her review by lamenting that the Markses have real psychic abilities and are just using them to scam people. Ah well. A fool and their money soon end up on Yelp.

The third story on our roster comes from the greatest conglomeration of bupkis and bullshit this side of Natural News, namely that infinitely shareable purveyor of pure bullshit: Health Impact News.

Your Wonkette has examined HIN before because of its tendency to lie and then lie about the lies it lies about. HIN is the perfect distillation of everything wrong with the internet. You know those obnoxious banner ads that promise 1 Weird Tip for Instantly Melting Away That Unsightly Nose? It probably links to Health Impact News. They have sections devoted to nutrition, anti-medicine quackery, "alternative health" (aka "Everything Causes Autism"), and an entire section solely devoted to coconut oil (we have to commend the coconut oil industry on their ability to market so effectively to the credulous). Yet Health Impact News' bullshit quotient amps up to eleven once you realize they also believe in creationism. No, Seriously. Behold "The spiritual side of health from a solid foundation of creation teaching." Not only do they cry over the fate of poor convicted tax fraud Kent Hovind, but they openly accuse "Darwinists" of being totalitarians, eugenicists, and religious zealots all at the same time.

Yet even with that in mind, this next story takes the cake. In a report that can only be accompanied by the sounds of soft piccolo music and an autumn breeze, comes an article so wooey it may have broken us: Healing from Vaccine Injuries through Homeopathy.

Homeopathy is the belief that diluting a substance makes it stronger. In other words, this article offers a  made-up medicine for a made-up malady. Best. Scam. Ever.

It's hard for us to summarize this article with the requisite dick jokes it deserves because it is fucking long. We're pretty sure even the writer fell asleep halfway through. If you love the length of a dissertation but hate all of that research-y and science-y stuff, this article is for you.

Hilariously, the article plugs a book by Amy Lansky with the completely unironic title of Impossible Cure: The Promise of Homeopathy. Homeopathy can promise all it wants, but it's a pretty impossible cure when there's no fucking medicine in it. The book also plays up Amy's PhD, though a quickie Google search will show that her PhD is in computer science, not generally a field with a lot of medical know-how. If Amazon reviews are anything to believe, Lansky's book claims right at the beginning that she cured her son of autism through homeopathy. How water and sugar pills "cured" a neurological condition we'll never know.

The HIN article continues by unironically (we're using that word a lot for this article because irony seems to disappear in a vacuum in its presence) citing the historical anti-vaccination movement. You know, the people who believed cowpox vaccines would turn children into bovine and drive women to have sex with bulls.

We'll let you read the rest of the hilarity on your own, dear reader, because we only have so many brain cells to kill and those remaining already have a date with a margarita pitcher later today. We will, however, end on a note that often gets left out of coverage of the scam of homeopathy. Further down the article, the author asserts the following:

Homeopathy does not wage war on disease and seek to destroy the symptoms of disease through brute force. It does not bring substances into the body as is done with allopathic drugs, for the purpose of doing hand to hand combat against disease. Instead, homeopathy and its remedies are intended to gently stimulate and strengthen the body so that it can overcome illness through its own vital force and strength.

Homeopathy is based on the long-discredited notion of vitalism, a historical medical belief on the same shelf as the four humours. Basically, vitalism asserts that all living things have a "vital force" that only living organisms possess and which was responsible for all manner of unexplained medical phenomenon, all of which have since been explained by real fucking science. Hell, even Moliere believed this stuff was bullshit, and that guy loved dick jokes even more than Yr Wonkette! Francis Crick, one of the scientists responsible for the discovery of DNA, famously fought against the lingering strain of this alchemical nonsense that is vitalism. He even had a famous quote about the topic with which we'll end our bulletin today:

And so to those of you who may be vitalists I would make this prophecy: what everyone believed yesterday, and you believe today, only cranks will believe tomorrow.

Nailed it on the cranks part, Frankie. Now go give Rosalind Franklin her Nobel already.

We end our Bulletin with a re-cap of the latest tales of chicanery from this, your favorite Trotskyite tumblr account, Yr Wonkette!