The Snake Oil Bulletin: Putting The Moran In Mormon 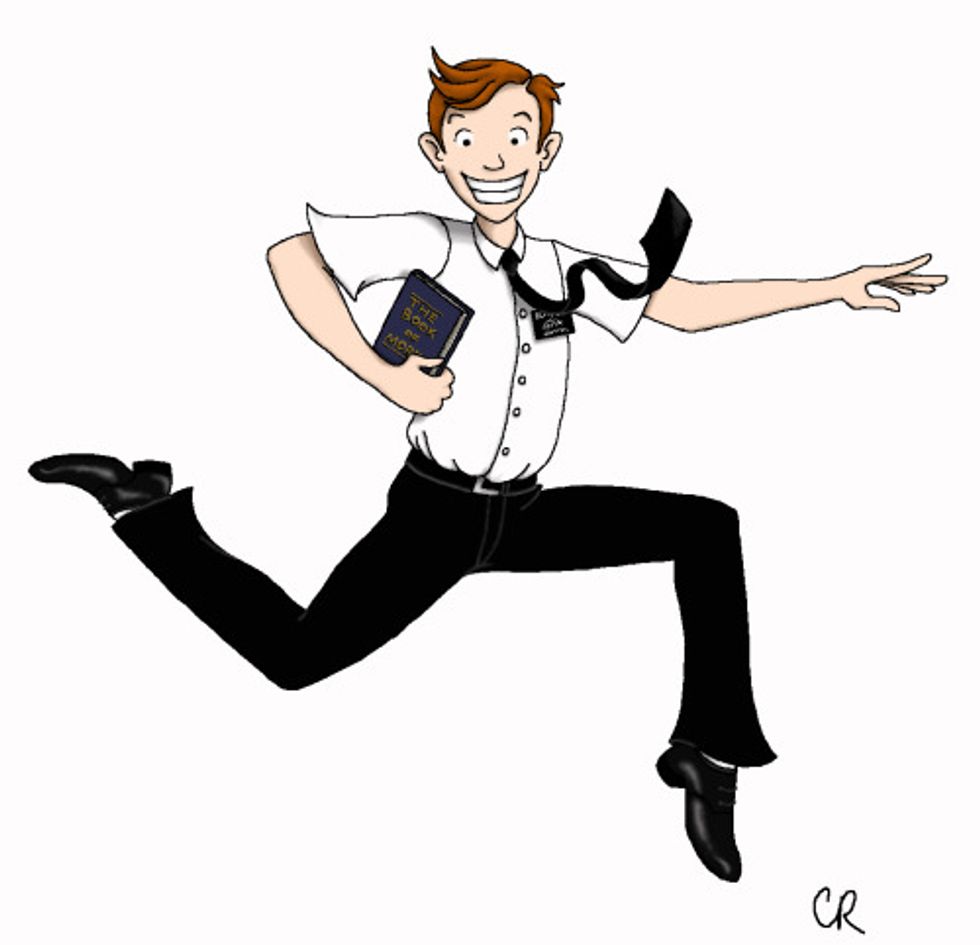 Welcome back, pagans, heretics, and heathens alike! It's time once more for the Snake Oil Bulletin. This week we're taking a break from our usual skullduggery, flim-flammery, and general assorted chicanery to take a look at those nice folks out in Utah making such a stir of things of late. It seems the Mormons have been doing some "clarifying" recently, and the results of the clarification haven't turned out too well for the homosexicans among us.

Mormon church excommunicates gays, their kids, and their little dogs too

On Thursday, word came down from Heavenly Father on High that the Mormon church had changed its position on the same-sex marriage. Noting that they too understood the pain of discrimination and injustice, the brave church elders announced for the world that they loved their homosexual brethren and sistren exactly as they were, that no one had the right to change them, and that they were full and beloved members of The Lord's Celestial Kingdom. This announcement reversed decades of Mormon teachings on the subject of homosexuality, and reflected a change in the church into an organization truly living the unconditional love of God.

AHA! Did we fool you with our silly little funny time joke? We totally didn't, of course, because you know if it's featured on Yr Wonkette it's because something about this story is terrible up-fucked.

Instead of what could have been a great feel good story, gay Mormons awoke on Thursday to learn that they were now officially considered apostates. Sure, the Mormon church wasn't exactly a Streisand concert of tolerance before, but there was a difference between the bitchy side-glance of yesteryear and the now church-mandated investigation into their personal life and disciplinary action of today. But Thursday's announcement added the additional touch that not only were gays expelled, but THEIR OWN CHILDREN were now ex-communicated, giving the betrayal that extra level of knife-twisting it needed to really sink in deep.

The Latter Day Saints clarified a few sections in their ominously named "Handbook 1," the church's go-to guide for church leaders of various levels, especially vis-a-vis same-sex marriage. As part of the church's new policy decisions about same-sex couples, the Elders of the Church have "clarified" the following new rules:

It's not often in America that we hear of organizations proudly following the hallowed tradition of the Chinese Cultural Revolution, in which children were forced at gunpoint to turn in and denounce their parents, but maybe the church Elders are big on historical reenactment! How fun! It'll be interesting to see their reenactment of the Rape of Nanking or the Bombing of Guernica.

Naturally the Mormon apologists were out in full force trying to make excuses as to why telling teenagers that they needed to condemn their own parents is not a morally reprehensible dick move. Take a look at this asshole, who argues that the church elders took the preemptive measure of ex-communicating all those kids because they just respect their parents SO MUCH:

No minor child may be taught or baptized without the consent of his or her parents. Thus, the Church defends the parents’ authority and the parent-child relationship even in a matter—baptism—which the Church regards as ultimately essential for salvation.

Aww, how sweet. They respect the gay people enough not to undermine their parental authority, but not enough to treat them like human beings.

Furthermore, the Church does not believe that a child who cannot receive baptism because of their parents’ action will be condemned. All have a full and free opportunity—either in this life, or in the next through vicarious temple ordinances—to accept the gospel. Others cannot prevent this forever. But, in some cases, a child must wait to be baptized if the parents’ actions make it necessary.

Now, kids, this might sound bad, but it's actually super duper good for you! Okay, sure, this group of grown ass men thinks you and your entire family are a bunch of sick sodomite freakazoids not allowed in their clubhouse even though you have done literally nothing wrong except be born and live with your parents. But the good news is that once you drop dead you can totally get into their super special Jesus group marriage compound! Doesn't that sound fun?

The policy change was originally hushed up by the Mormon elders, and was only shared amongst church members with access to Handbook 1. However, activist John Dehlin got the new handbooks without church approval in a secret briefcase left for him on a bridge by a trenchcoated figure named only The Cipher:

The policy was meant to clarify the church's opinion that same-sex marriage is a particularly grievous sin, but as Dehlin notes in his interview, children of murderers, rapists, and child abusers are still free to receive baptism and go on their mission trips, which means the church considers Neil Patrick Harris' family Halloween costumes to be a more grievous sin than a tinted van passing out needle candy near a preschool.

This Moran expresses a similar sentiment to the above Morans by pointing out that this same policy applies to all kinds of families the church finds icky, including converts raised as Muslims.

It is not a small matter to become a member of the LDS Church. As I explained above, if an adult Muslim wants to become a member of the church, the church may still decline to baptize the candidate simply because of cultural conflicts. Those who were raised in polygamous households also have extra requirements asked of them if they wish to be baptized. This policy is not a sign of a lack of love, but rather, in the context of the plan of salvation, a recognition that the doctrines and ordinances of Christ are for all in His time, not ours.

We're not letting you in our club, Ahmed. It's not racism; it's just not the right time.

To further cement the dick movitude of the spectacle, the rules imposed on same-sex families are the same as ones imposed on those misogynistic FLDS polygamists in their perfectly starched gingham prairie dresses. That means the gays will be keeping good company in their Mormon shunning box, which is perfect because now now they'll have a whole slew of new candidates for some MAKEOVERS, because gurl honey do they need it.

The reaction to the policy from outside the church hierarchy has been overwhelmingly negative, even among lay Mormons like these:

Nikki Packer, who has held multiple presidency positions with the Primary program for LDS children [said]

"I am absolutely heartsick. There doesn't seem any real need to adopt this policy. We baptize children all of the time who have one or more parents who disbelieve or are not in good standing. This policy is so hurtful to gay members who love the gospel (and many do). To do this intentionally does not seem reflective of Christ's mission."

Alice Roberts, who has been a Primary president and in a women's Relief Society presidency [said]

"I am struggling to reconcile how this policy is in any way acceptable. Church leaders have stated in the past that it is OK for an active member to support same-sex marriage, but now it would appear that that only applies if it is NOT your parents' same-sex marriage. I find the implications for this policy frightening. If same-sex marriage is apostasy, does that mean that those who associate with their LGBT-married family members are associating with apostates and will be disqualified from holding a temple recommend?"

Mormon elders were not available to comment on apostasy transmission via cooties, but considering their policy on converts from Muslim homes we're not holding our breaths.

Reports are coming in from across the LDS world that whole families are leaving the church thanks to the the exclusion of their loved ones and children. Seventeen-year-old Francisco was left with the awful choice of either missing the mission trip he's been planning his entire life, or publically denouncing his own father. Even though his father urged him to just denounce him and go on his mission trip (because that is selfless parenting), Francisco couldn't do it, so he and his mom have instead opted to resign from the church entirely. They're now making plans to send Francisco on a mission with the Peace Corps instead.

Reports are also coming in across the Facespacester of families like Devon's, who, despite being split from their mother and now living with his hunky boyfriend, decided to raise his sons in the Mormon church out of respect for his ex. Under the new policy, his two sons will not be granted baptism or any kind of church sacrament:

I've hesitated to post this because I don't want to turn my family into a political statement. However, the LDS Church...

Do you hear that, Elders? You hurt these two wonderful hunks, and that is the most grievous gay sin of all.

While the church has released an official statement in an attempt to justify the policy, who fucking cares? For all their talk of families being forever and the church respecting the sanctity of familial love, it's all a crock of shit. Policies like these, which force members to choose between their eternal salvation and the love of their own family members, just reveal the church elders for what they are: assholes. They're assholes who don't care how many families they split up or children they make cry, just so long as their freshly laundered bleach white collared shirts aren't tainted with anything so impure as a loving family. You know who ELSE placed the importance of an imaginary purity test over the pain of millions of families? That's right, assholes.