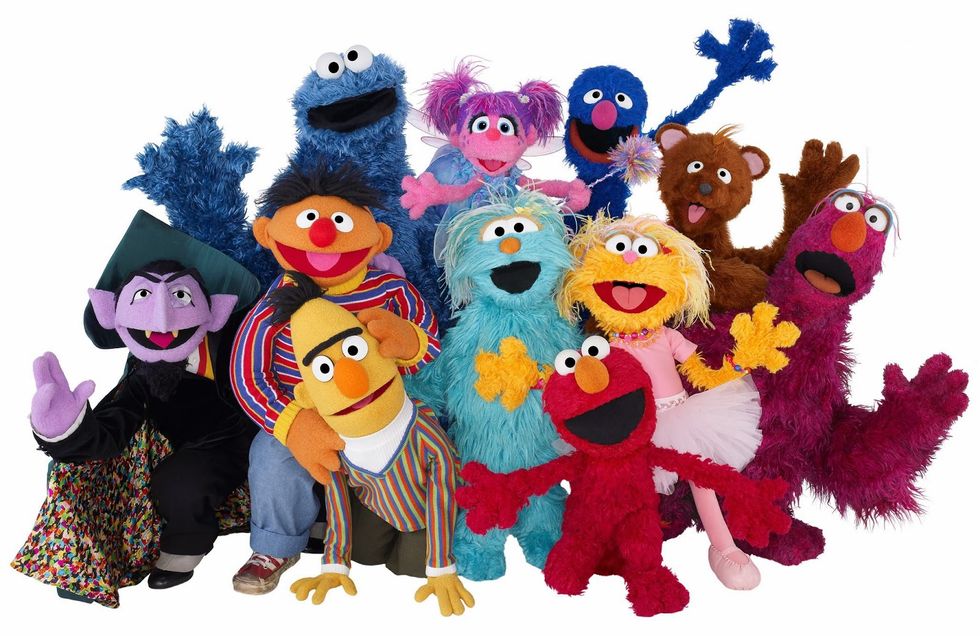 The real holocausters, we guess.

Greetings, pilgrims! Saddle on up to the caravan here, and let your old pal Dr. Volpe spin you the tale of a joker-faced jackal-beast who decided to pick a fight with puppets. As you'll soon see, dear reader, up against an opponent whose head is literally made of felt, our hero's brain just doesn't have the stuffing. Let's dive in.

Continuing its unbroken record of being wonderful, the Sesame Street Workshop announced this week it was introducing a new character, Julia, to its cast. Julia has autism, and her introduction coincides with the Workshop’s new See Amazing campaign, which tries to teach kids about autism. From the incredibly adorable videos already posted, it seems a big goal is to teach kids (and some parents) that their autistic friends are not weird or scary, they just do things differently, and that’s okay. Watch as Grover meets two twins with different kinds of autism and their rad helper sister, and if you don’t crack even a little smile you are hopeless, because Grover is the best and oh god these videos are so cute.

But sweet little videos about kids being kids was too much for the fine, upstanding idiots of our great nation. Which idiots, you might ask, knowing full well our culture breeds idiots like a petri dish breeds bacteria? Why the anti-vaxxers, of course! What other idiots hate their children so much they would prefer them dead over medicated?

It’s no secret anti-vaxxers believe vaccines cause autism. The number of scientific studies supporting this claim is holding steady at zero, but facts never got in the anti-vaxxers’ way before. What’s a little less known is just how much anti-vaxxers hate autism itself, which we continue to note is a different kind of neurological wiring, not a disease. Heck, the anti-vaxxer's entire campaign is built around the idea that having virulent polio or measles is a better alternative to autism. A different way of processing sensory information is worse than suffering and death to these people.

So it comes as no surprise that the anti-vaxxer campaign against what they continue to insist should be called "vaccine-injury" has started to take a disgusting, vicious turn, which not only attacks vaccines and vaccine-providers, but also autistic children and their families. So, of course, the anti-vaccine fuckheads at Natural News absolutely hate this new autism muppet.

Continuing THEIR unbroken record of being horrible human beings, the needle-dick anarchists at Natural News saw the introduction of this child made out of felt and asked the gremlins who infest their collective hive mind if today is the day they would attempt even basic human decency. The gremlins said no, and who is Mike Adams to disagree?

Mike Adams, you’ll remember, is the proprietor, founder, and chief editor of NaturalNews.com, our nation’s loons’ premiere source of information losing internet debates. A fun game to play if you have no job and hate yourself is to come up with a conspiracy theory at random by stringing together disparate snarl words and see if you can find an article advocating it on NN. Chemtrail pilot murder conspiracy? They got it. Paleo diets curing cancer? Yes indeed. Monsanto poisoning genetically modified tampons? Oh, you are too good at this.

In a blistering op-ed, Adams attacked Sesame Street for its attempts to "normalize" autism, which, again, he insists on calling "vaccine injury." (Since we at Yr Wonkette are not complete dunderpusses, we will not be indulging him by using his terminology.) Adams contends that autism is solely the result of the mass vaccination hordes rampaging across the country, led by no less than that little red Genghis himself, Elmo Kahn.

Another Sesame Street character, Elmo, has been exploited as a literal puppet by the vaccine industry to push a pro-vaccine message alongside the U.S. Surgeon General. It is instructive to realize that even though the vaccine industry claims its vaccines are based on scientifically validated safety claims, it must use social engineering tactics on children to attempt to portray vaccines as being recommended by their favorite muppet characters from Sesame Street. The tactic smacks of the same kind of exploitive propaganda programming used by sugary breakfast cereal makers to influence children with Saturday morning cartoon ads.

We would take the time to debunk this, but why even bother? He doesn't cite a single reputable source other than an article from CNBC that says flu vaccines make some money, which is shocking thing Mike for some reason. Does he expect scientists to do their jobs, day in and day out, and not ask for at least a meager bit of money in return so they can eat and buy safety goggles?

Among the other "sources" Mike cites, four of are just links to other Natural News articles, one is a link to the CDC's homepage (A-ha?), and one is a link to Health Impact News, a site that combines all the fun of anti-vaccine lunacy with the down-home goodness of Grampappy's old-fashioned creationism.

The fine folks at Raw Story also found out that Julia has also angered the flying monkeys at the Vaccine Resistance Movement Facebook page. Like Mike, it's their contention that an attempt to treat children with autism like actual people goes TOO FAR.

“We won’t be injecting any toxins into OUR child,” the anti-vaxxers no doubt crow, sterilizing the nozzle on their baby’s bleach enema.

But Facebook comments are a slippery slope to YouTube comments, so let's make one last pit-stop with Mike before we shut this rambling caravan down.

The rollout of autistic Julia is Sesame Street's attempt to "normalize" vaccine injuries and depict those victimized by vaccines as happy, "amazing" children rather than admitting the truth that vaccines cause autism in some children and we should therefore make vaccines safer and less frequent to save those children from a lifetime of neurological damage.

You’re right, Mike. Sesame Street is trying to “normalize” autism, in that they’re trying to show people it is a normal condition that normal kids have, and doesn't make them any more broken or afflicted than kids with any other conditions. Autistic kids are not neurologically damaged, you patronizing farce of a man. In fact, it's comments like yours that lead many to the pretty obvious conclusion that anti-vaxxers actually despise kids with autism, because you can only see someone as destroyed for so long before you stop seeing them as human. These are kids who want to play, be with their families, and live their lives without assholes like you stomping through their nice happy homes screaming about how "damaged" they are.

Sesame Street is teaching kids that having a friend who’s different is normal, and that if anyone ever tries to tell you that something about your friend is wrong, that his brain is “damaged,” or that he needs to be “cured” of the thing that makes him special, you can tell that person today’s program is brought to you by the great big capital letters 'F' and 'U'.

It's rare yr Wonkette mentions other mommyblogs -- why ever would we send our readers to other mommies when we can #MomHarder than they could ever hope, and we drink booze while we do it? However, in this instance we'll make an exception, as we're quite sure no one will be frequenting this particular mommyblog in quite some time.

According to police reports, an Australian mother  was caught injecting her sick 9-year-old daughter with urine in order to have an excuse to take her to the hospital. The mother goes unnamed for legal reasons, but apparently she was a big enough deal that her blog was prominent in the Australian Mommyweb, and her daughter's condition was well known enough that she was featured on billboards promoting various charities.

While the child does have genetic conditions that require her to regularly see doctors and specialists, hospital workers became concerned at the frequency of the child's visits and began to investigate. After the child was admitted for renal failure in March, doctors noticed a yeast infection was growing in her IV line that led to the child's jugular. THAT IS NOT A THING THAT HAPPENS. Doctors knew this could only mean one thing: someone had tampered with the child's equipment. The hospital immediately contacted the police and Child Abuse Squad, who, having watched enough episodes of "Law & Order," knew to check the immediate family first. Upon checking the mother's handbag, investigators found syringes, laxatives, and urine samples, all of which indicated the mother had been giving her daughter powerful laxatives to make her sick, and then either injecting the girl or injecting her IV with yeasty pee in order to KEEP her sick.

If you were looking for a textbook case of Munchausen by Proxy, look no further. According to ABC, the mother had been writing on her mommyblog for some time now, loving the praise she received from readers for being so good and noble and suffering through her daughter's pain so. You'd think someone would have noticed incredibly damning sentences like this somewhere along the line:

"I wanted him [the doctor] to treat her. Do something. Anything. She was in pain and I could see she was becoming unwell," the mother, who cannot be named for legal reasons, wrote in her blog, which has now been removed.

The mother faces ten years in jail for knowingly poisoning her kid, though no doubt in her mind the far greater punishment is the loss of the sweet, sweet internet fame. People are the worst.