The Stupidest Man On The Internet Ran A Bogus Story That Shut Down A Plan To Help Border Children. Hooray! 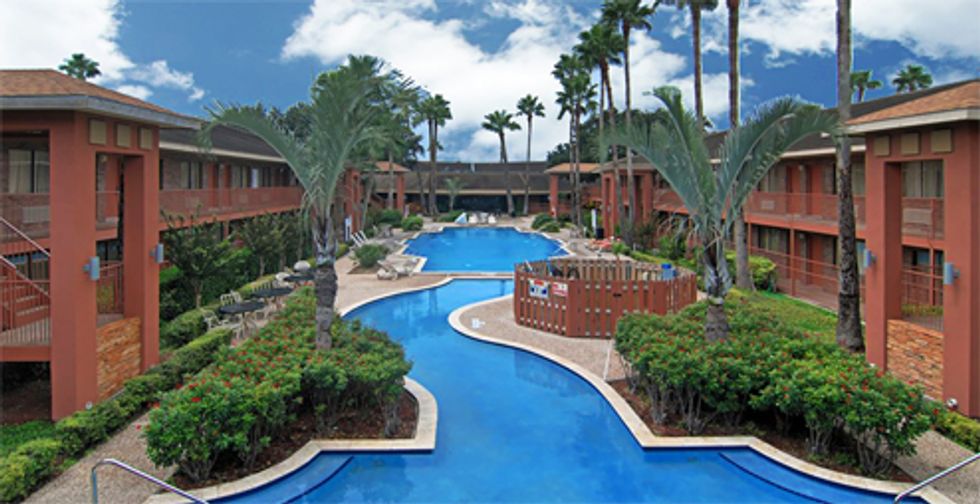 Jim Hoft's idiocy is usually merely paranoid and malicious, but mostly the crap he projectile vomits onto the interwebs does little more than whip up the wingnut howler monkey brigade's lowest passions. They throw poo, and move on. This time, though, he's really scored a coup: Hoft ran a lie-filled story by Stupidest Guest Blogger on the Internet Kristinn Taylor, with the pretty much fact-free screaming headline "FEDS TO OPEN $50 MILLION RESORT for ILLEGAL CHILDREN -- Complete With Tennis Courts, Sauna & Pools." My goodness that's shocking! And it's also pretty much one lie after the next. But here's the kicker: After the story hit the Wingnuttosphere, it generated so much hate that a charity that was going to buy and refurbish a run-down motel to house immigrant children announced that it was going to drop the plan. So now the kids can remain in the overcrowded jail-like conditions that Hoft was decrying a week ago.

So, here's the reality, thanks to Charles Johnson at Little Green Footballs: A Texas charity, Baptist Child & Family Services, was planning to purchase and convert a run-down former Best Western motel, the Palm Aire Hotel in Weslaco, into a 600-bed facility for immigrant children between the ages of 12 and 17. Now, until the deal goes through, the Palm Aire is still operating as a motel -- with a whole lot of one-dot reviews on TripAdvisor. Since it's a going concern, Kristinn Taylor was able to find the motel's website, which of course features photos presenting the place as a luxury resort -- which it may have been at one time:

And going by the website, it's OBVIOUS that the immigrant kids will get all the amenities, like the weight room, the tennis courts, the Jacuzzis and the "free Wi-Fi and cable TV" and all that, because in wingnut world, that just goes without saying. It's not as if the current owners would strip the place and sell the building, because that doesn't fit Taylor's narrative. As to the pristine condition of this high-class resort, had Taylor looked at TripAdviser, he might have found complaints that the cable TV didn't work, the bathrooms are dirty, and the pool was filthy -- plus photos of a dirty AC unit and a toilet that blocks the bathroom door from closing:

And with a little bit of digging -- not that Mr. Taylor would bother, of course -- it's clear that after converting the place into a shelter, it wouldn't be anything like a "resort." For instance, here's another shelter run by BCFS:

Look at all the luxury! Ah, then again, why pay anything for even Spartan accommodations, when we SHOULD just ignore the law and deport them immediately? Due process is for people, not Guatemalan children.

And as for that "Feds" part, no, not the feds, a private religious charity that gets money from the feds to assist people, but the money to buy the motel was raised privately, not a grant from the government. Remember when the political right used to just LOVE "faith-based initiatives"? Yeah, but that was before they were helping brown children. Illegal diseased brown children.

As for the "annual contract for $50 million" figure, that's the Greatest Lie of All, and based on what has to be either deliberate distortion or unbelievably bad reading comprehension. There was no $50 million dollar award. In the local paper's story about the bid, however, we do find this: A county commissioner, A.C. Cuellar,

added that the project, which BCFS said will employ 650 people and have an annual economic impact of some $50 million, would be a major development boon.

OK, so the project would inject $50 million a year INTO the economy, mostly in the form of wages. From a nonprofit private charitable group, the kind that wingnuts are always screaming should take care of the poors. It wasn't any annual contract the Feds arranged for a "resort for illegal children."

But of course, the story grew and grew, and got picked up by Fox News and Todd Starnes and Laura Ingraham and all the rest of the Wingnuttosphere and by Wednesday afternoon, BCFS had announced that it was dropping its bid, citing "negative backlash caused by information misreported to the public" as the reason it was walking away from a deal that could have doubled the amount of space that it could have used to house children.

So now the kids will stay in the care of the Feds, in cramped conditions, and quite possibly at higher cost, since none of the expense will be shared with donors.

Kristinn Taylor did file an update to the story Wednesday, proclaiming victory. It said that the $50 million deal had been dropped. And Fox News went along, repeating the "$50 million contract" lie.

There is no amount of debunking that is ever going to bury Kristinn Taylor's lie, as published by Jim Hoft. And the children will remain where they are. Excellent work, gentlemen. We bet Jesus is incredibly proud of you both.

Follow Doktor Zoom on Twitter. But don't get too close at the moment -- he's white-hot with rage.