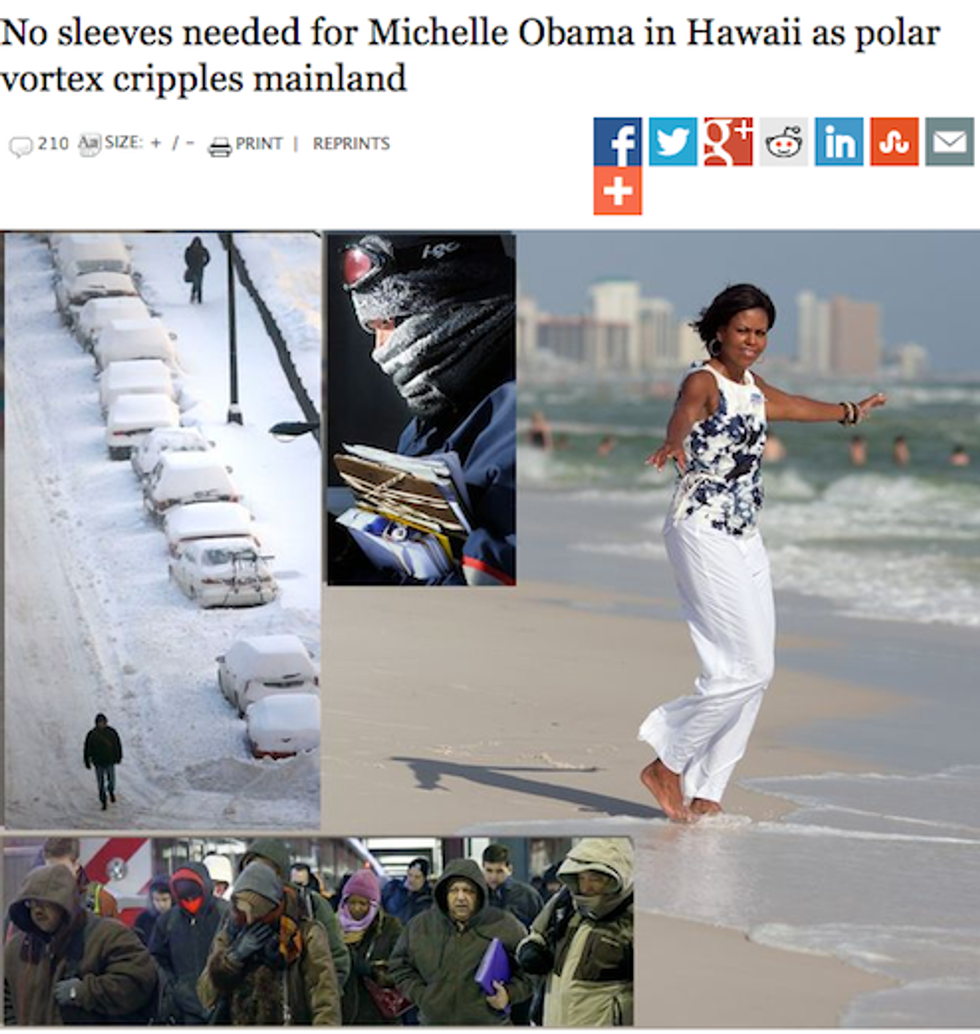 Are you part of the one-hundred-and-eleventy percent of America that is freezing right now? Have you barricaded yourself in your house and then set the house on fire, for warmth? Have you taken to wearing your pets as housecoats? Whose fault is that, hmmmmm? Is it global warming causing increasingly catastrophic weather? Is it a new ice age? Nope! It is Michelle Obama's ravenous and careless need for sun on her bare arms, which everyone knows literally takes the sun away from you, you poor landlocked Midwestern bastard, and drops it on her sleeveless guns over in foreign Hawaii. Up until now, you weren't sure that it was FLOTUS' fault, though you had an inkling, but the Washington Times is here to connect the dots for you.

“When you get that feeling like you can’t feel your fingers anymore or it’s so painful you can’t feel your fingers, you definitely need to head inside,” said Dr. Leana Wen, an attending physician and director of patient-centered care research in the Department of Emergency Medicine at George Washington University. “You should always cover up, any time it goes below freezing, including with the wind chill,” she said. “Make sure to cover your extremities. Make sure you’re wearing gloves, scarf, ear muffs.”

The crippling cold is a far cry from the Oahu breeze First Lady Michelle Obama is enjoying during her extended Hawaii vacation.

Mrs. Obama remained in Hawaii for some extended R&R after President Obama and daughters Malia and Sasha arrived back at the White House Sunday after a lengthy holiday vacation. Her private vacation was a birthday gift from her husband.

While Honolulu is facing overcast skies with a high of 77 degrees, the current forecast for Washington Dulles International Airport on Tuesday is a potentially record-breaking 3 degrees. The current forecast is 7 degrees for the District, where the record low for Jan. 7 was 5 degrees in 1884.

See? How dare she take an elitist private vacation paid for by Barack Obama aka YOUR TAX DOLLARS. That's right, sheeple! Your money is paying for Michelle Obama to get a tan RIGHT NOW while you wander around your shitty apartment with your housecoat worn over your sweater worn over your flannel shirt worn over your long underwear, looking like the goddamn Michelin Man. UNFAIR! INPEACH MICHELLE OBAMA.

Keep yourself warm tonight with your white hot incandescent rage directed at Michelle Obama for blocking out the sun. Lord knows there is no other way you're going to stay warm enough.