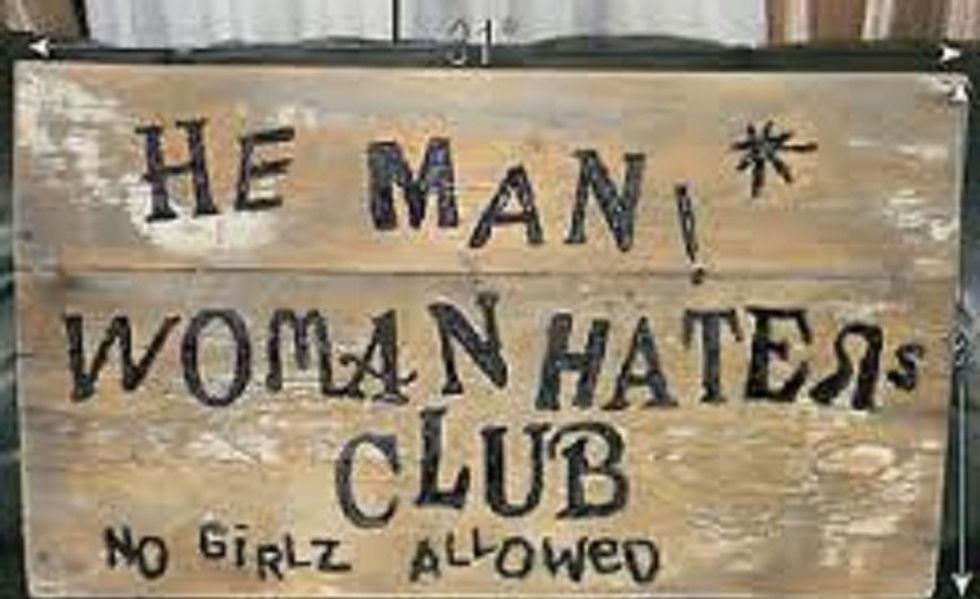 If there is one thing that this year was not short on, it was men who were the absolute WORST. It was the year we all found out (for sure) that legions of men in power had used that power to sexually harass and assault myriad women throughout their career. It was the year that many of you Wonkette readers first found out about the wonderful world of incels, MGTOWs and other manosphere varietals. And for that, I am heartily, heartily sorry.

But let's do a review anyway!

Ah, the incels -- "involuntarily celibate" men, for the unintiated. We learned a lot about incels this year -- at least up until they were finally banned from Reddit on account of how much time they spent explaining why rape should be legal.

And maybe just a little bit for things like this:

I was going to my doctors for a routine blood test (taking thyroid replacement) the femoid working at the front, lead me to his office. She was wearing grey leggings totally revealing her ass curves with a damn wedgie. As I followed her she put her hands behind her ass and locked fingers to cover her ass as she walked me to the room

Like no, I am not allowed to look at her ass that she’s showing off to attractive guys. Despite the fact she had the pants up her ass. Femoid be like “Omg my ass is in view of this loser!! Must block his view!”

If it was chad she would have stuck her ass out further and “accidentally” dropped her pen to bend over.

What’s the point anyway? When I was actually having a half decent morning in an OK mood She just had to remind me I’m a reject and god forbid a beta sees her ass.

MGTOWs are "Men Going Their Own Way." So they're sort of like incels, but on purpose, though they hate women just as much. One of the big focuses of MGTOWland this year, I found, was sex dolls, and how they will replace all of the living breathing women in the world. Women, they claim, are very scared of the day when that will happen and are doing everything in their power to prevent the dream of sexbots from coming true. Or something.

One of the ways we will do this, they claimed, would be by accepting sex robots as the new standard of beauty and trying to look like them instead of the other way around. That was pretty weird, honestly!

Lol, thanks. Ironically, the real girl is putting on makeup that makes her look MORE like a doll than a real life woman.

So goes to show sex dolls will be the new standard of beauty, not the other way around.

Also, I wouldn’t be surprised if they could actually make a doll that looks like her. The ones available aren’t that far off in realism at all.

They also, unsurprisingly, had a very unique take on the Weinstein scandal!

What is the fucking point of being that rich (net worth $255 million) and powerful (can cast anyone he wants in films with A-list celebs), if you still have to beg and grovel like this audio recording of his? What the fuck? pathetic. IF I had 1/100th of his fortune, I could be living like a absolute king in any number of countries.

The Time We Made It Into The Return of Kings Wiki!

Earlier this year, I found out that I had my very own entry in the wikipedia for the misogynistic site Return of Kings. You know, the one that was founded by that Roosh V guy who lives in his mom's basement? So I wrote about it on here, and many of you kind Wonkers rushed over to edit it to say NICE things about me and my clown face that I have.

There is still an entry for me, over at the "Male Monarchs Wiki," which is I guess what they are calling it now. Maybe they've returned already and we don't even know it? It's still practically the same, but now it mentions all of YOU as well!

Robyn Pennacchia is a Wonkette typist who has written numerous anti-Roosh V and anti-Donald Trump articles for the site. Roosh quipped on Twitter that he wouldn't bang Pennacchia due to her having a "clown face", describing her article "Bonus To Hating Trump: Gross MRA Dude Roosh V Won't Want To Bang You" as "childish".

After she posted an article about Kings Wiki to Wonkette, her readers launched a vandalism campaign against the wiki.

We did it! Thanks Wonkers! Oh, and because the Kings are so gracious, they left up the version of the article that one of you made as the "Wonkette Approved Version." Who could ask for anything more?

2017 brought us the beautiful gift of The Proud Boys. Started by Vice co-founder, terrifying bigot, and all around horrible person Gavin McInnes, the Proud Boys are a "Western Chauvinist Fraternity" of men who, um, love housewives and can name five brands of cereal. They even had a THEME SONG.

One Proud Boy you may be familiar with is Jason Kessler, who organized the Charlottesville Unite The Right rally! Nice!

Anyone remember 7-Eleven going out of business?

You probably forgot all about this -- and I did too! Back in April, A Voice For Men writer Doug Mortimer encouraged his fellow MRAs to boycott 7-Eleven. Why? Because they did a contest for aspiring female entrepreneurs who might want to open a 7-Eleven franchise of their very own.

I just saw a 7-Eleven yesterday, so I think they are doing OK! Sorry, Doug!

I thought about trying to list all of the men who got called out this year -- Weinstein, Al Franken, Roy Moore, Matt Lauer, Kevin Spacey, Russell Simmons, Louis C.K. -- but people have already done that and probably missed a dozen or so themselves. There are too many to count.

But if there was one very, very good thing to come out of this year, it was that not only did a bunch of garbage men get called out on their little "issues" with sexual harassment and sexual assault -- but that we all stopped feeling shocked every time it happened. We stopped thinking "Not him! It couldn't be him! Oh no, does this mean I have to hate his movies now?/ NOW MY CHILDHOOD IS RUINED!/ Ignition is a really good song, ok?" because, well, yeah -- sometimes it could be him and was. The important thing about this, really, is that being a guy everyone loves from afar stopped being a protection these men had against being outed as a predator. That people who are victimized by beloved icons no longer have to think "Oh goodness, who would ever believe me?"

We are jaded now, and that's a good thing. Because we shouldn't assume we know a person's character simply because they are famous. The only two men, at this point, that I'd be genuinely surprised to learn were predators would be Mr. Rogers and Levar Burton. But even then I probably would not fall down dead. This is a good thing. Kill your idols.

For all the garbage we sifted through, this happened. And the incels got kicked off of Reddit forever and are now quarantined on a messageboard that people will be far less likely to wander into by accident. Maybe 2018 will be the year we finally ban men FOR GOOD.

I kid, I kid. Just the garbage ones.