The Year In Secession 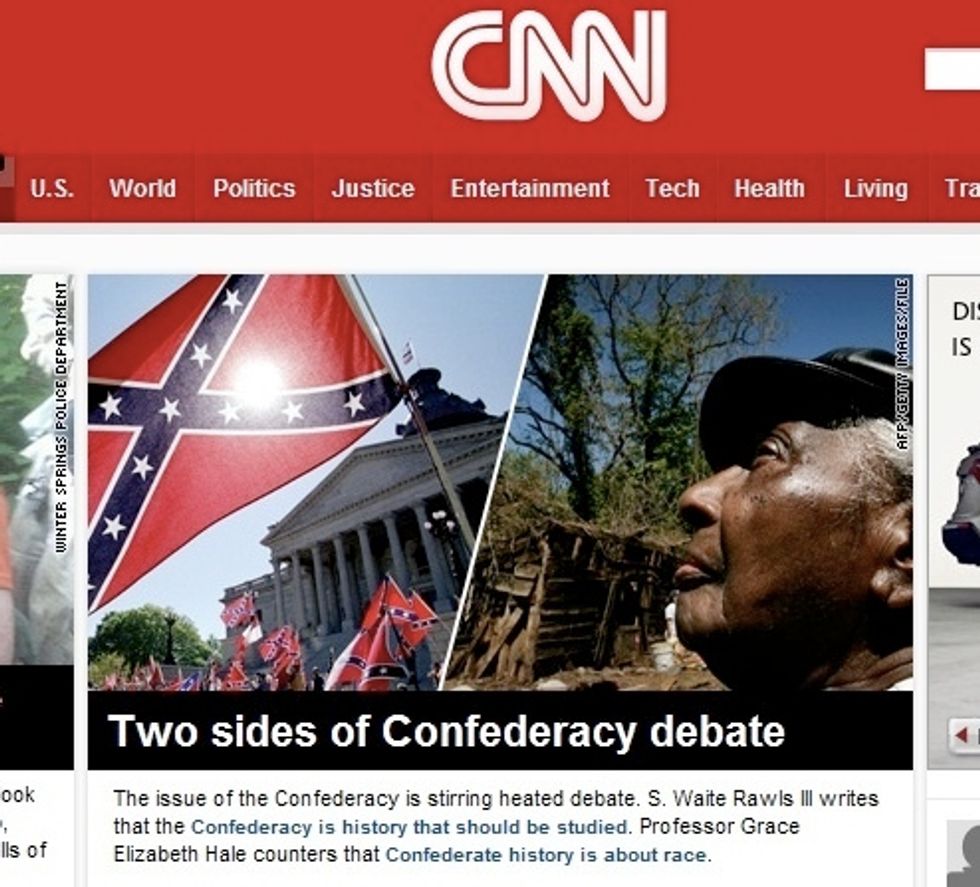 Your Jack Stuef has now been an (often "the") editor for over half of this year, so your affection for all previous editors should now be extinct, and he should be allowed to do year-in-review type things with the consent of the blog-governed. It has been a crazy year in politics (a.k.a. "a year"), so that has been nice for us, as usual, even if that's not great for, say, mental health. Remember when Barack Obama stoled health care for all the youngs under age 26, for example? And then he became a Republican? And then he came back and passed a gay draft into our military for our gay wars, against the wishes of prominent assumed gays such as Lindsey Graham? Anyway, let us count down some of the important themes of this Great American Novel that was the 2010 shitshow. First up: secession and a return to the Confederacy! Never forget.

Seeing as we were safely in the 21st century, it was suddenly politically expedient to call for your state to return to the good ol' days of slavery (sorry, "states' rights") by seceding from the Union that provides you with highways and a national defense and federal funding and such. This, in turn, gets you attention and the votes and Social Security checks and message-board fervor of crazy white people. And it wasn't even Rick Perry who did it this year!

In March, Rep. Paul Broun of Georgia let us know that health care would be worthless as Confederate money after the Civil War. Haha, those Confederates were dumb! Wait, no, the low value of Confederate money was the Yankees' fault, by the way, according to what may be 2010's biggest, craziest aside:

In April, Virginia Gov. Bob McDonnell honored the brave slave-owners who fought an insurrection against their country (*COUGH* traitors) so that they could own human beings. And he did not honor those people who were treated as property (and not even the kind of property you care about if it breaks), because tourism. Forward thinking!

Also in April, CNN did this. And they continued steadily to lose all their viewers forever, somehow.

In July, Congressman Zach Wamp, was in a bitter contest against our pal Basil Marceaux for governor of Tennessee. He said he was super annoyed that states would have to go through that painstaking secession thing again, yet they would have to of course if they didn't elect people like him to solve the problems (of not-slavery?). He lost his primary, so presumably Tennessee will secede in anger over his loss any day now.

In September, the National Federation of Republican Women had a cocktail party in South Carolina at which everyone dressed up like slave-owners and Confederates. Some black people in period clothing (slave wear) were shipped in and presumably paid, this time.

Oh, and at that thing, they had a "live auction." Good thing to do so close to an election. In South Carolina, at least.

On election night, Carl Paladino joked drunkenly about his state seceding during his insane concession speech. And the South was like, "No, that is the home of the Yankees, according to sports."

Also, Arkansas elected a state representative who was (is?) a leader of a group that calls for a restoration of the Confederacy as its primary goal. He said the stars and bars is "a symbol of Jesus Christ." Yeah, probably. That guy loved enslaving black people. Which is why the valiant Christ bayonetted himself when Lee signed the surrender.

And, finally, last week, South Carolina had ANOTHER FUCKING SECESSION BALL, because those things are so successful with that particular brand of white people and there is no level of public scorn that will ever convince them to do otherwise, until that state blows itself up through its own stupidity.

It was the perfect cap to a banner year for secessionists. Change, Progress, Lean Forward, etc.