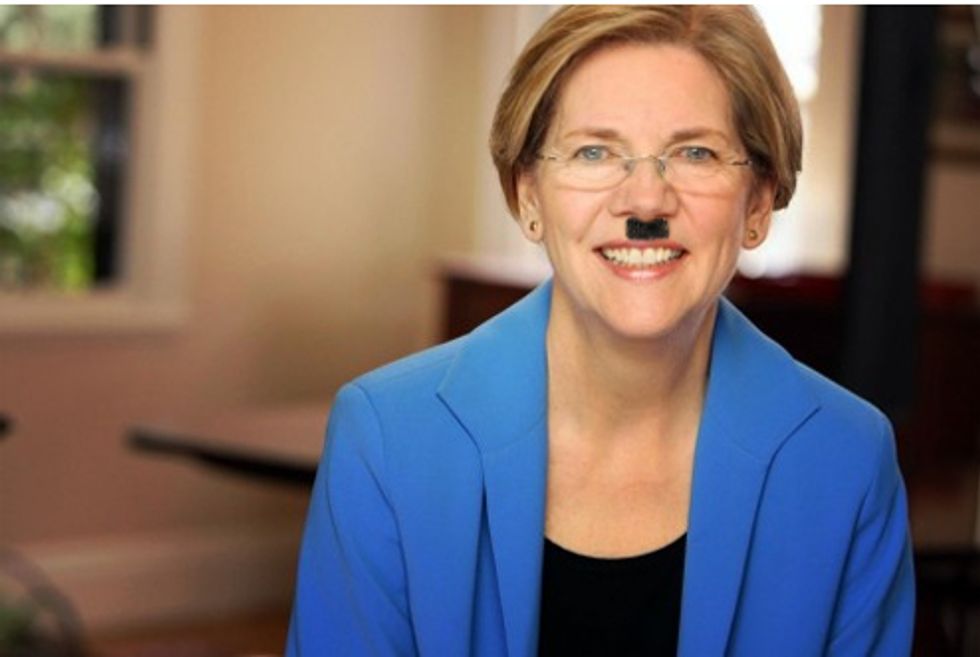 Having successfullyfucked over a Texas charity last week, Stupidest Man on the Internet Jim Hoft decided to try some new formats over the weekend, and attempted a Buzzfeed-style listicle. For instance, based on a tip from a reader, he noticed some ideas in Elizabeth Warren's 'Eleven Commandments for Progressives" that were "EERILY SIMILAR" to the "25 points of the Nazi Party" as promulgated by Hitler in 1920. We looked at the two lists, and we have to agree: they are both lists!

First off, you have Warren's list of 11 principles that she said answer the question, "What does it mean to be a progressive?":

Warren also added that in her view, the chief tenet of conservatism is "I got mine. The rest of you are on your own."

Then Jim Hoft points out:

Yep, that Hitler was such a socialist, what with putting all the socialists in concentration camps. Now, we're not going to list everything in the Nazi Party list of 1920, because Hoft (or maybe his reader) highlights the ones that are EERILY SIMILAR to Elizabeth Warren's list:

13. We demand the nationalization of all trusts.

14. We demand profit-sharing in large industries.

15. We demand a generous increase in old-age pensions.

16. We demand the creation and maintenance of a sound middle-class, the immediate communalization of large stores which will be rented cheaply to small tradespeople, and the strongest consideration must be given to ensure that small traders shall deliver the supplies needed by the State, the provinces and municipalities.

Gosh, strong regulation of Wall Street IS exactly like nationalizing the banks, isn't it? And lord knows, the only people in favor of Social Security are Elizabeth Warren and her Marxist pal Hitler. And you know who else wanted a "sound middle class"? Besides every politician ever, we mean?

20. In order to make it possible for every capable and industrious German to obtain higher education, and thus the opportunity to reach into positions of leadership, the State must assume the responsibility of organizing thoroughly the entire cultural system of the people. The curricula of all educational establishments shall be adapted to practical life. The conception of the State Idea (science of citizenship) must be taught in the schools from the very beginning. We demand that specially talented children of poor parents, whatever their station or occupation, be educated at the expense of the State.

21. The State has the duty to help raise the standard of national health by providing maternity welfare centers, by prohibiting juvenile labor, by increasing physical fitness through the introduction of compulsory games and gymnastics, and by the greatest possible encouragement of associations concerned with the physical education of the young.

Yes, That Elizabeth Warren is in favor of students going to college and women having equal access to healthcare -- JUST LIKE HITLER!!!!

We hope that Gateway Pundit readers will immediately refuse to use other Hitlerian schemes, like the Interstate Highway System, or as we like to call them, Hitler Roads. And of course, we should also remind them that the Nazi doctors in Hitler's socialist medical system injected patients with "antibiotics" to "fight infection" -- another pernicious Nazi ideal that must be rejected by clear-thinking Americans.

Strangely, though, there are some parts of Hitler's agenda that don't sound all that much like anything Elizabeth Warren said. Consider these points from the same list. Don't they sound like something a Tea partier could get behind, especially with this big Crisis on the Border?

5. Those who are not citizens must live in Germany as foreigners and must be subject to the law of aliens.

6. The right to choose the government and determine the laws of the State shall belong only to citizens. We therefore demand that no public office, of whatever nature, whether in the central government, the province, or the municipality, shall be held by anyone who is not a citizen.

8. Any further immigration of non-[Americans] must be prevented. We demand that non-[Americans] who have entered [America] since August 2, [1990], shall be compelled to leave the [Republic] immediately.

America for Americans! Uber alles, even.