There Is Nothing Funny About Last Night's Botched Execution In Oklahoma 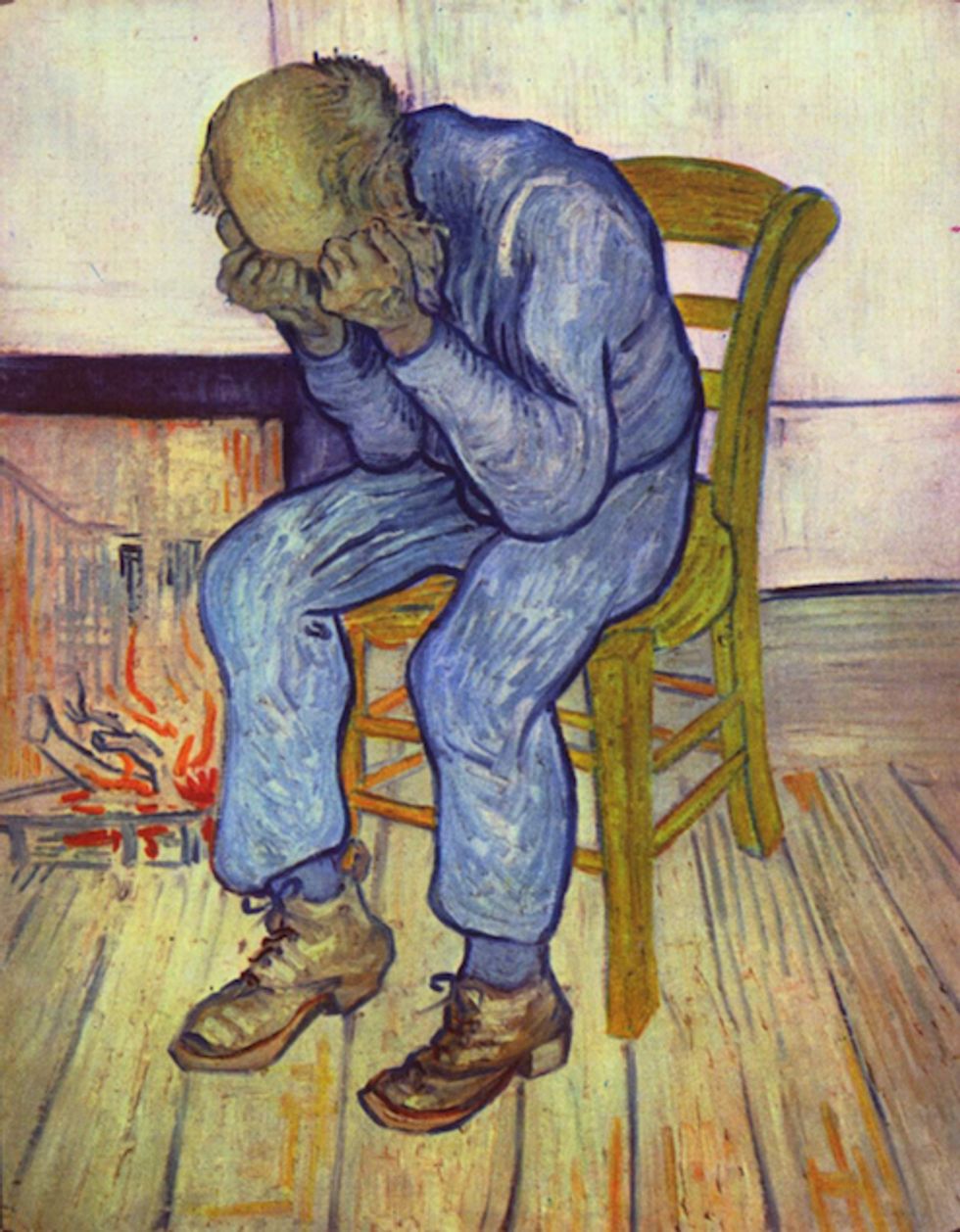 You know how after 9/11, before the jingoism and the bullshit, all you wanted to do was cry, and even The Onion couldn't really make fun of what happened and just went full on poignant and wrote pieces about baking cakes and having your neighbors come over because you didn't know what else to do? That's pretty much how we feel about the botched execution in Oklahoma last night.

An Oklahoma inmate who was supposed to be executed Tuesday instead died of a heart attack after the execution was botched, state officials said.

Clayton Lockett’s execution Tuesday night was halted after about 20 minutes due to an issue with a vein, the Associated Press reported. Not long after Lockett was deemed unconscious from the first of three drugs, he began “writhing on the gurney,” according to the Associated Press. He was declared dead 43 minutes after the execution began.

You know what? That's sort of a clinical account. It's the "mistakes were made" version. Let's read a little more about how this went down.

The drugs were midazolam, which causes unconsciousness; vecuronium bromide, which stops respiration; and potassium chloride, which stops the heart. They are administered in that order. The state has said the procedure is meant to involve three doctors with hand-held syringes, injecting the drugs into IV lines in both the inmate's arms.

At 6:33 p.m., 10 minutes after the execution began, a doctor said Lockett was unconscious. But three minutes later, Lockett began to nod and mumble and writhe, witnesses said. [...]

A spokesman for the Oklahoma Department of Corrections [...] confirmed to the Los Angeles Times that Lockett did not die immediately after the lethal injection was administered.

“The director did say that it appears that a vein [in Lockett's body] blew up or exploded, it collapsed, and the drugs were not getting into the system like they were supposed to,” spokesman Jerry Massie said.

Massie said that after the new injection was administered, the condemned man “was obviously showing some movement.”

"After several minutes, five minutes, he was not unconscious,” Massie said. “They made a decision to halt the execution, but at 7:06 he suffered a massive heart attack and expired.”

See? Honestly, what can we say except things like "I feel sick to my stomach" and "I am ashamed to live in America, a place that still does this to people" -- both of which were things we actually said last night. Let's take refuge in a little background lawsplaining for a bit.

One of the major reasons that we are currently treating inmates like guinea pigs is that the anti-death penalty movement has actually been remarkably successful in using good old capitalism to make killing harder.

Each time a state has found a new source for a drug to use in executions, Reprieve, an anti-death penalty organization based in London, in collaboration with death penalty lawyers in the United States, has used freedom of information laws, the local news media and the powers of persuasion to compel the drug's manufacturer to cut off the supply.

However, because some people are terrible people who deserve no redemption in this life or the next (looking at you, Oklahoma Governor Mary Fallin) some states like Oklahoma responded to this by passing laws that explicitly said the names of the manufacturers of the drugs had to be kept secret to insulate them from any economic pressure and to ensure the state got to go on killing without interruption. This led to lawsuits by inmates -- including Clayton Lockett -- pointing out that sentencing someone to die by a means that was largely undiscoverable and had no safety or inspection controls built in whatsoever might actually be cruel and unusual punishment, which is a thing that we theoretically prohibit in America, even for people receiving the death penalty. And for people that want to show up and say things like "he got what he deserved because he did far worse blah blah blah" we will say to you "fuck you, read the goddamn constitution, because we are obliged, even if we choose to kill people, not to do so in a cruel and unusual fashion, because if we take that away we're basically Idi Amin, assholes."

Where were we? Oh, yeah, so the drug cocktail that was set to be pumped into Lockett's veins was a complete fucking mystery, quality-control wise.

In March, Oklahoma [...] said it would instead use one of five possible drug combinations, including a two-drug cocktail of midazolam (a sedative) and hydromorphone (a pain killer). When states first proposed using those drugs in lethal injection mixes last year, defense lawyers and medical experts warned that inmates receiving them would essentially suffocate to death. Brushing aside these concerns, in January Ohio used the drugs to execute Dennis McGuire, who gasped and convulsed horribly for more than 10 minutes before taking a record 26 minutes to die. [...]

Oklahoma has since shifted course again and announced that it would use a three-drug combo that includes midazolam and pancuronium bromide. According to Madeline Cohen, an assistant federal public defender representing Charles Warner, the state claims that both drugs are being purchased from manufacturers rather than compounding pharmacies but wouldn't provide any other information. The only known use of this drug combination for executions was in Florida in 2013, but Florida used five times the dose of midazolam that Oklahoma plans to use, meaning Lockett and Warner will essentially be human guinea pigs.

For a wee bit, based on this argument, the Supreme Court of Oklahoma stayed the execution of Lockett and another inmate scheduled to die yesterday, Charles Warner, while Fallin and the state GOP huffed and puffed and threatened to impeach the judges or just order the executions anyway. Then the OK Supremes abruptly reversed course and decided that the Mystery Death Injection was totally cool, so let's go ahead.

Except it was not totally cool because of the whole part where it DID NOT WORK RIGHT and Lockett lived an agonizing 43 minutes after they started pushing the stuff into his veins. And we don't actually know how he exactly died, because he suffered a massive heart attack, which could have been brought on from one of the three drugs, all of the drugs, one of the drugs coming from a batch of tainted or fucked-up drugs or many more depressing possibilities.

Look, America. We're better than this. We've got to be better than this. We are not a people that should kill people in any state-sanctioned fashion (yes, drones too, please do not hijack the comments to talk about drones goddammit) and if we are awful enough to choose to do so, we really are obliged to do so in a fashion that doesn't make them die of a heart attack only after an agonizing three quarters of an hour.

Here is Robert Patton, Oklahoma corrections chief, talking about the botched execution. Look at his face.

Justice Harry Blackmun who was as good, and as flawed, a human being as ever sat on the United States Supreme Court bench, was a death penalty supporter for most of his career, until he just couldn't take it anymore. Couldn't take the uncertainties inherent in the system, couldn't be responsible for the arbitrary infliction of death, couldn't couldn't could not.

From this day forward, I no longer shall tinker with the machinery of death. For more than 20 years I have endeavored--indeed, I have struggled--along with a majority of this Court, to develop procedural and substantive rules that would lend more than the mere appearance of fairness to the death penalty endeavor. Rather than continue to coddle the Court's delusion that the desired level of fairness has been achieved and the need for regulation eviscerated, I feel morally and intellectually obligated simply to concede that the death penalty experiment has failed. It is virtually self evident to me now that no combination of procedural rules or substantive regulations ever can save the death penalty from its inherent constitutional deficiencies. [...] The problem is that the inevitability of factual, legal, and moral error gives us a system that we know must wrongly kill some defendants, a system that fails to deliver the fair, consistent, and reliable sentences of death required by the Constitution.

From this day forward, let us all tinker with the machinery of death no more. Please.