There's A Secret Train Station Under The Waldorf-Astoria, And Rachel Maddow Loves It (Video) 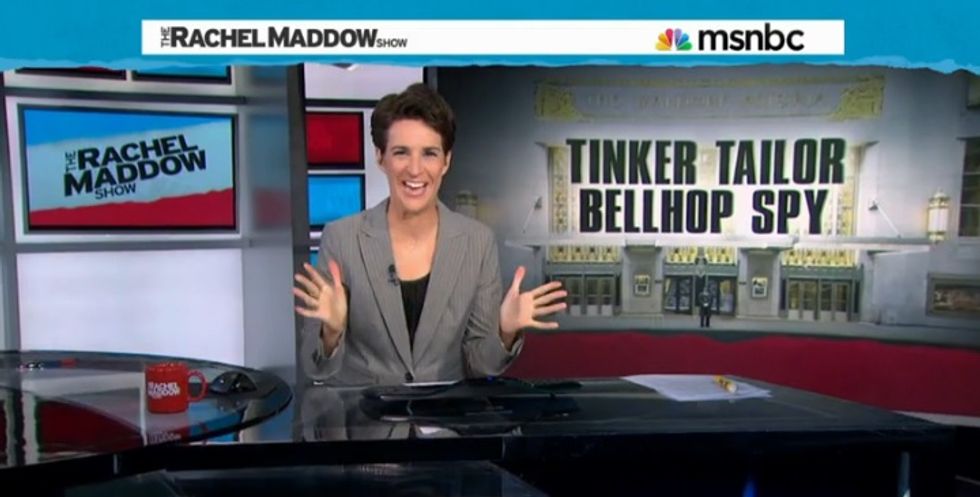 Rachel Maddow loves this story so much she can hardly stand it. Just before the Crash of 1929, a "last bit of Gilded Age Amazement" was announced in the New York Times: The then-new Waldorf-Astoria hotel would include its very own underground rail siding, where the filthy rich could arrive in their private railroad cars and be escorted directly to a special elevator to their suites.

Over the years, the 1 percent abandoned private railroad cars for private jets, but the rail line under the Waldorf-Astoria remained, and Track 61 was used almost exclusively by U.S. presidents saying at the hotel. Franklin Roosevelt liked it for the privacy because no one could see him being carried from train to wheelchair. And after 9/11, when George Bush stayed at the hotel during the UN General Assembly in 2003, the Secret Service kept a train parked there on standby in case there was another terrorist attack, and the president and his pet goat needed to be whisked away to safety. The Waldorf is also home to the US ambassador to the UN. As one of the perks of the job, the ambassador gets a year-round suite there, but presumably no private rail car.

But now there's a national security issue. The Waldorf has been bought by a Chinese insurance company, and the State Department is worried that an upcoming renovation of the hotel may be used as a chance to install bugs, bringing to mind the case of the U.S. Embassy in Moscow in the 1980s, when the half-finished building, built by Russian contractors, was so full of listening and surveillance devices that construction was stopped in 1985 and it sat empty for years. What happens next? As Rachel likes to say, watch this space.