These Baby Octopussies Will Make You Forget All About Our Climate Change Crisis, In This Week's Sci-Blog! 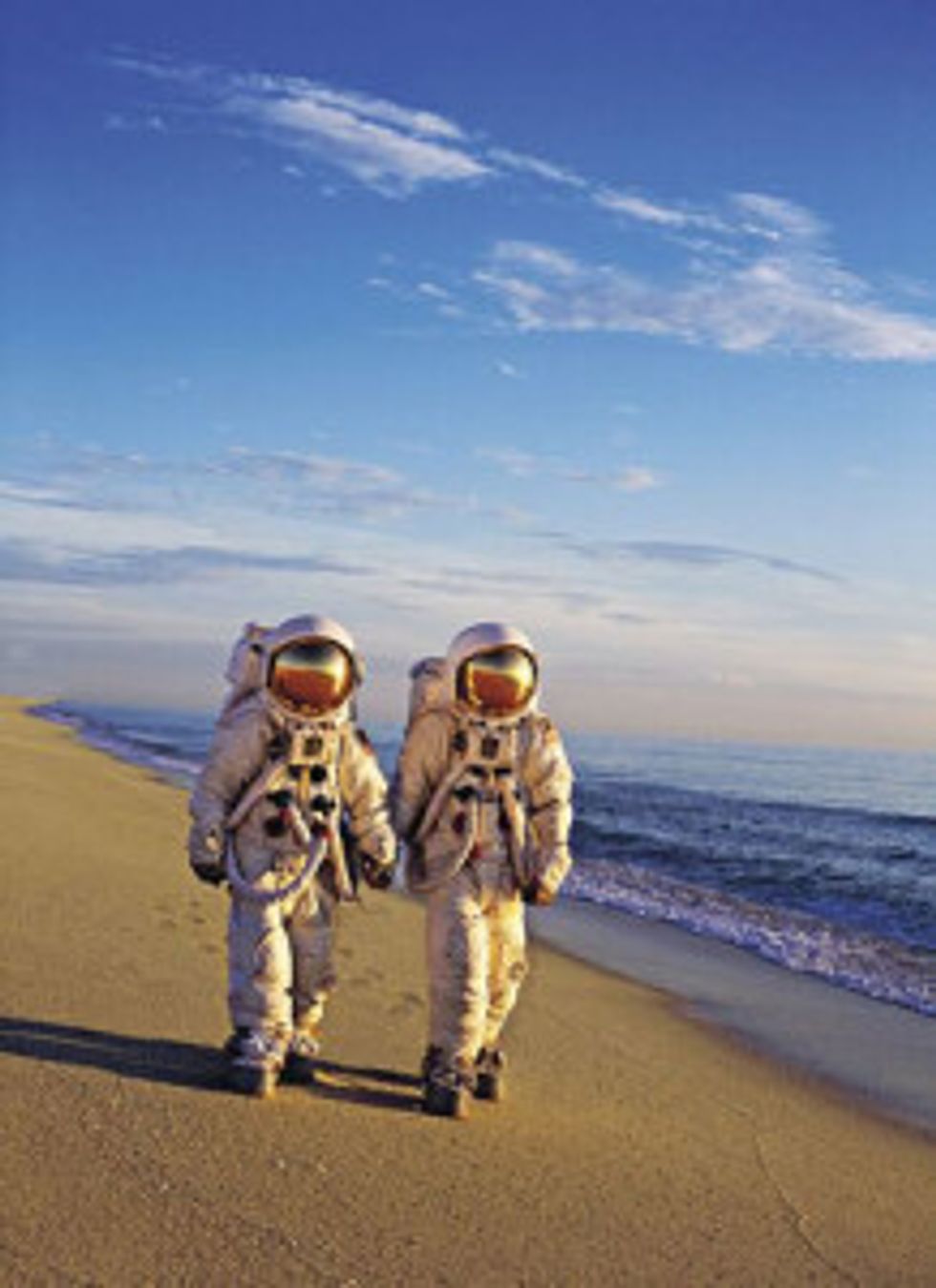 Here we go again with another appalling Wonkette Sci-Blog. Fix yourselves a Brain Stimulating Beverage and come on in.

Earlier this year, scientists affiliated with five American universities released a study titled "An attack on science? Media use, trust in scientists, and perceptions of global warming." The researchers surveyed a representative sub-sample of U.S. media consumers, in 2008 and 2012, about their belief (or lack thereof) in global warming and the types of media they preferred. In addition, they categorized coverage of Anthropogenic Global Warming (AGW, or "climate change") among all the major media sites, from CNN to Fox to MSNBC to the Wall Street Journal and New York Times. What they found -- no surprises here -- is that there's a strong positive correlation with exposure to "conservative media" and climate change denial. It's not exactly Hot News that people who watch Fox or listen to Limbaugh exclusively are the biggest skeptics of global warming -- read the comments in any AGW story on Yahoo or Fox, or listen to the average caller on CSPAN's Washington Journal -- if you dare. The real news here is the lengths to which right wing media go to create doubt and craft controversy over years of internationally published scientific findings that have survived skeptical peer review, data validation and experimental verification and all lead to the conclusion that's accepted by 98% of all the climate science professionals worldwide.

The methods that organs like Fox use to achieve this goal are well established and finely honed: Highlight minor conflicts in published studies to claim there's a lack of scientific consensus, have paid  flacks from fossil fuel industry-funded think tanks appear uncredited as "Climate Experts," and run far more stories designed to disprove rather than prove global warming. If this sounds much like the strategy that the tobacco companies used to block regulatory actions and limit their liability in cancer suits, that's because it is. Go pick up Merchants of Doubt, and you'll see that it's pretty much the same nefarious libertarian cast of characters from the Tobacco Wars who are behind AGW denialism. Cold War era spooks used to call this kind of domestic propaganda operation The Mighty Wurlitzer, and it's no coincidence that Roger Ailes was a media fixer for the criminal Nixon Administration.

The other shoe that drops in the study is this: regular consumers of conservative media experience a dramatic decline in the level of trust they place in scientists. Previous studies have found that trust in scientists among the public is key to being able to accept the facts of global warming. The exact opposite effect -- greater trust in scientists -- was seen in people who watched what were designated "liberal" outlets -- CNN and MSNBC for example. The authors state that the sustained right wing war on "climate change" has “served to marginalize scientists in general and climate scientists in particular.” Probably the most egregious example is Mark Steyn's disgraceful post in National Review Online comparing Dr. Michael E. Mann, the Director of the Earth System Science Center, to a serial child molester! Dr. Mann is taking those bastards to court for defamation of character and should win, especially as Steyn has accused him of fraudulently altering his data -- just about the worst accusation you could make about a scientist. Getting a peek behind the curtain at NRO during the discovery phase of this trial should be entertaining, indeed.

If this "lack of trust" phenomenon were limited to climate scientists it would be bad enough. There's a heavy element of political tribalism in folks who watch Fox "News" for instance and, once you accept the opinions of angry, mal-informed jackasses over learned professionals' facts then there's little mechanism left in place to stop it. Witness the widespread conviction on the right that Nobel-winning economists Krugman and Stiglitz are in reality foolish hacks, Al Gore claimed he "invented the Internet," Louis Gohmert isn't a blithering idiot, that sending money to The Man in the Brown Suit can purchase you a place in Heaven, and that Atlas Shrugged isn't a monumental pile of B-movie word guano written by a psychotic Russian speed freak.

Tempting as it is to mock a group of people who reject significant elements of modern science from the Enlightenment on up in favor of a laughably lightweight and failure ridden political philosophy, don't. After 20 years of propaganda immersion they really believe all this hogwash, they've taken over one of the two major political parties in the U.S. and they've gerrymandered themselves into districts where they routinely elect legislators whose understanding of modern science at least as bad as -- or worse than -- their own. They elected George W. Bush as President. After they knew all about him.

AGW is real. Our world is changing. 2012 was one of the 10 warmest years on record. Arctic sea ice is disappearing at an unprecedented pace. Heat waves have created havoc in Europe, Australia and the US West. Torrential rainfall has caused catastrophic levels of flooding every year and massive 100-year storms are showing up every other year. Stock investors have accepted this, as well as insurance companies and are adjusting their plans accordingly.

Our civilization is entering a critical time in history. At a time when we need to make important, complex, evidence-based decisions, it wuld be nice to have a well-informed electorate and clear-eyed lawmakers, but instead we have a reflexively partisan voting bloc supporting a senator who makes up his own facts and believes AGW is the "greatest hoax ever perpetrated on the American people", a congressman and member of the House Science Committee who thinks that evolution, the big bang theory and embryology are "Lies from the Pit of Hell" and a congresswoman and member of the House Intelligence Committee who makes up her own science about vaccines.

I'm not a fan of dystopian fiction, as a rule. I do have a few favorites, though and they invariably stand on their own as cautionary tales. Every so often I return to Nevil Shute's excellent and powerful doomsday novel On The Beach. A particular passage, which I'll share with you, has stuck with me and still seems eerily appropriate after all these years:

"Newspapers," he said. "You could have done something with newspapers. We didn't do it. No nation did, because we were all too silly. We liked our newspapers with pictures of beach girls and headlines about cases of indecent assault, and no government was wise enough to stop us from having them that way. But something might have been done with newspapers, if we'd been wise enough."

She did not fully comprehend his reasoning. "I'm glad we haven't got newspapers now," she said. "It's been much nicer without them."

Yes. And if we're not careful, too silly and not wise enough we'll soon be the ones On The Beach.

Ok, that's that. For the rest of the post, we'll be putting away the rest of our awful, depressing items and will only be doing Nice Stories.

August's answer to the 4th of July is the Perseid meteor shower and it's set to peak this weekend. So, Go Forth and Skywatch.

Comet ISON, which may very well turn out to be the most impressive comet of the century, will be tracked closely by a veritable army of ground and space based telescopes and space probes. Photo imagery will be available throughout the comet's passage and will be amazing.

OMG! the Sun's magnetic field is about so UNDERGO COMPLETE REVERSAL!!1! You probably won't notice anything as this is a normal part of the 11-year solar cycle and happens, well, every 11 years.

This just in: Adam and Eve were real and they most probably never met.

Here is the reason you all read the Wonkette Sci Blog: the Male Japanese quail (Coturnix japonica) can use their sex organs to whip up a meringue-like foam.

Now didn't that make your day?

In Important Cephalopod News, The Washington Fish and Wildlife Commission on Friday extended protections for giant Pacific octopuses in Puget Sound by prohibiting the recreational harvest of the species at seven popular scuba diving sites. This after a thoughtless and disgraceful "taking" of an Octopus by two divers. Guess who's going to have a terrible time when the Cephalopocalypse comes? A grateful Hat Tip to Weejee! See, we do pay attention to the Tipline.

Today in Very Cool Things: Scientists in South Korea are developing a Giant Crab Robot that will explore the ocean floor.

Needless to say, I Want one of these.

A huge 15 million year old skull of an extinct type of baleen whale was found on the banks of the Potomac river at Stratford Hall, Virginia. Stratford Hall is the ancestral home of Confederate General Robert E. Lee, which seems somehow significant.

Lastly, what would the Wonkette Sci-Blog be without your Cephalopod Video of the day: