These Dudes Can't Wait To Pee Next To Your Wife 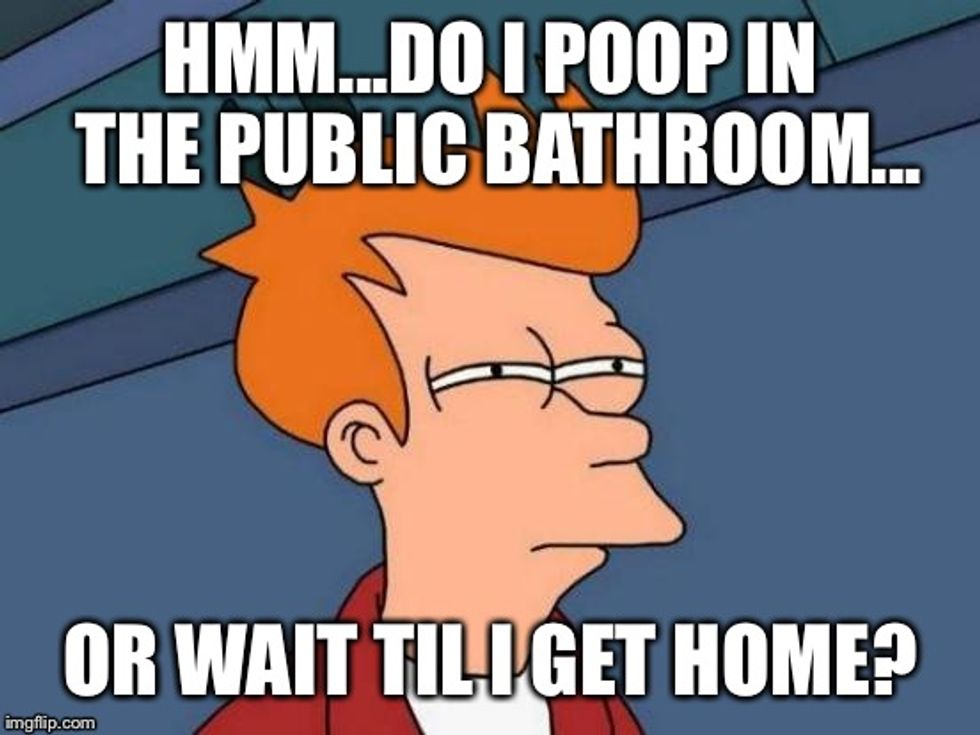 What trans people think EVERY TIME THESE DAYS.

Every time Wonkette wakes up in the morning, we hear another terrible story about how a bearded man put on a dress so he could pretend to be a beautiful lady and go into the ladies' room to put Maybelline on his penis while he grunts in a sexual manner at the REAL ladies in the ladies' room. Then we immediately realize that oh fuck, we have awakened inside one of that "Duck Dynasty" dude's Ambien dreams again, and we slap ourselves on the face until we are awake for real.

Because ACTUALLY, there is a phenomenon of dudes having to use ladies' rooms, but it's not what you're thinking, maybe! Did you ever think about how, when states pass discriminatory bills forcing transgenders to use bathrooms that correspond with the jiggly bits they were born with, that means trans-MEN, who have beards and nipple hair and deep voices and probably listen to a lot of Steely Dan, are being told they have to use the same potty as good Christian housewives?

A coupla gay-mo-gender organizations, along with a couple transmen and a lesbian, have filed a federal lawsuit against the state of North Carolina, in the wake of the insane anti-gay, anti-trans discrimination bill the state legislature called a special emergency session (at a taxpayer cost of $42,000!) to pass. It's about how for real, trans dudes do not want to stand up to pee next to your wife:

“By singling out LGBT people for disfavored treatment and explicitly writing discrimination against transgender people into state law, H.B. 2 violates the most basic guarantees of equal treatment and the U.S. Constitution,” the lawsuit argues.

FOR EXAMPLE, Joaquín Carcaño, one of the transman plaintiffs, sometimes has to do potty, like other common humans do. These are the consequences of the law, for him:

For the record, we scoured the lawsuit, and the other transdude plaintiff, Payton Grey McGarry, also expresses no burning desire to go pee with YOUR WIFE AND DAUGHTERS. In fact, the suit says the idea causes him to "experience significant anxiety as he knows that it would be distressing for him and uncomfortable for others." Gosh, it's almost like trans people aren't the monstrous predators the religious Right makes them out to be. So weird, since the religious Right isn't known for being dishonest, oh wait yes it is. (Speaking of dishonest, you should check out North Carolina Gov. Pat McCrory's latest butthurt statement on how people are being mean to his state right now. SO butthurt. SO lying a lot.)

These plaintiffs aren't the only ones pointing out that under this law, dudes ACTUALLY are going to have to pinch loaves next to YOUR WIFE AND DAUGHTERS. Want to look at some hilarious pictures from the Twitter, and then we'll call this post SO over?

GET IT? THAT'S A MAN. And North Carolina Republicans just shoved him into the ladies' room!