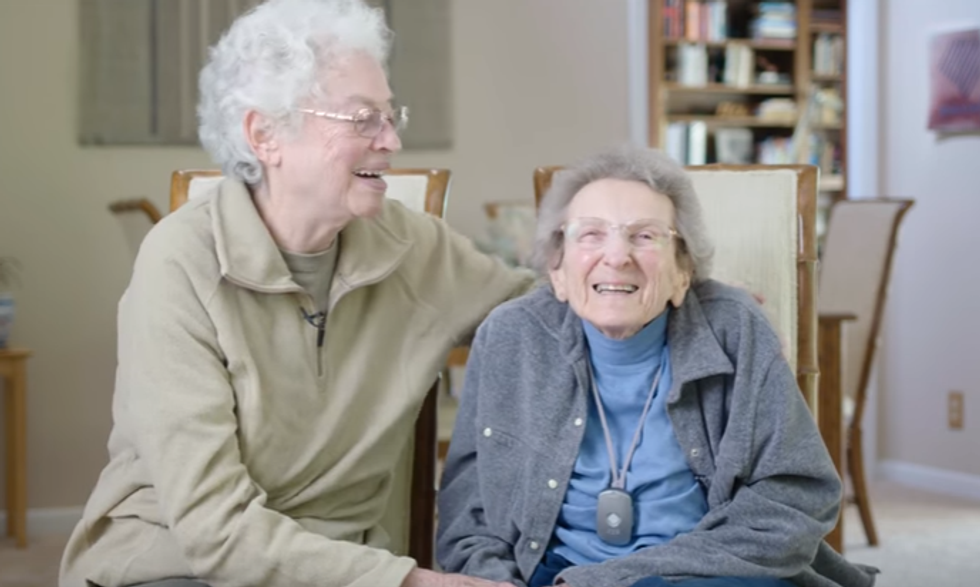 How about a nice, happy story for your Wednesday morning? We'd like to introduce you to Lennie Gerber and Pearl Berlin. They are kick-ass old lesbians who love each other very much! In fact, they have been together for 50 years, and have lived to see marriage equality legalized nationwide, even in their home state of North Carolina. However, as they note, they've also lived to see the more recent passage of the insanely anti-LGBT North Carolina H.B. 2 law, otherwise known as the "North Carolina Republicans Need To Inspect Your Junk Before You Pee" law.

Here is why they personally are voting for Hillary Clinton:

In the next video, they talk about about how much they love North Carolina, how they were part of the lawsuit that overturned the state's ban on marriage equality, and how they finally got to say "I do!" in their OWN community. Talking about the H.B. 2 law, they're not about to brook any nonsense about people not voting, because, as Lennie notes, "Every single vote counts!" She adds:

And you can't say my vote doesn't count, you know. It does! And sometimes your elections are very close! So you have to go out and get your friends registered and you get registered, and you have to make the effort to go to the polls and vote.

They don't say it outright, but we bet Lennie and Pearl would REALLY love to see that butthurt moron Gov. Pat McCrory, who's been at the forefront of letting H.B. 2 utterly ruin his state, lose to sexxxy Democratic North Carolina Attorney General Roy Cooper here in a couple weeks. It's a close race!

These videos were all published by the Human Rights Campaign, and because you literally cannot get enough of these two amazing women, you will now watch this video the HRC released in 2014, after Lennie and Pearl's marriage was finally recognized in North Carolina. At this point, they had been together for 48 years, and had just celebrated ONE YEAR MARRIED.

Oh sorry, you are now dead, because you have died of the sweetness and wonderfulness that is Lennie and Pearl. As soon as you come back to life, we guess you'd better take your ass down to the polls to vote for Hillz, OR ELSE.

Or else what? We dunno, we just like to say OR ELSE, all menacing-like. Do it for Lennie and Pearl!