This Alabama Dad Is The Hero We Wish We Didn't Need 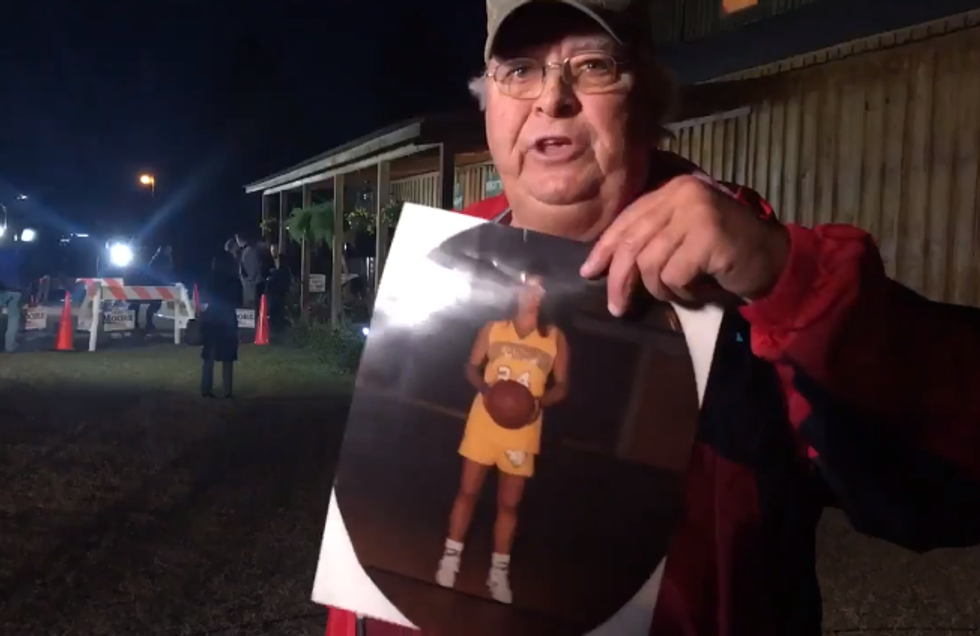 WARNING: If you have not seen this video yet, it might make you cry. And if you cry, that will be a sure signal that you are a better human being than every grunting beef shart who casts a vote for Roy Moore today in Alabama's special US Senate election.

In this video, you will meet Nathan Mathis, a peanut farmer from southern Alabama. Mr. Mathis is just about as country Alabama as it gets, and he seems like a pretty conservative gentleman. But he didn't show up at Monday night's Roy Moore rally to clap his hands when Kayla Moore said she had once palled around with a known Hebrew. He didn't come to be reassured by Roy Moore's Vietnam pal's moving story of That Time Roy Moore Coulda Fucked Some Kids But Refrained. Mathis came to stand outside and deliver a message about his daughter Patti Sue Mathis, who died in 1995 when she took her own life because she couldn't deal with the fact she was a lesbian:

Father, who says he's a local peanut farmer in Wicksburg, outside Roy Moore rally talks about losing his gay daughter at age of 23 to suicide. "I was anti-gay myself. I said bad things to my daughter, which I regret." pic.twitter.com/J0oOU0EJI2

"Judge Roy Moore called my daughter Patti Sue Mathis a pervert because she was gay," the sign read. "A 32-year-old Roy Moore dated teenage girls ages 14 to 17. So that makes him a pervert of the worst kind. Please don't vote for Roy Moore!"

My name is Nathan Mathis. My daughter was Patti Sue Mathis. That's her right there. [pointing to picture] Judge Roy Moore called her a pervert for one reason, because she was gay.

Roy Moore has spent his entire life hurting gay people, or at least the parts of his life he wasn't busy molesting little girls, ALLEGEDLY WE GUESS.

If he called her a pervert, he called your child a pervert if she was gay, or if your son was gay. This is something people need to stop and think about. ... How was my daughter a pervert just because she was gay? Does it mean she was born gay? I don't know the answer to that, but she was gay.

Mr. Mathis added that he's a man of faith, and when a reporter asked him what he wanted to accomplish by standing outside that rally, here was his reply:

I don't know what I'll accomplish. I really don't. I had mixed emotions about coming, but somebody needs to speak up. And if it's all to no avail, so bet it. It won't be the first time I've done something to no avail, OK?

Mr. Mathis was there to say his daughter ended up taking her own life because of hateful messages like those spouted by Roy Moore. Messages he used to believe in himself:

I was anti-gay, myself. I said bad things to my daughter, myself, which I regret. But I can't take back what happened to my daughter. But stuff like saying my daughter's a pervert, I'm sure that bothered her. Now, you know Judge Moore ... he didn't call my daughter by name. He said all gay people are perverts. Abominations. That's not true. We don't need a person like that representing us in Washington. That's why I'm here.

A dad who suffered something we wouldn't wish on our worst enemy, the loss of his daughter, Patti Sue, and for such a terrible, stupid reason. And he knows his own earlier lack of understanding contributed to what happened to his daughter. And he's standing out there, warning folks that their words hurt people. Their actions hurt people. Some of the people they're hurting are their own children. (FACT.)

Mr. Mathis knows that now, and he wishes he hadn't had to learn it in such an awful damned way.

Now, lest Alabama Roy Moore supporters think George Soros hired Fusion GPS to take a secret message to the Washington Post so they could pay Mr. Mathis one million Obama Bucks to make up this story to hurt the candidacy of True and Perfect Roy Moore, that's just not true. Mr. Mathis wrote a letter to the newspaper in Dothan, Alabama, in 2012, about his daughter's story, and it will break your heart. We're going to reproduce it in full, because that's how much we want you to read it:

With election time just around the corner, and watching and reading the news, “gay bashing” has begun again.

On Oct. 11, 1972, Sue and I were blessed to have a baby girl, which we named Patti Sue Mathis. Patti was a wonderful child – happy, treated other children as she should, regardless of wealth or color, very athletic, tomboyish (I always had to pitch batting practice to her after Dixie Youth practice), very beautiful and smart. Patti may hold the scoring title at Wicksburg in basketball for girls. I’m not sure, but her points-per-game average was high. She was selected as the most valuable player at Enterprise State Junior College in softball.

When Patti was a senior at Wicksburg High, I found out she was gay from a young friend she had told. I confronted Patti and I said some things to her that still eat on me to this day. I told her I was sorry that I said those mean things to her.

Patti moved out, but came back home approximately four months later and sat down and cried and said, “Daddy, I don’t want to be gay. Will you please get me some help?” I told her that I sure would and I called UAB hospital and made an appointment.

Patti had been raised by going to church at Christian Home Church of Christ, and she was there almost every time the door was open. Patti knew the story of Sodom, for oftentimes gay bashing was preached from the pulpit. Looking back now, I wonder how Patti must have felt, or if she even knew she was gay then. I never asked her.

We went with Patti to UAB and all types of blood work and tests were done on her that day. Finally, on over in the afternoon, the doctor called Patti, Sue and me into his office and he told Patti, “Young lady, you can’t help the way you are. There is nothing we can do for you.” I said to myself, “Man, this doctor is crazy.”

We visited other doctors and psychiatrists and Patti was told the same thing: “You can’t help the way you are.”

On March 22, 1995, Patti took her own life because she didn’t want to be gay anymore. She was tired of being ridiculed and made fun of. She was tired of seeing how a lot of people treat gay people. I found Patti that day.

Sometime after Patti died, I attended church and a visiting preacher was preaching. About 10 minutes into the sermon, he bashed gays the rest of the way. As soon as the invitation song was given, I went out the door with one of the worst headaches I had ever had. I was ashamed of myself for sitting there and not defending Patti. I have not been much since.

I have a hard time believing that God would allow Patti to be born as she was and if the doctors and psychiatrists were correct that “she could not help the way she was,” that Patti was going to bust hell wide open. I asked a local doctor recently if the medical profession had found a cure for being gay and he said, “No.” He changed the subject after that.

I have no quarrel with any letter writers or readers on this subject. Believe what you want to. I only know that if you ever have a child or grandchild who is gay, you’ll think differently.

Whatever happened to “We hold these truths to be self-evident, that all men are created equal, that they are endowed by their creator with certain unalienable rights; that among these are life, liberty and the pursuit of happiness.” Does that exclude gays?

May God have mercy on us all. I only know I miss my daughter Patti very much and I am grateful for having her as my daughter.

Don't make fun of how Nathan Mathis took Patti Sue to the hospital to see if they could cure her of The Gay. That's not the point. He didn't know better, and hell, this was before Ellen came out on national TV -- Patti Sue didn't know better either. And Mr. Mathis has to live with that, for the both of them.

There has to be room for redemption. And if anyone is atoning, it's him.

LGBT kids from Alabama and elsewhere have been bullied, driven to depression, and even taken their own lives over the years because of the kinds of messages Roy Moore has spent his life spewing. It's still happening now.

So, Alabamian who usually votes Republican, do you want to send those kids a message that they are loved, no matter who they are, and that people who call them "perverts" and "abominations" are liars? Do you want the kids in YOUR TOWN, in YOUR CHURCH and in YOUR NEIGHBORHOOD to know their lives are valuable?

THEN GET OVER YOUR SHIT AND VOTE FOR THE DEMOCRAT THIS TIME, OH MY GOD, IT IS NOT THAT DIFFICULT.