This Dude Is The Dumbest Trump Campaign Surrogate Of All, And That's Sayin' Something! 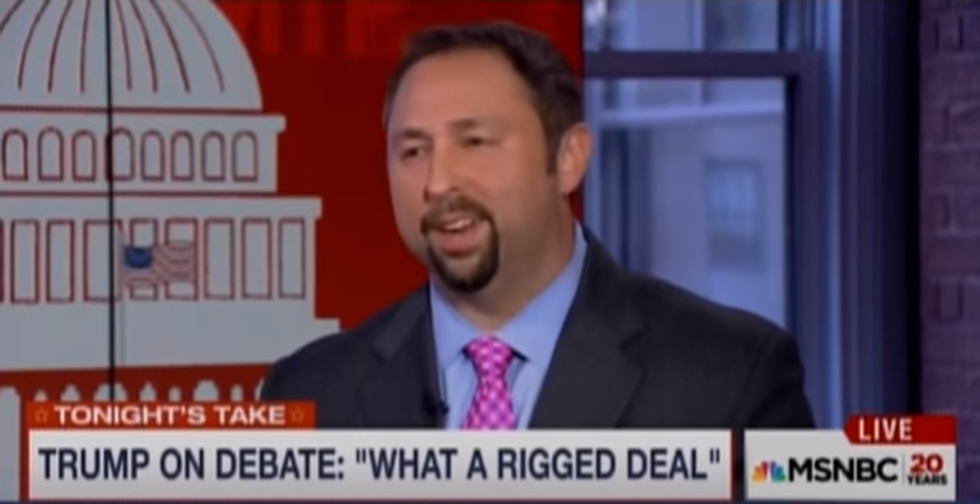 He grins because he is brainwashed!

We need to tell you something you might be skeptical of, along the lines of "I saw a unicorn faking the moon landing." CHUCK TODD DID ACTUAL JOURNALISM. Honest! You see, Chuckington The Clown was hosting Jason Miller, communications adviser for the Trump campaign, and they talked about the polls taken after the debate -- the scientific ones with actual methodology, and the stupid fake online ones the Trump campaign likes. Miller insists that those fake polls are truly, madly and deeply BETTER and MORE ACCURATE than scientific polls, and even Chuck Todd can't say silent in the face of such fucknozzle-ry. They also talked about Trump's debate performance itself, which Miller says was flawless, no room for improvement, heil Trump! and all that rigamarole.

[wonkbar]<a href="http://wonkette.com/607009/awwww-somebody-says-donald-trump-won-the-debate-and-it-is-enemy-russia"></a>[/wonkbar]We're going to transcribe most of this -- and it's a LOT of transcript -- but then we ORDER you to watch the videos for yourself, because it's an interview that deserves to be seen and not just read. Watching Chuck Todd's eyes get bigger as this automaton Trump acolyte spits robotic bullshit at him at 90 miles a minute, you can almost see Todd remembering the dreams he had as a bright-eyed, bushy-tailed nubile young journalist, of being a real hard-hitting reporter who could change the world, before he grew up to be "Chuck Todd."

CHUCK TODD: Why do you think multiple polls, scientific polls, have said Hillary Clinton won that debate by a 2-1 margin? I mean, it's not even been close.

JASON MILLER: Well I have to set you straight on that one. The polls that happened that night, the night of the debate, the snap polls, the ones that happen online, those all showed Mr. Trump winning in a huge way.

MILLER: Those are immediate reactions. Those are a snapshot of what people are thinking who are actually watching the debate. Now the NBC/Survey Monkey poll, to go after that one because I figured you're probably gonna go to that one next ...

MILLER: Both Monday and Tuesday, so then Tuesday is influenced by all the debate coverage the next day which, of course, the media is going to try to hype up Hillary Clinton to make it seem like she won. Not the case at all. People who were watching thought Mr. Trump won that debate.

TODD: Where is the evidence that people who were ...

MILLER: There was Time, there was Variety ...

TODD: No, those are all like robot polling, it's not real polling!

TODD: Jason, you've been doing this a while. You know those are bogus. You know these are bogus. There is nothing -- they're beyond non-scientific. In fact ... there is some evidence that there are computer programs that help refresh. All you have to do is like empty your history and you get to vote again. They're not real, Jason!

AND NEITHER IS SANTA OR GOD, JASON! Also, watching this little sycophant repeat "Mr. Trump" over and over again, we're led to ask (for journalism) just how much this surrogate enjoys sucking Trump's tiny-handed weenus.

Todd and Miller then discussed whether, regardless of polling, Delicate Donald actually did good in the debate, or whether he was the fuck-up we all saw with our lying eyes:

TODD: Do you believe the debate preparation was adequate going into the first debate?

MILLER: I think Mr. Trump was ready. I think he'll be ready again!

TODD: Do you believe it was adequate going into the first debate?

TODD: I just don't understand why we're creating a reality that doesn't exist.

Chuck Todd is in Reality Land, where it is BOOOOORING. Jason Miller is in Imagination Land, where there are fluffy bunnies and unlimited pie and Donald Trump is good at things!

Finally, for the pièce de résistance, Todd attempted to ask the slobbering Trump stooge about a conspiracy out there, promoted by Donald Trump, that Google is SUPPRESSING THE BAD STUFF about Hillary Clinton, so she may be duly elected queen. Hey, Chuckles, got any more actual journalism in ya? (This exchange is in the second video posted above.)

TODD: I'm gonna go back to the Google thing. Do you guys have any real evidence on that?

MILLER: Well there was an article on that over the summer.

TODD: A Russian news agency that started this???

MILLER: There's an article on Breitbart.

TODD: OK, but do you have evidence on this?

MILLER: There was an article on Breitbart on that early in the summer.

TODD: DOES THAT MAKE IT TRUE?

MILLER: I mean, it's definitely raised the issue. Of course!

TODD: But there's "raising the issue" if it's true, do you have evidence beyond the report that claims this? Did you guys do your own study on this?

MILLER: Didn't do our own study, but it's a report that's out in the public. ...

TODD: Just because something is out there doesn't mean it's truthful.

The way Jason Miller sputtered "Breitbart" over and over again, it was clear his battery, which gives him the fuel to fellate Mr. Trump with glazed-over eyes all the livelong day, was running out of juice, so he went back to Trump Tower so they could plug him into the wall overnight. The end.