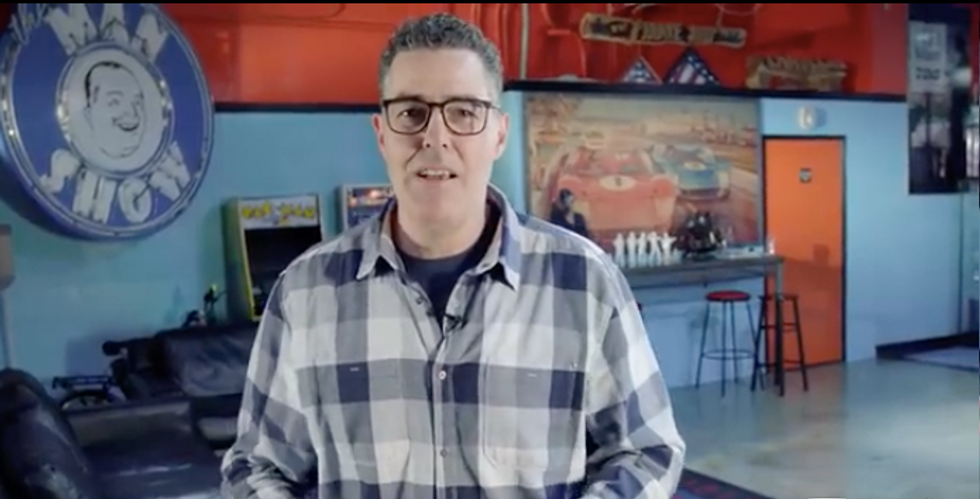 Tim Allen is joining forces with fellow old white dudes Adam Carolla and Dennis Prager in a new documentary all about how all the young whippersnappers are bad, and colleges are bad, and conservatives aren't even allowed to have opinions anymore. It is titled "No Safe Spaces," because of course it is.

Allen is clearly still reeling over having his television show canceled by liberals who mostly didn't even know the show existed in the first place. Now he is going to take his fight to the big screen.

The documentary, expected to hit movie theaters this fall, will be all about how freedom of speech is being murdered on campuses by students high on political correctness.

Fellow comedian Adam Carolla and conservative radio show host Dennis Prager are making the movie to promote free speech at a time they say the entertainment industry, media and college campuses too often shut down or blackball controversial viewpoints.

“Nothing kills comedy quite like people who are constantly offended,” Carolla told the Post. “It’s impossible to be funny if we’re not allowed to poke fun at each other and that’s what’s happening with a new generation of people who seem to be offended for a living.

“If we can’t have fun with one another than we lose our humanity. If free speech goes, then our basic freedoms will follow soon after.”

Oh wow, those are some really good points. Do you think they do a deep dive into why it is perfectly acceptable for conservatives to be offended, but not acceptable for liberals to be offended, or nah? Like, why is it okay for Dennis Prager, who claims that the “contemporary left is the greatest threat to free speech in American history,” to be super offended by Keith Ellison being sworn into Congress with a Quran instead of a Bible? Or by gay people getting married? I would sure like to know the answer to that. What about when conservatives complain about comedy they don't like? Because that also seems like a thing that happens pretty often.

Is that a threat to comedy and free speech, or is it just a person having an opinion or thinking something isn't funny? It's hard to keep track here!

Adam Carolla, by the way, is the former co-host of "The Man Show" -- a "comedy" show just for men, where they didn't have to feel judged for wanting to watch a bunch of women with large breasts jump up and down, or be told that it is maybe gross to refer to those women as "Juggies." He is also the proud owner of a "man cave" -- which is a special space that a man can go to in his house in order to do manly things and not have to deal with women.

The documentary's IndieGoGo campaign features a video of what we can expect to see.

Whoops! Wrong video! They were so similar I had trouble telling them apart. This is the real video.

The video features a fake "Utopia University" in which students can be any race they want -- which is actually very interesting given how very appalled nearly every "Social Justice Warrior" on the internet was by Rachel Dolezal. Of course, this is really more about taking a shot at transgender people, whose mere existence Carolla and and Prager are clearly very offended by. Nothing says "I sure love freedom!" like whining about how it's not fair that you don't get to tell people what gender they are.

The video also includes wistful reminiscing about how college used to be just like Animal House -- a movie featuring a scene in which a "cool guy" devil and a whiny angel debate whether or not a character ought to rape an unconscious woman. Oh man, those sure were the days.

There is also a description with the obligatory hysteria about the scourge of "snowflakes."

Come along on a road trip that will include trigger warnings, real social justice warriors, and maybe even some tailgating. Adam and Dennis will show you how so many terrible, horrible, no good, very bad ideas have ruined college for young people and now threaten to ruin the country by creating a nation of precious snowflakes who melt when they encounter an idea that they disagree with. And while the topic is serious, we can’t resist making this a funny film.

Despite the fact that these fellas (and a slew of New York Times op-eds) might have you thinking that this is all something very new and scary, it is a tale as old as time. Or at least as old as 1951. In 1951, National Review founder William F. Buckley published "God and Man at Yale" -- all about how colleges were murdering "individualism" by supposedly forcing on students liberal theories about economics and social issues rather than the views of its esteemed alumni (like himself). Moral panics about college making people "soft" and too liberal are at least as old as the existence of college itself.

Somehow they are never nearly as concerned about intellectual diversity and freedom at places like Liberty University. I wonder why that might be!

None of them are actually advocating for freedom of speech or for any kind of freedom whatsoever. If they were really the freewheelin' freedom lovers they're trying to portray themselves as, they would not give a flying shit if sexual assault survivors wanted to know if there were brutal rape scenes in a book in advance. "No skin off my back!" they'd say. They wouldn't care if sometimes marginalized people wanted to have clubs or spaces in which they didn't have to feel marginalized, and would consider that at least as legitimate as their own desire to have spaces without women. They wouldn't give a damn what gender people identify as, or who they marry or with which book they want to be sworn into Congress. All of that would come under the banner of "none of my damn business."

They are welcome to say they would prefer "trigger warnings" or "safe spaces" didn't exist, but people are also welcome to tell them to fuck off. That is what free speech actually is. It does not mean anyone has to go along with you or think you are funny.

If they were super chill, they might even realize that people's taste in comedy changes over time. Jokes that were hilarious in the 1930s might not resonate so well today. People got tired of "take my wife, please" jokes after a while.

By the 1970s, the joke "My father was a little headstrong, my mother was a little armstrong. The Headstrongs married the Armstrongs, and that's why darkies were born." was edited out of television airings of Duck Soup because it did not quite jive with the times. It is likely that even many conservatives today might not find that joke particularly hilarious or clever, and even more likely that they would not know anything about the song being referenced in it.

Comedy is still a thing! It's not in any danger. It's just adapting to the times and comics are telling jokes that are funny and relevant now, in the year 2018, rather than jokes that were funny 20 years ago. Sorry you don't get to have a show featuring a team of "Juggies" and have everyone be really cool with that, but them's the breaks. People move on.

They're not fighting for "freedom" on college campuses, they're not fighting a fight for comedy, they're fighting an existential fight against their own increasing irrelevance and inability to dictate culture and feel like they are hip and with it. That's scary, I'm sure, but it's definitely not a First Amendment issue.

You know who you could give your money to instead?