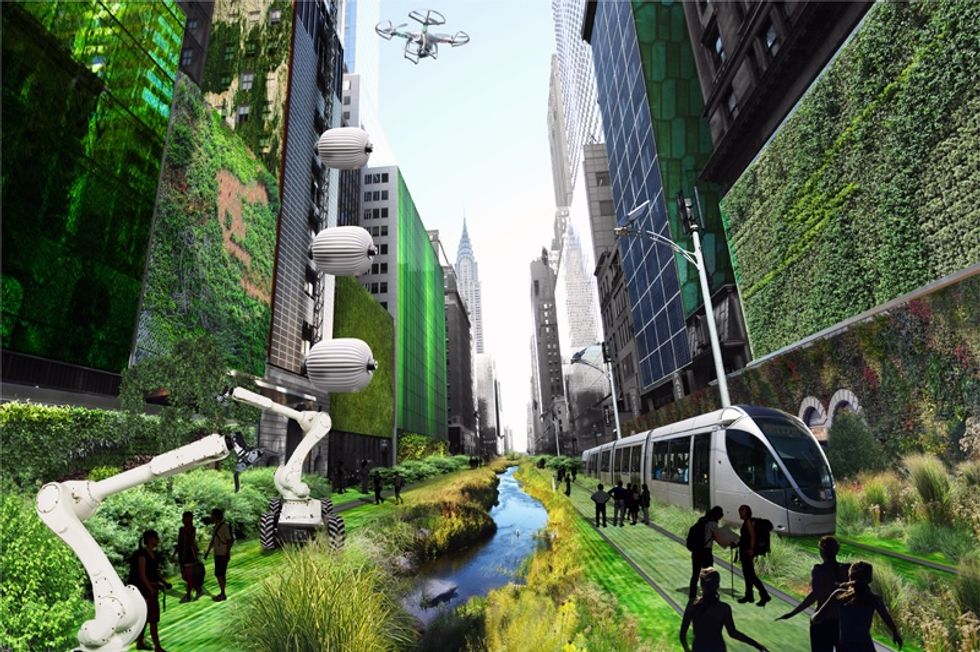 This is the future liberals want. (Image courtesy Mitchell Joachim, Terreform ONE)

Here's a little compare and contrast exercise for you! Take a look at Florida Governor Rick Scott -- no, not a direct look, you'll go blind! -- and at New York City Mayor Bill de Blasio, and try to figure out who is bigger on caring about the environment? Obviously, it oughta be the Florida guy, because for one thing, New York is 99 percent concrete and asphalt, with one percent Central Park (where they murder presidents in Shakespeare plays). Florida, on the other hand, is just reeking with nature, as Rick Scott proudly reminded us after he and the Very Existence of Mar-a-Lago convinced Ryan Zinke to promise no oil drilling off the Florida coast:

See! He's gonna protect Florida's pristine coastline, the Everglades, the state parks, and Florida's environment like a BOSS. Or like a tool of Big Agribusiness, as Carl Hiaasen likes to remind us. Scott may tweet the right words, but last year, for instance, Scott blocked efforts to reduce the acreage of sugar plantations south of Lake Okeechobee that play hell on the environment:

Nightmare algae blooms, vile and job-killing, are destined to be one of Scott's legacies. Next June, when the St. Lucie estuary again turns puke-green and the oyster beds die, the light-footed governor will be nowhere in the vicinity.

Neither will the tourists.

The blooms are caused by billions of gallons of fresh water that are pumped from Lake O during the rainy season. Loaded with phosphorus and other pollutants from surrounding areas, the lake discharges are mainlined toward both Florida coasts, bringing ruin to saltwater habitats.

Florida Sees, Hears, And Speaks No Climate Change. Also: Sinks Into The Sea

Mr. Scott, Friend of the Environment, is also the hero who in 2015 banned state employees from even uttering the words "climate change," because there's clearly no such thing. Oh, how we laughed when several state senate Democrats tormented Scott's head of emergency management by saying "climate change" right to his face and phrasing questions to try to get him to say the forbidden words.

But how about de Blasio and his concrete jungle, huh? Like he has any "environment" to even protect, apart from pigeons and rats the size of pizzas! Turns out, though, the New York mayor and other city officials are using the power of the purse to push green investments: Over the next five years, the city's pension fund -- a huge pool of $189 billion -- will divest itself of all fossil fuel stocks, shifting about $5 billion away from investments in oil companies.

And the investments are just for starters. De Blasio also announced the city will sue five oil companies -- BP, Exxon Mobil, Chevron, ConocoPhillips and Shell -- in federal court to collect damages for climate-related harm to the city, and to help pay for infrastructure needed to deal with future environmental conditions -- like maybe building boat docks to serve as the future entrances to most skyscrapers, once every street is Canal Street.

[W]e’re bringing the fight against climate change straight to the fossil fuel companies that knew about its effects and intentionally misled the public to protect their profits. As climate change continues to worsen, it’s up to the fossil fuel companies whose greed put us in this position to shoulder the cost of making New York safer and more resilient.

The lawsuit argues that New York has already experienced flooding and erosion from climate change, and that it's only right to shift the economic burden of dealing with climate change "back on to the companies that have done nearly all they could to create this existential threat."

The suit cites well-known evidence that companies like Exxon Mobil were aware of the global impact of burning fossil fuels as far back as the 1970s, but instead of taking steps to mitigate the impact of greenhouse gas emissions or reduce their output, instead poured money into fake science that downplayed or denied the reality of climate change.

De Blasio's office has called climate change "perhaps the toughest challenge New York City will face in the coming decades," pointing to the massive damage caused by superstorm Sandy in 2012 and the costs of protecting areas like lower Manhattan and the vicinity of JFK International from flooding.

After Donald Trump gave the finger to the Paris Climate Agreement last June, de Blasio signed an executive order committing the city to accelerate its own efforts to meet the Paris goals; by October, the mayor's office had released a plan to "put the city on a path to deep de-carbonization" and cut greenhouse gas emissions by more than 80 percent by 2050. Among other goals, NYC has committed to requiring new buildings to be highly energy efficient, to use its purchasing power to get all its electricity from renewables once sufficient supply is available, to include rooftop solar electricity arrays on new municipal buildings, and to increase bicycle commuting and bike lanes.

Yr Wonkette is supported by reader donations. Please click here to help us! We also partner with Arcadia Energy, which gives us a nice signing bonus for every Wonkette supporter who joins itws wind energy program and/or its solar energy program — pay your home energy bill with green energy, whether you own it, or have "sunshine" or not!