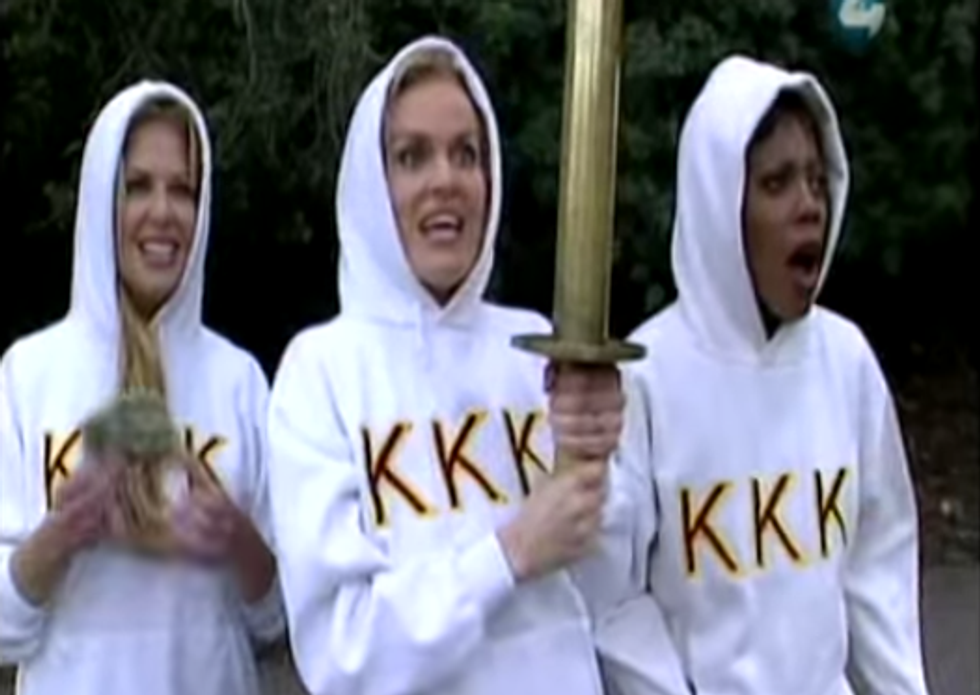 Delicious fried lard conglomerate Krispy Kreme is in trouble in the UK for a Facebook promotion issued by its Hull branch. The flyer was intended to advertise upcoming events at the local heart attack emporium, including face painting and the company's official fan club. Neat! Problem is nobody told these guys it might be a bad idea to name your official fan club the Krispy Kreme Klub, and to advertise its meeting nights as KKK Wednesdays. Presumably, the only donuts sold that night would be the vanilla ones.

After someone on the internet (who apparently is not a Moran) pointed out that the KKK is kind of a bad thing and that maybe you shouldn't blast this all over your Facebook page, the Hull branch scrubbed the advertisement from its page, went into damage control, and actually made a legitimate apology, not one of those "sorry if you were offended" nonpologies.

But never fear, Fan Klub members! According to The Guardian:

The Hull Daily Mail quoted a spokeswoman from the Hull branch of Krispy Kreme who said KKK Wednesdays would go ahead, but under a different name.

“This was sent from head office so it has been advertised at all the outlets,” the spokeswoman said.

We're not sure if that means the original ad copy came all the way from the top or if the move to push ahead with KKKlub night came from the top. Regardless, we are sure the company's purported "internal investigation" will find out exactly who was responsible for this and will totally not pin the blame on the youngest employee in their advertising department. Good luck, Intern No. 3!

The Royal Knights of the Ku Klux Klan could not be reached for comment, because of how we did not try, so no word on if they plan to sue for this egregious breach of copyright. Being associated with Krispy Kreme does not go well with their recent rebranding efforts. What we can tell you is that the official KKK website has one of the most eyeball-scarring font color pairings we have ever seen. Your Wonkette actually teared up trying to read that searing red "America, Our Nation is Under Judgement from God!" banner. Therefore, we would like to congratulate the Klan for finally leaping forward into the Geocities age of the internet. If nothing else it's progress.

Look, Krispy Kreme, we get that advertising is hard. You're trying to convince people who might not want your stuff that they absolutely must have your stuff. But in the future, it would really help if you proofread the thing you were about to blast out to however many millions of people who might see it and not take it well. If you proofread the ad and get even the tiniest inkling of "Oh hey, are we about to endorse a virulent hate group?" then maybe it's a good idea not to run the ad. Instead just go for some puppies. Everyone loves puppies, right?

[The Guardian via Wonkette tipster Weejee]