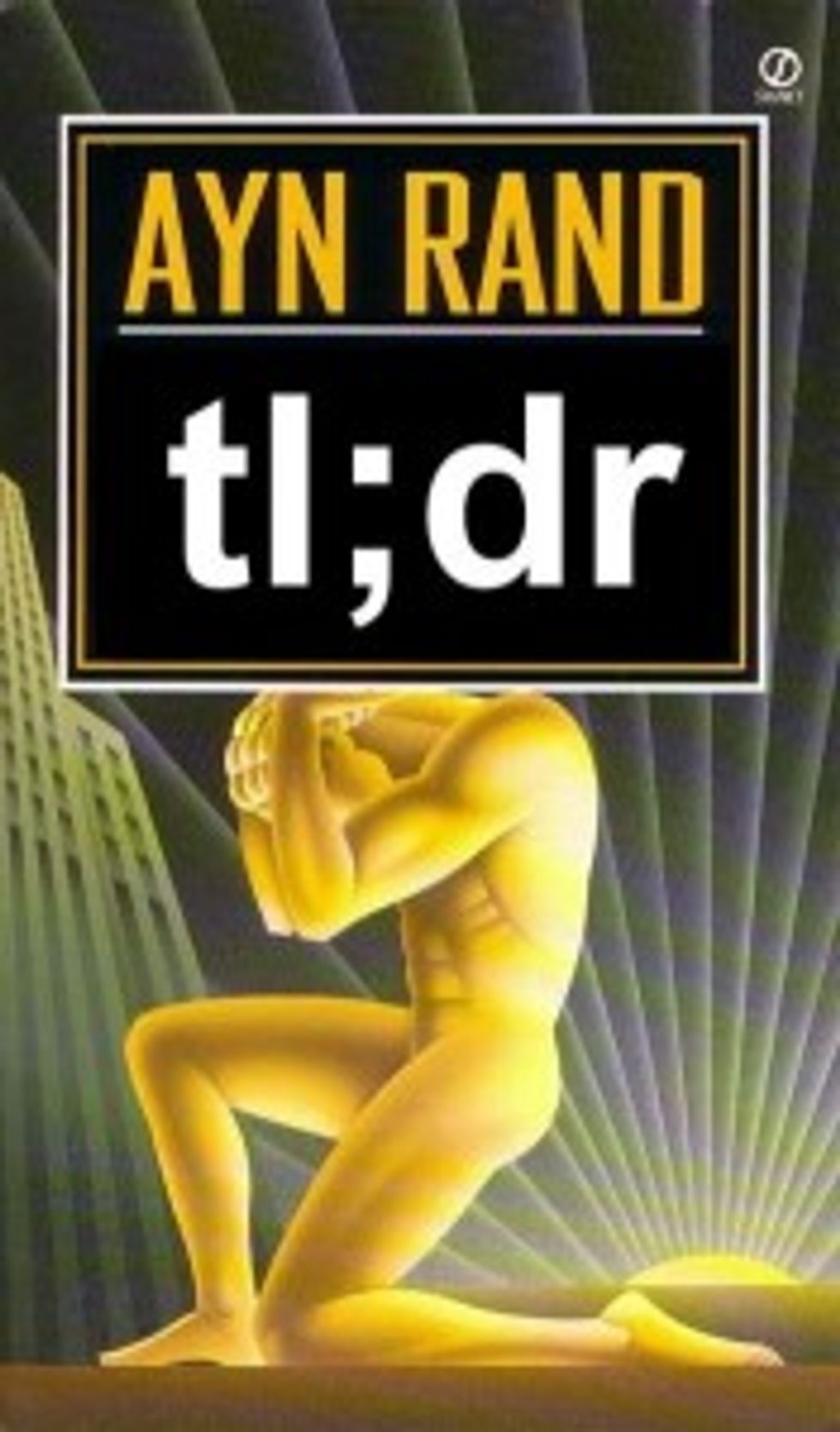 To make a point about government efficiency or something, an Idaho state senator has introduced a bill that he has no intention of actually passing. The proposal would require all Idaho high school students to read Ayn Rand'sAtlas Shrugged and pass a test on it in order to graduate. The Spokane Spokesman-Review reports that state Sen. John Goedde, who chairs the Senate Education Committee, had a perfectly objective (ha-ha!) reason for wanting all high school students to read Rand:

When Sen. Bob Nonini, R-Coeur d’Alene, asked Goedde why he chose that particular book, Goedde said to laughter, “That book made my son a Republican.”

Goedde also explained that he doesn't really intend to move the bill forward through the Senate; rather, he wanted to send a message to the State Board of Education that he was very, very displeased with the board's decision to repeal a rule requiring students to take two online classes in order to graduate.

“It was a shot over their bow just to let them know that there’s another way to adopt high school graduation requirements,” Goedde said after the meeting. “I don’t intend to schedule a hearing on it.”

Goedde, who is just a middle initial away from having a wicked cool name (we checked -- it's W, not B), responded to another senator's concern that Atlas Shrugged might be a poor choice to impose on all students by saying, “I don’t plan on moving this forward – it was a statement.” He did, however, praise the novel for its influence on his own worldview:

“When I read Atlas Shrugged, and it’s been probably 30 years since I read it, but it certainly gives one a sense of personal responsibility,” Goedde said.

Efforts to tease out whether "personal responsibility" normally includes introducing dickish bills to make a passive-aggressive "statement," or whether proposing a state mandate to read a novel about the evils of "statism" might irreparably harm kids' sense of irony, were ultimately unsuccessful. We will keep Sen. Goedde in mind for Wonkette's coveted Legislative Shitmuffin of the Year Award, but must point out that several other state legislators have already been far bigger assholes this year, so he'll need to step up his game.

Readers will be gratified to know that the very first comment on the online story quoted John Rogers' line about how there are "two novels that can change a bookish fourteen-year old's life: The Lord of the Rings and Atlas Shrugged"

One is a childish fantasy that often engenders a lifelong obsession with its unbelievable heroes, leading to an emotionally stunted, socially crippled adulthood, unable to deal with the real world. The other, of course, involves orcs.

[Spokesman-Review via the Wonket tip line]