Today's Battle For Most Terrible Evangelical: Pat Robertson Vs. Up-And-Comer Who Wants To Shut Ladies' Mouths For Them 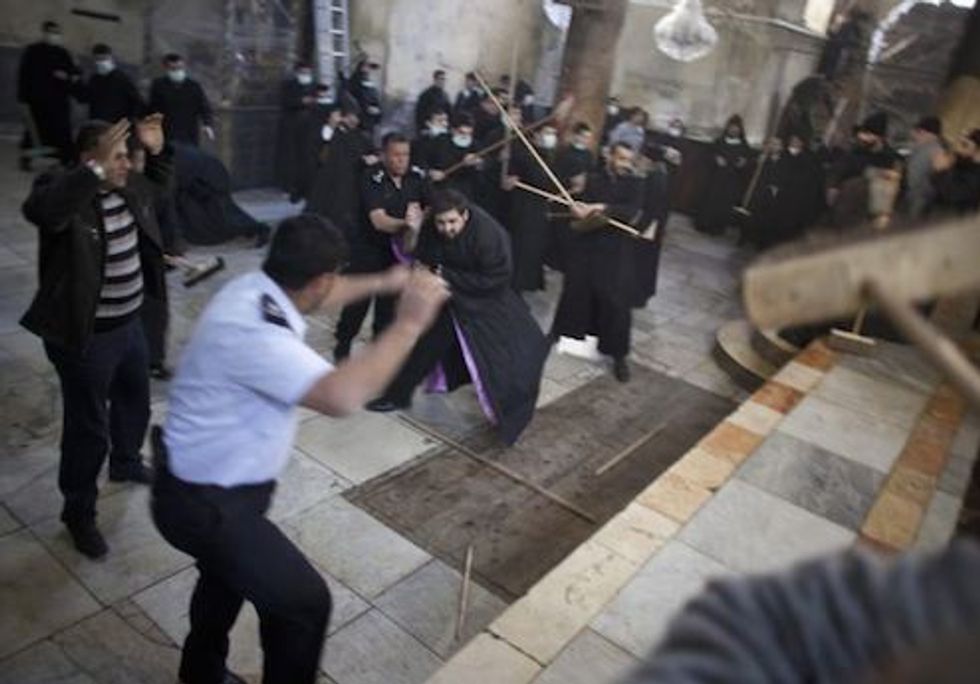 You knew it would happen. We've now got so much right-wing religious nonsense that we're having to double up, because otherwise we'll have to write 50 posts a day of this stuff. But only one complete evangelical nutter can win!

Who have we got for you today? In this corner, perennial favorite Pat Robertson, who is just wondering about how maybe those atheists are possessed by rape or demons or both. His challenger: the Obama-hating pastor who also too wishes ladies would come to his church but then just shut up. Let's get ready to rumble!!

Robertson comes out swinging in response to some lady who called up his 700 Club Hotline For The Religiously Overbearing to ask about whether she should keep god-bothering the filthy atheist she works with or just give up hope.

Robertson speculated that the colleague might be possessed by demons or a survivor of rape.

“I don’t know if you’re dealing with something that is demonic or something that is deeply ingrained,” Robertson said. “It’s something beyond normal human experience, something has happened and she associates God — maybe she had an abusive father, somebody who raped her and then acted like he was preaching to her from the Bible, you just never know what is going on in somebody’s childhood.”

Demons, rape, demon rape, father rape, whatever. Definitely something bad happened to this unbeliever, because otherwise she'd be more than open to having some harridan harangue her at work about Jesus. Ten points to Robertson for combining wild speculation with the grotesquely insulting.

Over to the other corner. First, a quick primer on the challenger, Steven Anderson. He gained some modicum of fame back in 2009 because of how he laid awake and wished Obama was dead EVERY SINGLE NIGHT.

Pastor Steven Anderson of the Faithful Word Baptist Church garnered national attention in 2009 when he told his followers that he prays for the death of President Barack Obama every night. After being contacted by the Secret Service, he insisted that he “didn’t say he wanted his parishioners to attack the president, he did say the country would benefit from Mr. Obama dying.”

He seems nice. So what have you been up to since 2009, Steven Anderson? Oh, just telling all the women in your congregation to shut their filthy whore mouths when you're talking.

“Now obviously,” he continued, “before the service begins, there’s chatting and talking going on, that’s perfectly legitimate. When we all sing praises to God, of course the ladies should also lift up their voices.”

“This is why I don’t believe women should say ‘amen’ during the preaching either. Because ‘amen’ means ‘truly’ or ‘verily’ … it basically means ‘that’s true.’ So when I’m preaching and I say something that you agree with and that you believe in, and you say ‘amen,’ you’re saying ‘that’s true.’”

We omitted all the Bible verse citing Anderson uses to justify this because we are a mommyblog and a warblog, not a religion blog. Ten points to the challenger for creative, selective, and really old time religion use of the Bible.

It's a tie! How should we decide who wins? Haha the answer is we all lose, because these people still exist in the world and still have people that listen to them.