Today's War On Christmas Casualties: Lights In Orange County, T-Shirts What Are All Sold 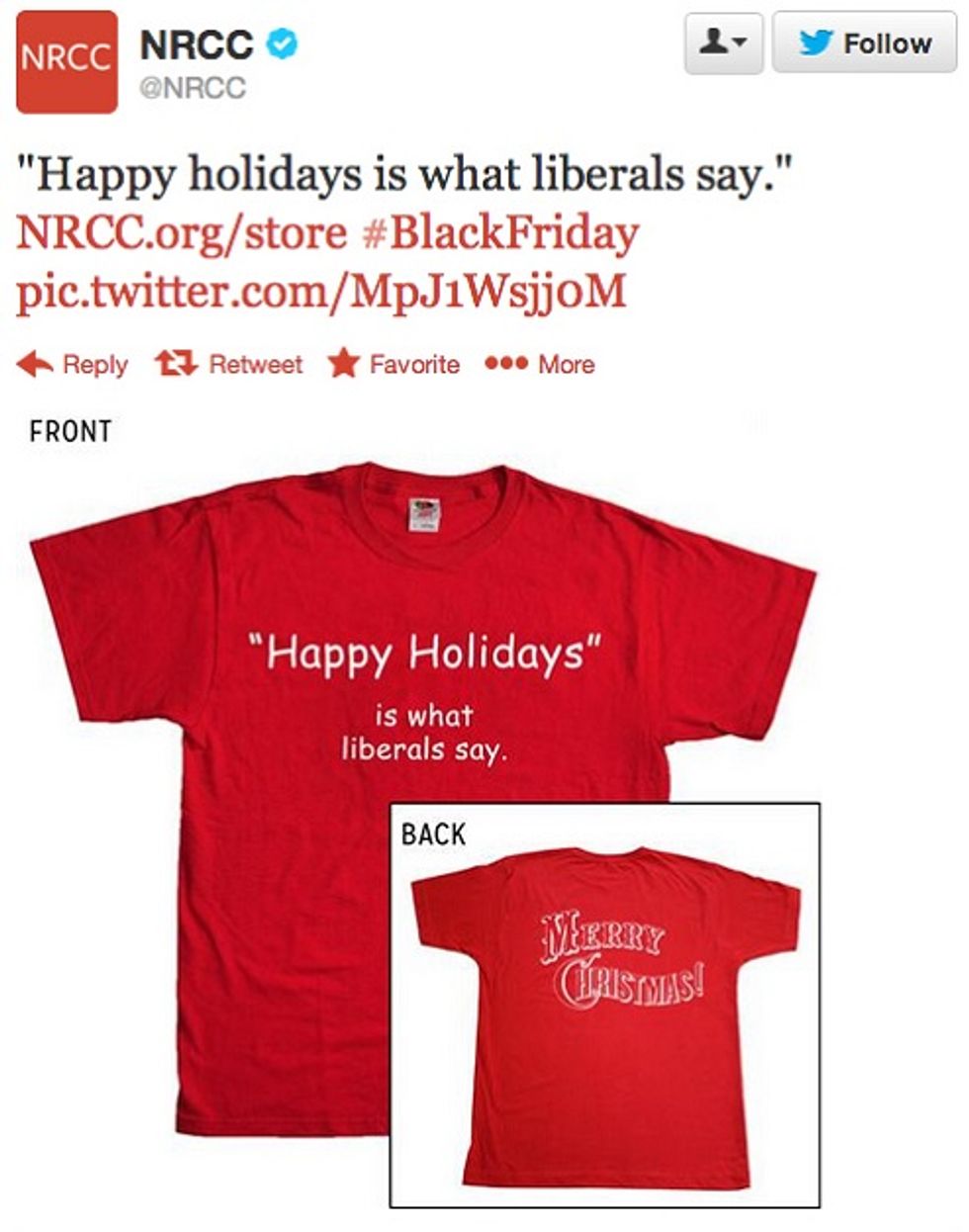 Rally the troops and calibrate your reindeer-seeking missiles -- War On Christmas 2013 is well under way. First up, we have this panicked report from Todd "The Feds will outlaw the Bible as Hate Speech" Starnes, who wants us to know that a neighborhood in Orange County, California, has been ordered to take down every single one of their Christmas lights* and they have to bow down to a graven image of Obama, too. Starnes quotes one homeowner's plaintive summary of the human rights atrocity unfolding on American soil:

“It’s horrible what they are doing to us and these poor kids,” one homeowner told television station KTLA.

The children! Won't someone please think of the children?

Prominent in the KTLA report but barely mentioned in Starnes' blog: The code violation is that the neighbors have strung lights from one house to another, and across the street, which, yes, would be a code violation. Because if one of the houses in the neighborhood catches fire or a toddler chokes on figgy pudding, it would be nice if emergency vehicles didn't have to contend with low-hanging strings of electric lights, right? Stupid nanny state, thinking of the children that way. Thanks a lot, Obamacare.

Our other Not-Quite-War-On-Christmas story comes from Buzzfeed, which rather breathlessly reports that the "National Republican Congressional Committee appears to have removed a t-shirt from its website" that says "'Happy Holidays' is what liberals say" on the front, and a big festive "MERRY CHRISTMAS!" on the back. What's that, did the NRCC have a moment of shame after people pointed out that maybe Jews say the same thing? And merchants, who like to be generic for the sake of selling to everyone?

Nahh, never mind. An update at the end of the piece notes, "A spokesperson for the NRCC said that the shirt was sold out." Apparently, nothing says "I Love Jesus' birthday" like being a dick.

Update: Courtesy of brand-new commenter "chrilter," here's the NRCC's very own First Strike on Christmas, from 2010. Good find, chrilter, and Welcome to the Monkey House!

* At least Starnes is implying that all the lights have to come down -- our guess is that the county only wants the homeowners to remove the obstructing lights that are in violation of code.