Todd Starnes Has Pee On His Mind Again 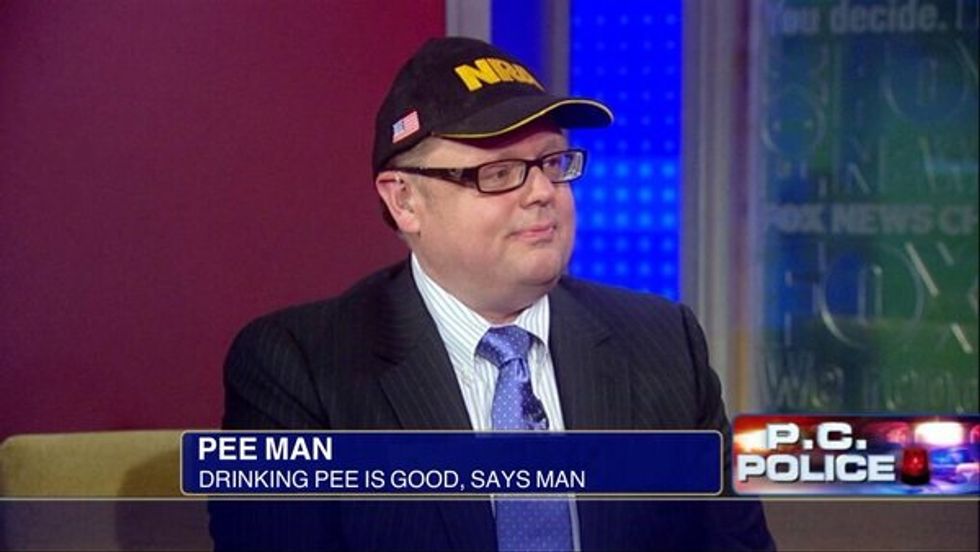 We don't know if he's serious or just taking the piss.

Fox News professional Christian victim and reputed pee enthusiast Todd Starnes was a wee bit angered by Attorney General Loretta Lynch's announcement that the Justice Department would launch a lawsuit against North Carolina's discrimination law, so he unleashed a torrent of HILARIOUS tweets Monday to illustrate exactly what kind of crazy, topsy-turvy world we live in. The stream started gushing shortly after Lynch's press conference, but eventually dribbled into nothing.

It started with a gag that was sadly derivative of Starnes's 2013 tweets following the Supreme Court's overturning the Defense of Marriage Act, in which he fretted "How long before federal agents haul pastors out of the pulpit?" and "Won't be long before they outlaw the Bible as hate speech." Eh, what the hell, you have a schtick, you may as well adapt it for new situations. And so:

Yes, there are few things less appealing than any combination of "Todd Starnes," "urinals," and "yanking." Still, it is a very funny joke, because if the transgenders use the toilets, there will be no need for urinals because ... um. Oh, we get it: trans activists are so radical, they think separate bathroom fixtures for men are discriminatory! Ha! Ha!

Was there more where that came from? You're in luck! There were! Todd had a whole bladder full of thoughts on the matter:

Again with the fluids? Then Todd got serious for a moment, focusing on his Number One concern: the very real threat of men showering with little girls, because that's pretty good for scaring the flock. And then he thought of another funny joke!

Dang, those liberals are stupid! They'll probably do exactly that, just the minute they finish seizing all the Bibles. Which is going to happen any day now.