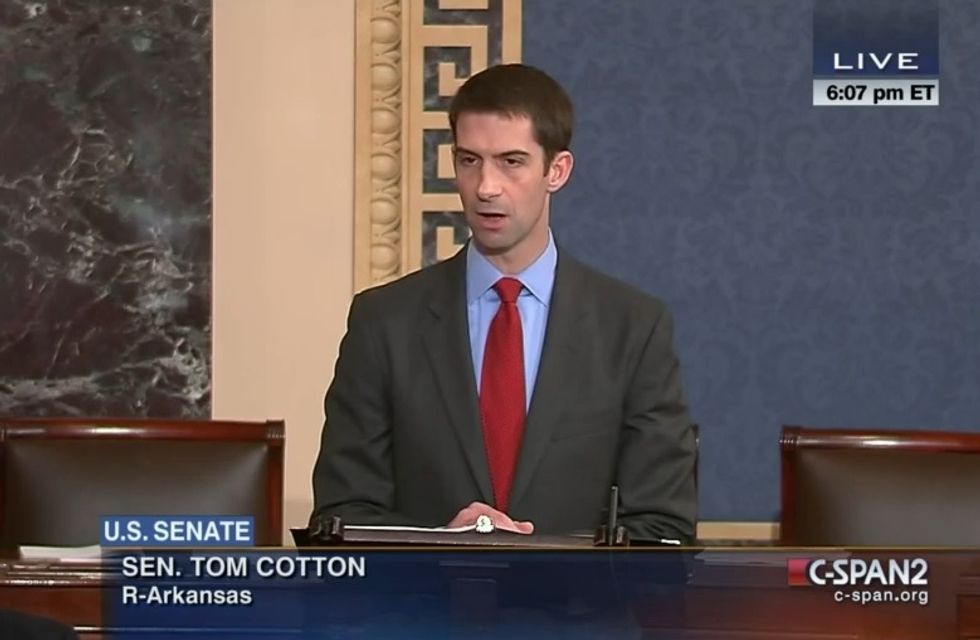 Brand new Arkansas Senator Tom Cotton has been a busy boy! After the rousing success of his dumb letter advising Iran that it shouldn't bother negotiating a nuclear deal because President Ted Cruz is going to bomb them anyway, Sen. Cotton finally got to give his First Official Speech to the Senate Monday night. And in what appears to be a Republican tradition, he warned that it is the mid-1930s and America is woefully unprepared to fight Hitler. It was an especially impressive performance, since he actually managed to get the Hitler analogy into the speech within the first minute, which is believed to be a new record for a freshman senator (John McCain still holds the overall record, having shouted "It's just like Chamberlain at Munich!" when awakened from a nap in 2013).

And what a terrific Hitler reference it was, even including a Surprise Twist:

"The world is growing ever more dangerous, and our defense spending is wholly inadequate to confront the danger. To be exact, during the last four or five years, the world has grown gravely darker. We have steadily disarmed, partly with a sincere desire to give a lead to other countries and partly due to the severe financial pressure of the time. But a change must now be made. We must not continue longer on a course in which we alone are growing weaker while every other nation is growing stronger."

I wish I could take credit for those eloquent but ominous words, but I cannot. Winston Churchill sounded that warning in 1933 as Adolf Hitler had taken power in Germany. Tragically, Great Britain and the West didn't heed this warning, when they might have strangled that monster in his crib. Rather they let the locusts continue to eat away at the common defense.

It's 1933, and we need to strangle a baby -- not a chicken, Hawkeye, a BABY -- so that the locusts won't eat all our guns and ships and nukes and planes! And most importantly, we need to stop Hitler, whoever he happens to be this time. Cotton couldn't quite say who the new Hitler is; instead, he just listed a whole bunch of maybe-Hitlers like ISIS, Iran, Putin, China, and maybe the University of Kentucky, which most NCAA brackets predict will blitzkrieg right past Maginot Tech.

Cotton accused President Obama of constantly apologizing for America -- we don't actually recall Obama ever saying, "Gee, America sure sucks and I'm sorry we do," but he must have, since that apology line is as mandatory in Republican speeches as vowing to eliminate ACORN -- and said that Obama's foreign policy has been "harsh and unyielding to our friends" and "soothing and supplicating to our enemies." (No, HuffPo, he didn't say Obama has been "suffocating" to our enemies. That's what Tom Cotton wants to do.) He also gave a nod to Reagan Math, insisting we need to reduce spending and launch a massive defense buildup. How he failed to jam a call for tax cuts in there, we'll never know. But then, this is only his first term in the Senate, and he still has a lot to learn.

So obviously, we need to spend a hell of a lot more on defense, because we are Britain in 1933, and thanks to the fools who believe the League of Nations is anything but a paper tiger, we're practically defenseless, while Hitler is completely ignoring the Treaty of Versailles. Not only that, but we hear on the wireless that the Eye-ties are poised to march on Ethiopia! Why aren't we building more Dreadnoughts and Spitfires, eh?