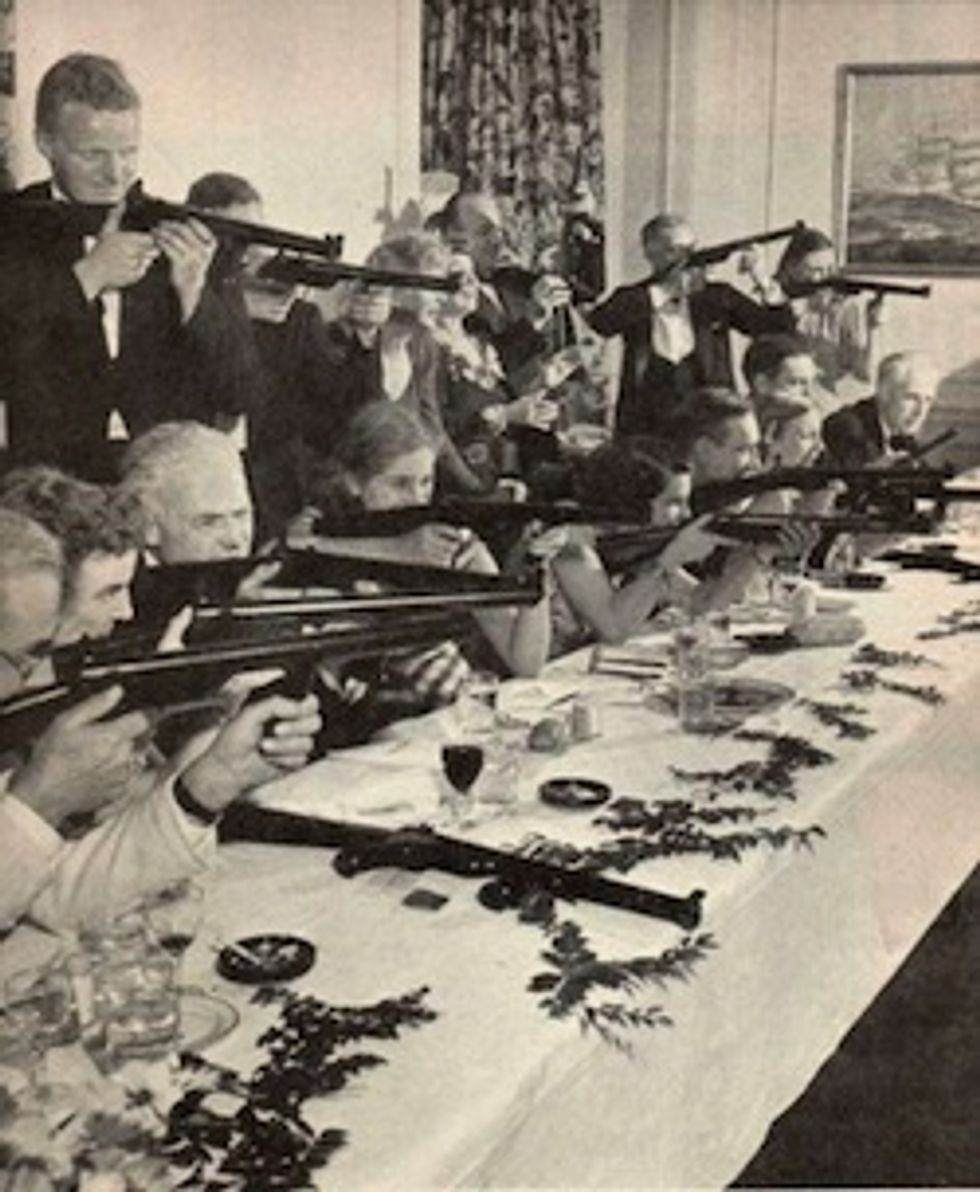 Oh god so there is a new Crossfire? Apparently there is a new Crossfire. We had remained blissfully unaware of this because we did good things in a former life. The Editrix told us we had to write a thing about it, though, so the first thing we did was head on over to the Google to learn more about this exciting new endeavor that kicks off with Newt Gingrich and some lady that is not Newt Gingrich nor many of the Mrs. Newt Gingriches. OH AND WE JUST FOUND OUT IT STARTS IN 17 MINUTES, AT 6:30 EASTERN. HURRY! HURRY TO THE TEEVEE FOR YOUR CROSSFIRE OH NO YOU ARE GOING TO MISS IT WHAT WILL YOU DOOOOOOOOOO!!1!

Wonkette isn't really your screenshot capitol of the world, but it bears mentioning that if you search for "Crossfire" on your internet teevee google machine, this sponsored ad is your first result:

To be fair, CNN might have overlooked its sponsored ad content because it was busy setting up a veritable multimedia world empire of vertical integration so you can experience Crossfire in every possible way. In fact, you'll be unable to escape Crossfire, no matter what you do.

The web site and live blog are both optimized for desktop and mobile. Viewers can watch clips from the show and learn more about CROSSFIRE in a special new CROSSFIRE section of the CNN apps for iPhone, iPad, Android phones, and the BlackBerry Z10 and the BlackBerry Q10.

Each day of launch week, GetGlue users can check in and share to their social networking sites that they are watching the return of CROSSFIRE. Once checked in, users can unlock limited-edition premiere stickers. The custom sticker set features an exclusive premiere sticker and five individual host stickers.

OK so anyway. Crossfire. Tonight, while you're shoveling food in your foodhole, you'll be glued to your teevee set to check out Newt and Stephanie Cutter, who apparently worked for Bamz so is probably a communist socialist fascist. The special guests will be Rand Paul and Robert Menendez, and this cartel of geniuses will discuss Syria. Yr Wonkette was planning on spending the evening licking tar until we learned that we could mob rule vote on things like the Founders intended:

Tonight, users will be able to join in the debate with hosts Newt Gingrich and Stephanie Cutter and guests Sen. Rand Paul (R-KY) and Sen. Robert Menendez (D-NJ), by voting on whether Congress should approve the president’s plan to strike Syria. User results will air during the premiere program.

Yeah, that sounds like it will end up being super-constructive and not lead to shouting AT ALL.

Maybe things get better when Crossfire uses its other all-star hosting team?

Van Jones and S.E. Cupp, meanwhile, will pair off on Tuesday’s edition. Gingrich said he anticipates the Crossfire team will be a “good group,” calling Cupp a “a very aggressive, smart young conservative activist” and Jones a “really engaged” liberal.

If there isn't a fight where S.E. Cupp takes off her glasses and grinds them into a fine powder onto Van Jones' face, this show is some bullshit appeasement non-muscular thinking liebrul nonsense.

There will also be some portion of the show where they force all these people to agree with each other because a nation demands it or something.

"The hope is that at the end of each show...we might have what we call a 'Ceasefire' moment where we actually try to explore any common ground that’s surfaced or any reason for hope that’s come out of this discussion," Jones told The Hollywood Reporter by phone on Wednesday. "We're not going to fake" any sort of takeaway though, he added.

Good lord the only thing worse than listening to these people shout at each other during dinnertime like your grandparents always did is the thought of listening to them try to find some morsel of common ground. We look forward to exciting "Ceasefire moments" like "we all like oxygen" or "cake is tasty" or "murdering each other on camera is bad for our careers."