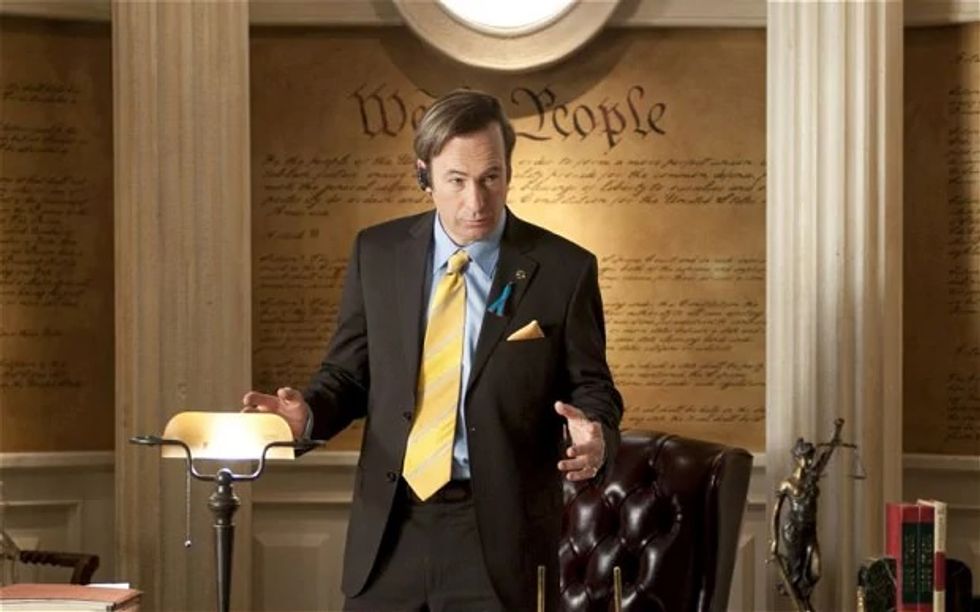 'Lawyers work hard and, like us, they're human, many of them' -- Dick Cavett

This is almost a nice time story, because while it's about some heinous fuckery most foul involving Immigration and Customs Enforcement, it's just plain old criming by a grifty ICE attorney, not some horrible official immigration policy turning America into an authoritarian hellhole people run away from to Canada. It's almost a breath of fresh air to learn that the chief counsel for ICE in Seattle, Raphael A. Sanchez, has been charged with two felonies after allegedly stealing immigrants' identities so he could then apply for credit cards in their names. The AP reported yesterday that Sanchez resigned on Monday.

And what a nice little scam Sanchez is accused of pulling! The sleazy Washington Post has the deets:

The charging document states that between October 2013 and October 2017 Sanchez used the personal information of seven immigrants to try to defraud several financial institutions, including American Express, Citibank and Bank of America. The immigrants were all “in various stages of immigration proceedings,” read the document signed by attorneys from Justice Department’s Public Integrity Section.

Isn't it delightful to see some evil in our nation's immigration system that has nothing to do with Donald Trump's Deport Everyone policies? Sanchez had been running his grift for years, so he can't even claim that Trump had inspired him to be dirty, as it were. Of course, there's always the possibility he'll be pardoned and given a job, since the administration keeps running out of people in top positions. He'd certainly fit right in.

The AP notes that the type of document used in Sanchez's prosecution, called an "information,"

can be filed only when a defendant has agreed to waive his or her right to be indicted by a grand jury; it’s typically an indication that a plea agreement is in the works.

And indeed, Sanchez is scheduled to enter a plea tomorrow. Possibly because he's agreed to a deal, the charging document isn't especially detailed on the seven immigrants whose identities Sanchez (allegedly) made use of, though it does go into detail on his (alleged) theft of the personal data belonging to a Chinese national identified only as "R.H.":

The charges state that on April 18, 2016, Sanchez sent himself an email through his government account containing an image of a U.S. permanent resident card and the biographical page of a Chinese passport issued to R.H. The email also allegedly contained a Puget Sound Energy bill in R.H.’s name for service at an address in a southern Seattle neighborhood with a large Asian population.

Property records list Raphael A. Sanchez as the owner of the address cited in the information.

How's that for a perfect stupid crime? Stealing the identity of someone applying for a green card (and apparently opening not just the credit card account, but also a fake utility account in their name?)? Was Sanchez also trying to deport the people whose identities he (allegedly) used, so they'd be less likely to show up and tell the credit card companies they'd been ripped off?

Yr Wonkette is not a lawyer, and we are only asking questions here. The charges against Sanchez are for one felony count each of wire fraud and aggravated identity theft, but if he was also misusing his own position as an ICE attorney to influence his (alleged) victims' immigration cases, that would be pretty damn big, no? Was that maybe part of a possible plea deal? Where can we find a good investigative journamalist when we're only a mommyblogger?

We'll keep you kids updated on this one if we find out anything more. We bet the Trump Justice Department will come down hard on any misconduct by a top counsel for ICE, because god knows they wouldn't tolerate some corrupt official tarnishing ICE's sterling reputation. After all, it's the only out-of-control federal agency Trump has never criticized.

Yr Wonkette is supported by reader donations. Please click here to send us money. Make sure you're you first, OK?