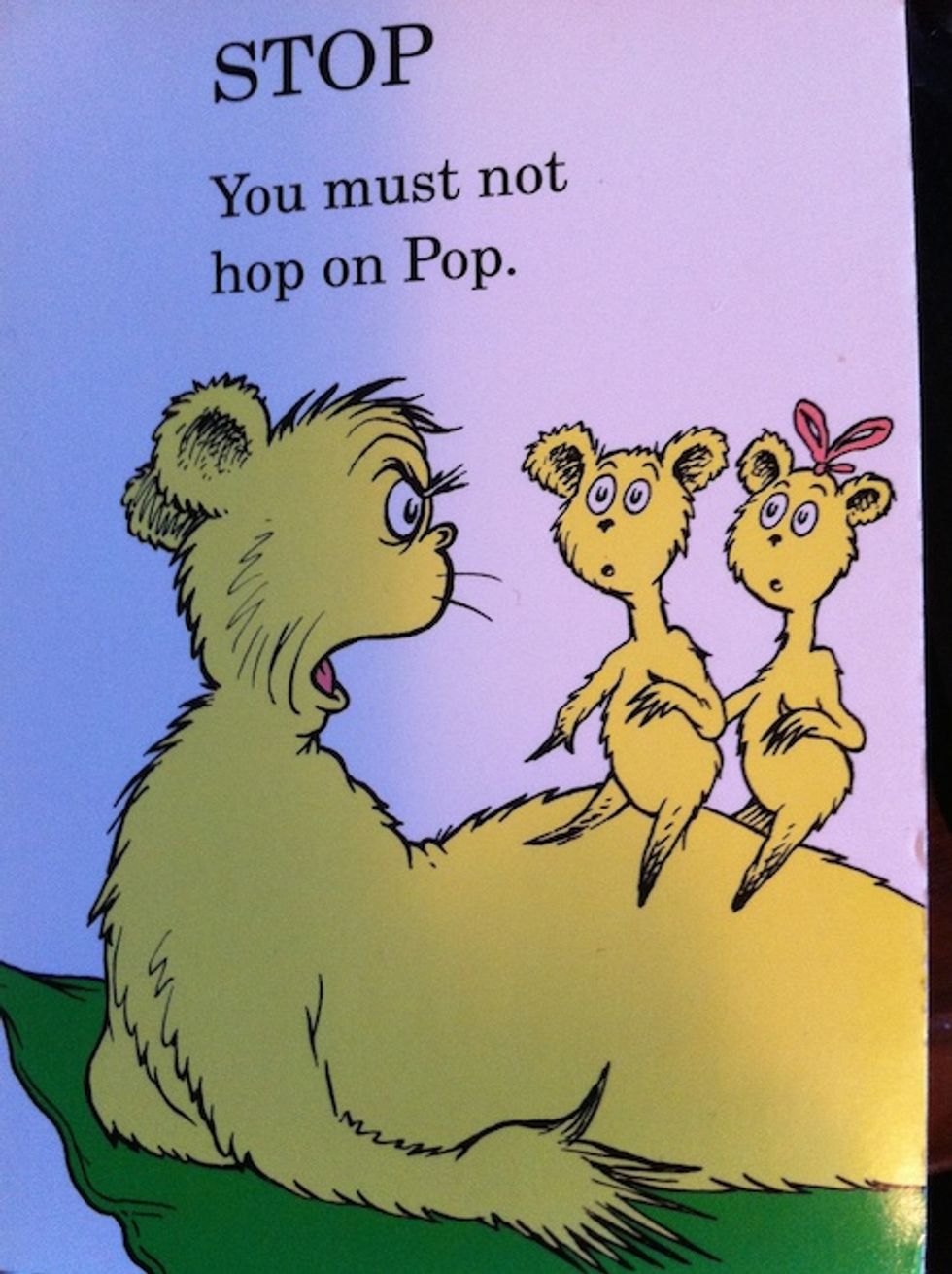 We're not really surprised to hear that some people have a sad about Dr. Seuss, what with the hippie tree loving manifesto that is The Lorax and the anti-arms race message of The Butter Battle Book. And let's not forget how mean Seuss was to poor old Tricky Dick. We didn't really figure that Hop on Pop, the favorite book for three-year-olds to get fixated on, would come in for much ire, yet apparently it does, in Canada.

A library patron asked the library's materials review committee to pull "Hop on Pop," a children's classic written in 1963, because of the book's violent themes.

"The complaint was that it was violent and encouraged children to be violent with their fathers," Vickery Bowles, the Toronto Public Library’s director of collections management, told CTV News Channel on Tuesday.

The patron recommended the book be removed, and requested the Toronto Public Library not only apologize to Greater Toronto Area fathers but pay damages resulting from the book's violent message.

OK, that has to be just some straight up trololololololing, right? Damages? Who would the damages be paid to? Would it be like a class action suit where every dad in Toronto would get some small slice of money as long as he could prove some level of internal injury from being pop-hopped? Also, too, Dr. Seuss and the library totally have immunity (shut up the law totally works that way in Canada we think) as the book specifically tells children NOT to hop on pop. Stop being so sensitive, Canadian dads.

"Killing Kennedy: The End of Camelot," by Bill O'Reilly and Martin Dugard, was said to contain falsehoods, because it concludes that U.S. president John F. Kenedy was assassinated by Lee Harvey Oswald alone, rather than by a group of conspirators.

The library ruled that the book would stay on shelves, because the theory that Oswald acted alone is one of the currently accepted versions of the assassination, and the library also loans books disputing the conclusion.

Somewhere in Toronto, a man is being dragged out of a library yelling "the single bullet theory is a lieeeeee" as he tries to tear O'Reilly's book into pieces.

Listen, Canada. Don't ban Dr. Seuss. Don't even ban Bill O'Reilly, even though you'd be better off learning your Kennedy history from new age crystals or meditation or any other fact-free exercise. However, Canada, we will agree with you on this particular proposed ban:

A DVD copy of "That's My Boy," starring Adam Sandler, showed "sick and illegal behaviour," a patron complained. However, the committee wrote that the customer had only watched 10 minutes of the movie, and felt that the rest of the film explained the repercussions of the behaviour. The film is rated 18A and cannot be borrowed by anyone under the age of 18.

That film should be banned AND should be rated "NA" and not available to be borrowed by anyone ever. Plow all available copies of that thing into the desert and forget it ever existed.