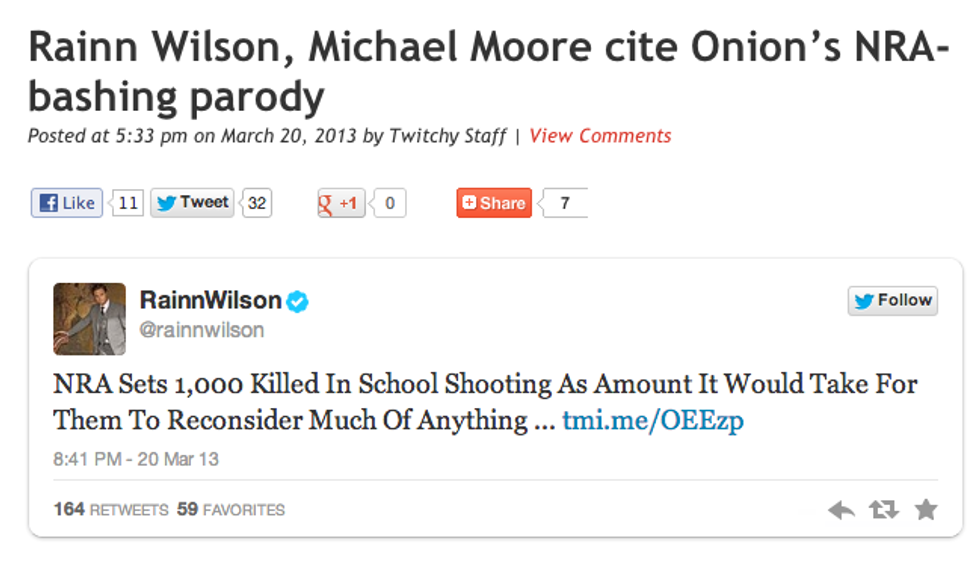 How is Michelle Malkin's House for Runaway Dwarves With Syphilitic Brain Lesions furthering the cause of conservatism lately? Like this: "Rainn Wilson, Michael Moore cite Onion’s NRA-bashing parody." In it, the unbylined "Twitchy staff" do a happy gleeful GOTCHA dance about liberal stupids. See, Michael Moore and Rainn Wilson tweeted out an Onion link -- and the Onion is a parody website! MICHAEL MOORE AND RAINN WILSON GOT SO TRICKED WITH THEIR TINY DUMB BRAINS HAHAHAHAHA! Oh, wait, but is there anything in either Wilson's or Moore's tweet to suggest they didn't know The Onion is a parody site? No? BECAUSE SHUT UP IS WHY.

Explain at us, Twitchy, why Rainn Wilson tweeting an Onion link proves he does not know The Onion is parody:

We’re not going to assume that Rainn Wilson’s views on guns and gun control would change if we pointed out that the NRA’s “dead kids threshold” exposed in his tweet originated at parody site The Onion. He must know it’s a parody, right? If so, he’s not saying, and at least a few followers were outraged by this shocking “fact.”

Yes, we wonder if Professional Comedy Person Rainn Wilson has heard of this newfangled gotcha factory, The Onion. If he has, he is not saying, so he must not have because LOGIC, which is the MATH SCIENCE of WORDS.

But yeah, like two of his followers did not click through or were dumb, and thought it was real.

Sorry Rainn Wilson, and Michael Moore also, BUT YOU BEEN TWITCH-SLAPPED!

Good thing she's busy explaining comedy to Rainn Wilson, or we might have gotten even more of her BURNS!